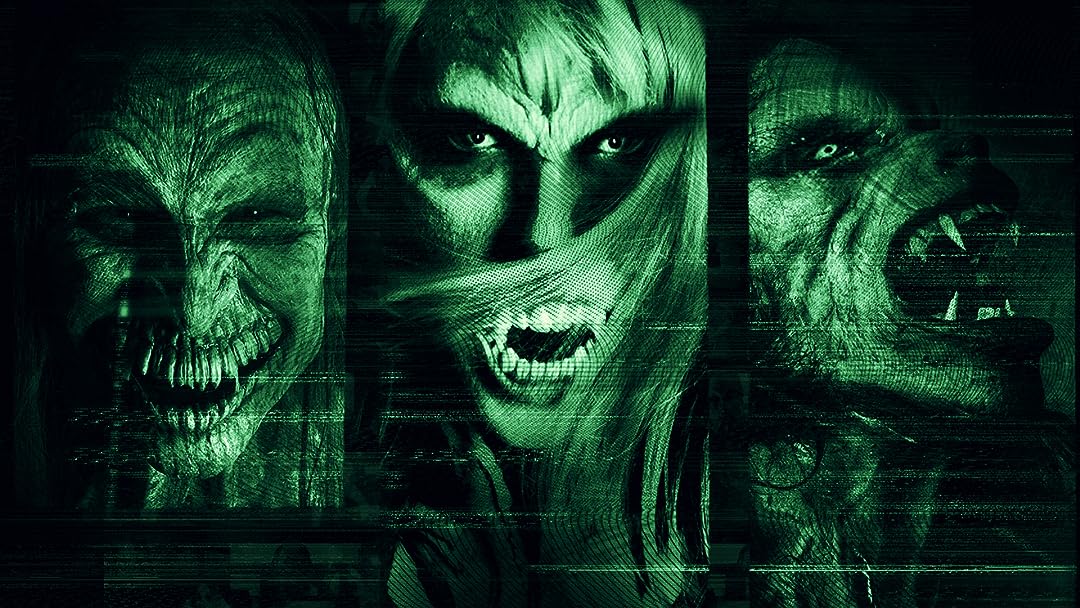 Horror GoddessReviewed in the United States on September 9, 2018
4.0 out of 5 stars
The rare fun horror flick
Verified purchase
This movie was so much fun... until the last five minutes.

I thought the premise and execution of the main plot were fascinating, fresh, and original. It reminded me of Cabin in the Woods with the grab bag of monsters. It does devolve into your typical shakey camera and off camera action of any found footage horror. The characters also did things that don't make sense in the real world, like taking the time to stop running and film what was happening behind them. However, as a true horror fan, I forgave all of that because I was having FUN!

The effects were much better than I'd expected, which is always a nice surprise when sifting through B horror. The acting wasn't terrible either. It had 5-star B-horror splattered all over the place, until the ending...

No spoilers written here, but I truly felt the ending was unnecessary. They had gold, but I guess they felt it needed another level of horror. If the movie had ended 5 minutes earlier, even with one of those flimsy "the final character dies" scenes, it would have been better in my opinion. I don't know, just my humble opinion.

Regardless, this movie was a blast. Well done.

Edward ZReviewed in the United States on January 29, 2019
2.0 out of 5 stars
Great first half that devolves into poorly lit shaky cam clichefest..
Verified purchase
Starts off so great, all the characters are interesting and fun, if a bit over the top. Of course you have to ignore the first person camera stuff and how silly it is finding excuses to always have a camera on.

The set up with getting all the monsters to the house is fun , and the interview portion was well done as well. Then the inevitable attack comes, and the movie just turns to crap. The lighting is absolutely terrible , and the shaky cam is the worst that I've ever seen. I don't understand the point of either, the special effects are actually pretty great, why hide them!?

All the characters just start yelling and acting like morons , and the once creepy and cool monsters just become nothing more than cliches to fight and run from. They try to throw in more character backstory during this portion and it just gets in the way cause who cares now .. And the ending just ruins the entire film ..

Maybe you'll be more forgiving then I , and I truly did like the first half. But the second half and ending destroyed the film for me ..
9 people found this helpful

Alan B. CringReviewed in the United States on January 5, 2019
5.0 out of 5 stars
Appallingly good
Verified purchase
This looked like it was going to be some kind of indy B-movie, and the first 15 minutes or so seemed to confirm that: the over-acting by Jamal and the somewhat stilted performances by other characters gave a false impression. The movie was obviously well-edited, with continuity that gave indications of genuine professionals. It was at about the point where the vampire was doing her interview that the movie got down to business. It was genuine, unrelenting horror, with believable acting by all of the characters; however, even though there were bloody scenes, it wasn't the usual slasher, gore-galore parade. The special effects were excellent, but I didn't really appreciate that until the credit roll, when they went back through brief clips of some of the scenes. The intensity took me off my usual cynicism watch and just dragged me along as I hoped for some kind of happy ending. Whether or not the happy ending arrives, you'll need to find out for yourself.
4 people found this helpful

M. NelsonReviewed in the United States on April 26, 2018
3.0 out of 5 stars
Not Bad
Verified purchase
I love me some monsters. As long as I can remember, monsters have been my genre bread-and-butter. Holy moley, do I love monsters! So, I gladly went into this film with admittedly muted hopes that I would enjoy it. It hadn't received the highest praise, but I wanted to give it a fighting chance. And I'm glad I gave it that chance. It's nothing that will top anybody's Top Horror lists, but it is pretty fun.

Some of the acting is overwrought and a bit clumsy. The characters seem to decidedly put themselves within danger numerous times which is frustrating until it comes together later. Some of the CG looks like CG, but that should be expected for a lower-budgeted film. I think it's forgivable. The editing is tight and, honestly, the monsters look fantastic, despite the CG. Overall, I'd say the direction is strong.

It's rare when films completely redeem themselves at the end, but I think this is one of them. So, give it a shot. It's not perfect, no. But, it's certainly worth watching on streaming. Perhaps even as a rental if you're as mental coo-coo ga-ga for monsters as I am.
4 people found this helpful

BureauReviewed in the United States on May 9, 2020
3.0 out of 5 stars
The Jump Scare Project
Verified purchase
In this movie, a small team of e-celebrities decide to up their e-fame by moving from staged scares, to slightly less staged scares. To this end, they put out an e-casting call for people who think they're monsters, agreeing to meet a vampire, a low-budget Samara from Ringu, and a skinwalker (aka werewolf) at a haunted house during a lunar eclipse.

Why do they think this will go viral? Beats me. It's clearly stated that three of the four team members don't believe that the interviewees were anything other than mentally ill, and since the interviewees aren't in on the act, I'd assume that their 'extrme' content was going to consist of some nice, calm, if eerily lit, interviews. The fourth team member, a recovering drug addict, has serious reservations, and is only along for the money and his role in the obligatory love triangle.

Fortunately (or unfortunately, considering this is an FF movie,) things do get plenty extreme as the film quickly kicks into the second act with demon girl lunging at the camera. From here it's essentially devolves into hide and seek, with the teens screaming and running and breathing heavily, and the occasional monster jumping out to shout "BOO!"

If you're into FF, and want to watch something that's fun, if rather brainless, this might be worth a watch.
One person found this helpful

Seattle guyReviewed in the United States on September 24, 2020
3.0 out of 5 stars
Starts out well, ends a mess
Verified purchase
Right off the bat, most of the acting in this is bad. When the minsters enter the plot, they carry a decent weight of serviceable acting and at times, even the main actors step up, but their performances are very uneven - the scene where the drug addict berates himself is great, but his banter at the beginning is forced and unrealistic.

The jump scares, once the action starts, are great, but then they quickly becoming overused and predictable.

The problem with this found footage flick is that it sometimes forgets it is one. Sure, the footage shakes, the atmosphere is dark, the film has its requisite jump cuts and demonic interference, but angles often don't make sense (the body cam on the skinwalker is on his shoulder, but when only his face looks through the crack in the door, that's what his body cam shows, things like that). There's a music score purely for the aid of jump scares and it serves no purpose other than to force the mood on you, or in most cases, fake you out.

Without giving away the ending, the villain(s) responsible for all this probably wouldn't want the footage out there at all, so the fact that it even exists breaks the rules of logic.

The premise and set up are intriguing, the buildup of the story at the beginning works, while the acting often doesn't. The special effects are uneven, sometimes great, other times as if the budget ran out.

By the time the end credits were rolling, I felt a little empty.

HoppyRooReviewed in the United States on January 11, 2018
3.0 out of 5 stars
Good for FF / low budget
Verified purchase
I'd "almost" lean more towards a 3.5 stars on this one, but I'm still just not a huge FF fan...

Briefly... I give mad props to whoever handled their special effects and makeup... by FAR some of the best I've seen in low budget FF films... and, since I love creature features, I thought it was really cool to have 3 of them in the same flick... and while others have claimed the acting was poor, I actually thought it was pretty well done... most of the lines seemed pretty believable... and I liked the backstory between a few of the characters... made them feel more "real"...

Downside... once again these movies suffer from shakey handcam syndrome ( and this one has some particularly bad scenes in that regard )... some of the lighting also left quite a bit to be desired... sound on the other hand was fairly reasonable...

Overall... in terms of FF / low budget horror flicks, I'd say this is certainly one of the better ones I've seen. So, if you are into that genre, I would highly recommend...
6 people found this helpful