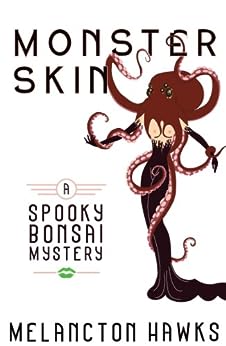 by Melancton Hawks (Author) Format: Kindle Edition
See all formats and editions
Sorry, there was a problem loading this page. Try again.
Inside Monster Skin it's a cool October in NYC. Pretty colors. Jack o' lanterns sitting on stoops. It takes place in 2005. When things were simple. The president was simple. Life was simple. Well, maybe not if you were in New Orleans or the Middle East or if you were Scooter Libby, but if you were a 16 year old named Spooky Bonsai, hell yes. Simple. Spooky's a native Brooklyn kid. A Japajew living with her karate instructor-cum-stepdad. Mom split. Dad is a box of bones buried in Green-Wood, across the street from Spooky's house. She spends her days learning the quadratic formula and her nights either getting her rocks off with beefy English bass players or scaling downtown apartment buildings to swipe designer clothing from snoozing models.

Abbie Foxton
5.0 out of 5 stars Erospiracy Psychofunk
Reviewed in the United States 🇺🇸 on July 14, 2013
Verified Purchase
I found a mind, through a book that trapped me in it's time slip. Monster Skin and I are like old friends now. The book that never gets filed onto a dusty shelf because it needs to seen, to be nearby, upon fingertips reach until something else comes close to its magick. A book that fills the pleasure void.

I've caressed her pages twice. I say her - and I know I am anthropomorphising - but this book is alive and a whole lotta woman! - the author, Melancton Hawks, is all man. Hawks has created a magnificent feminine force named Spooky Bonsai. She's 'half gefilte fish, half maki roll", hormone ravaged, acutely aware and hell bent on revenge. For Spooky, fashion is god and couture is an expensive temple to worship at. Like any 16 year old kleptomaniac she is good at acquiring the latest threads to feed her faith and match her luscious green lips. This is a character that needs to keep coming back into our lives just to make sure we are getting it right.

Monster Skin is a difficult novel to categorize or well, just to explain by quick synopsis - the earth could compress a diamond faster. Big characters burst with fun and menace, descriptive phrases flow out like tied magician scarves from its throat and you are left gobsmacked at its endless silken flow. Truly surreal feels all too real, like a nature documentary - the good the bad and the ugly.

Get attuned to the ear and rhythm of the book in the first two pages and then it takes off. Extremes of fantasy, descriptions fester and sweat and you smell it all between the lines. Streams of consciousness join seamlessly and become a truly poetic story. Hawks moon is "interminable cloud stained nicotine by a million lightglobes". Skyscrapers, "fleshy towers quivering in post orgasmic droop". When I read some paragraphs I see the world on the back of elephants, on the back of a turtle. Occasionally white specks explode with words to reflect and adore. It's futuristic but set in the past, a sci-fi bizarro world that feels all too familiar.

Monster Skin for me was an elixir, a mind medicine that celebrated storytelling, philosophy and ancient spectres that are so crucial to ones psyche. Like all good art, this book will evoke many different reactions. Take a look into Melancton's head, and make your own conclusions.
Read more
Helpful
Report abuse

Part of what makes Monster Skin so hilarious is Hawks' agility with urban teen vernacular. (Though I can't speak to the authenticity, as it's been ten years since I spent much time anywhere with a population density greater than 4 people/square mile.) His prose is saturated with youthful slang and pop culture references (circa 2005), and it zips along at the speed of a New York City subway.

What's weirder than a blue-haired girl who carries a stilletto? Well, let's see. Super-hot twin sisters named Honey and Sugar, one of whom is a supermodel, the other a drug-peddling, nymphomaniac hermaphrodite? A bat-winged squid-monster that feeds on the sexual energy of whomever it touches? George W finally getting his just deserts?

Yes, that's right, there is a wee bit of political commentary, sneaked in between the girl-on-girl anilingus and the virgin sacrifice (which is to say, the sacrifice of someone's virginity, naturally). It almost seems the author has something to say, if his audience is ultra-hip left-liberal urbanites who are so jaded it's impossible to get their attention without thirty pages of lesbian pedophilia and a ninja whose junk is locked in a male version of a chastity belt.

If that sounds like you, then by all means, purchase this book immediately. You won't regret it. If you don't fit that description, well, read at your own risk.
Read more
Helpful
Report abuse

Mr. W. J. Mcalees
5.0 out of 5 stars Monster Skin
Reviewed in the United States 🇺🇸 on May 11, 2013
Where do you start to review this thing, firstly you're either gonna love it or hate it, there is no middle ground!!! Personally I loved it, its what book are meant to be, its fun, passionate, fast paced, off the wall. Its like taking a walk through NY and just stopping to watch the characters pass by, or its like turning a corner in a Frank Miller comic, with characters out of Dylan's Tarantula just flowing off the page all larger than life. The lead characters are so stereotypical they're perfect from Spooky the high school kid with attitude, the nerd, the computer geeks, the porn star, even a nice cameo by the author all enlighten the pages. I would love to see the characters given the chance to ride again, which reminds me its nota book for puritan relatives, grandmothers or the young, it can in places be a bit explicit. Hey lifes too short give the book a try its well worth the effort.

I received this book free from the author in a Goodreads "firstreads" giveaway.
Read more
2 people found this helpful
Helpful
Report abuse

jason Nogin
5.0 out of 5 stars READ THIS BOOK
Reviewed in the United States 🇺🇸 on July 9, 2015
This book is just wonderful. once I picked it up I could not put it down, I highly recommend Monster Skin to anyone who likes Mysterious, all around great books. great for someone who's into some pretty raunchy s***. A+++++++ it was awesome to read and I'd love to see this book get the recognition it truly deserves.
Read more
Helpful
Report abuse

D.Clearing
5.0 out of 5 stars When I grow up I want to be Spooky Bonsai
Reviewed in the United States 🇺🇸 on March 12, 2013
Spooky Bonsai is to Lisbeth Salander as Stieg Larson is to Dashell Hammond...which is to say that Spooky is a heroine which walks near the line which divides the twisted from the innocent. This book is fast, hot and furious. It has all the elements of a satisfying trashy novel and yet is put together with enough elan and sophistication to keep you on your toes. I was continuously surprised and pleased by the way the story unfolded. I'm ready for the sequel.
Read more
2 people found this helpful
Helpful
Report abuse
See all reviews
Report an issue
Does this item contain inappropriate content?
Report
Do you believe that this item violates a copyright?
Report
Does this item contain quality or formatting issues?
Report