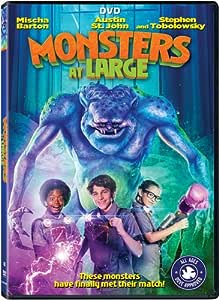 In this spooky family comedy, a teen task force that fights imaginary monsters finds itself face to face with the real thing. But you'll be laughing too hard to be scared!

Alex (Matthew Kosto) is a high school student just trying to navigate everyday life, crushes, schoolwork, teachers, bullies, and looking out for his little brother Gavin. After Alex's best friend Dylan (Auggie Pulliam) tells Gavin a scary story, the boy begins having nightmares and visions of a frightening monster. Gavin's nightmares are affecting Alex's sleep, which in turn lands him in hot water with his science teacher Mr. Phillips (Stephen Tobolowsky). Fed up, Alex turns to Dylan and an unlikely new friend, loner Phoenix (Alicia Del Aguila) to defeat the ''monster'' and put Gavin's fears to rest. After successfully helping Gavin, the crew becomes known as ''Monster Busters,'' now famous for their ability to extinguish imaginary monsters. However, the Monster Busters are not prepared for the appearance of a very real monster, which causes trouble for everyone and tests their friendships. MONSTERS AT LARGE is a super cute, thoroughly entertaining film for the whole family. Other than a couple of crude remarks, the film's content is clean as a whistle and manages to scare, delight and tickle without useless filler. The story itself is clever; it's told well and explores a barely visited genre: mildly funny, barely scary, kid-centered and in the style of GOOSEBUMPS (2015) or the Disney classic ''Under Wraps'' (1997). I like that the kids in the movie are witty, smart and resourceful; however, there never seems to be any real consequences for their shenanigans, which is usually the case with most children's movies. In addition to good, clean fun, MONSTERS AT LARGE has a great moral lesson, too. The value of sticking together and the added realization that you can't judge a book by its cover are subtle points in the movie. For these reasons, Dove is pleased to award MONSTERS AT LARGE the Dove Seal of Approval for All Ages. --Dove Review

MONSTERS AT LARGE: A Behind-the-Scenes Look

Linda Kelley
5.0 out of 5 stars Scary Funny and Entertaining
Reviewed in the United States on October 11, 2019
Verified Purchase
This Movie was an Entertaining movie that kept you on the edge of your seat if you wasn't laughing you were holding on tight to your Chair. I gave it a High Rating.
Read more
Helpful
Comment Report abuse

Crystal McRandall
5.0 out of 5 stars Like it
Reviewed in the United States on October 12, 2019
Verified Purchase
Cute
Read more
Helpful
Comment Report abuse

Michael Grösch-McCluskey
TOP 1000 REVIEWER
5.0 out of 5 stars ...with the VOICE talents of WILLIAM "Captain Kirk'' SHATNER.
Reviewed in the United States on March 23, 2018
Verified Purchase
This was QUITE entertaining, and kept my attention throughout.
Clever. Talented cast. Excellent cast; acting; direction; editing and
S F/X. William Shatner's voice-oiver was an added treat!