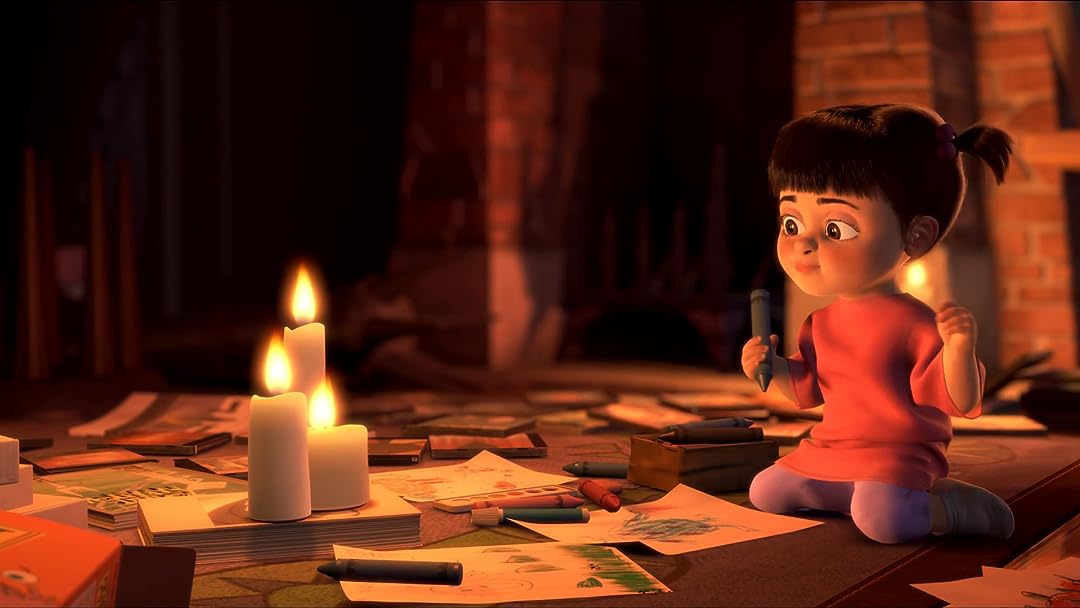 (20,825)
8.11 h 32 min2001X-RayG
Lovable Sulley and Mike Wazowski are the top scare team at MONSTERS, INC., the scream-processing factory in Monstropolis. When a little girl named Boo wanders into their world, monsters are scared silly, and it's up to Sulley and Mike to get her back home.

MomTeacherArtistReviewed in the United States on August 1, 2018
5.0 out of 5 stars
My fav DisneyPixar movie
Verified purchase
This is my favorite movie for the last 16 years. I’m a grown adult and I still watch it over and over. This time we watched it with my 4 year old nephew for his first time. Even though he fought it because he wanted Thomas he soon was mesmerized by the characters and the story. Every time I go to Disney I run to where Mike and Sulley are for photos. I’ve been with just Sulley, just Mike and the last time they were both there. Just love it! Wish I could find my dvd copy.....oh and Monsters University is great too!
24 people found this helpful

mkoyeReviewed in the United States on September 27, 2020
1.0 out of 5 stars
Missing Credits Scenes
Verified purchase
The following is missing from both the Blu-ray and DVD on this version of the movie:

The first three minutes of the credits should feature bloopers/outtakes similar to the credits of Pixar's previous two films A Bug's Life and Toy Story 2.

After a brief animated logo, the next three minutes of the credits should feature an extra scene that depicts Mike's company play, which is based on the events of the film.

The final final minute of the movie's credits should have included crude drawings of monsters and doors as Billy Crystal and John Goodman perform Randy Newman's Oscar-winning song "If I Didn't Have You."

The bonus disc just has some games instead of the missing footage above or any extra footage.

The Blu-ray disc has three extra short films which were definitely funny and cute. The first is with Rex from Toy Story, the second is with some birds that don't speak, and the third is with Mike and Sully. They are about 3 to 6 minutes each.

Chris McKinneyReviewed in the United States on October 21, 2018
4.0 out of 5 stars
The kids love it. It's a little scary for toddlers.
Verified purchase
Some of the monsters are pretty creepy so I would say parents should consider their child's temperament and ability to handle those types of images for their children ages 5 and below. There are also displays of anger and things at times that a small child might pick up on and imitate.
18 people found this helpful

TomArtReviewed in the United States on January 22, 2019
4.0 out of 5 stars
Great Fun!
Verified purchase
I saw this movie on DVD when it was first released in the format. It was a friend's that was borrowed, and after all this time, I decided that I wanted a copy of my own. This one is great insofar as there are the same special features, plus more (and for the most part, good).

The only disappointing aspect of this particular package is that the outtakes are not included. I really enjoyed the outtakes that were at the end of the other version I saw years ago. Neither the Blu-ray, nor the standard DVD, have them in this set. That's why I only gave it 4 stars. The outtake sequence is so hilarious that the tears run down your face!
10 people found this helpful

JeannieReviewed in the United States on November 7, 2021
1.0 out of 5 stars
Unwatchable
Verified purchase
The movie was great. It's a pity I couldn't watch the DVD because the movie kept pausing for a few seconds an average of every minute so I gave up partway through the movie! It's bad enough Disney puts in so much garbage before the movie even starts (btw, "Fast Play" is a lie because it adds previews before the movie starts) but the DVD is so heavily DRMed (which, btw, penalizes only honest people, not pirates), it's impossible to watch on an older player. Adding insult to injury, I have to ride the volume control because the music is so much louder than the dialog. Until Disney gets over their piracy paranoia which makes viewing their videos impossible to watch legally on older players and their greed for the additional royalties they get from forcing people to replace older players with newer ones, I will not be buying any more of their movies!
One person found this helpful

Tess MilbyReviewed in the United States on March 2, 2018
5.0 out of 5 stars
"UK Import" = Plays Normally in USA
Verified purchase
I was wary of buying this because it said "UK Import," but it plays no differently than any other blu-ray or regular DVD. In other works, it works fine in US Blu-Ray and DVD players. :-)
9 people found this helpful

Pirate77Reviewed in the United States on January 14, 2019
5.0 out of 5 stars
Excellent movie, international version
Verified purchase
"Monsters Inc." is a perennial favorite in our home and we enjoyed watching it in 3D. The only thing that bugged my daughter, who grew up with that as her favorite movie, is that in the international version there are some very minor differences where some signs have had wording replaced with symbols (Stalk/Don't Stalk, Scare/Don't Scare, etc.). The scene with the doors is quite amazing in 3D.
7 people found this helpful
See all reviews
Back to top
Get to Know Us
Make Money with Us
Amazon Payment Products
Let Us Help You
EnglishChoose a language for shopping. United StatesChoose a country/region for shopping.
© 1996-2022, Amazon.com, Inc. or its affiliates