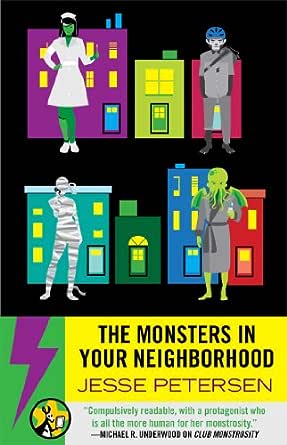 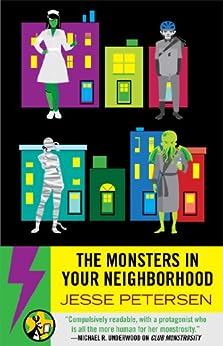 The Monsters in Your Neighborhood Kindle Edition

Lori Safranek
4.0 out of 5 stars Funny follow-up to Club Monstrosity
Reviewed in the United States on August 19, 2018
Verified Purchase
This sequel continues the Club Monstrosity story so well, I couldn't put it down. Natalie, the main character in both books, really evolved in book two. The relationships in the support group make sense as the monsters have spent more time together. Fun read.
Read more
Helpful
Report abuse

Sara
5.0 out of 5 stars Another great book by Jesse Petersen!!
Reviewed in the United States on August 25, 2013
Verified Purchase
I have read all the books in the Married with Zombies series & I just loved them. This book is just as good! It is funny & the plot moves quickly with plenty of action! If you are a fan of her other books, you will not be disappointed in this one! I only hope she continues both series!!!
Read more
Helpful
Report abuse

Kindle Customer
4.0 out of 5 stars Fun, flirty, good fun
Reviewed in the United States on December 8, 2013
Verified Purchase
I'm usually a serious soul and am focused in my career. It's books like this that allow me to entertain my inner, devious child and Petersen is the author to turn to. If you're feeling snarky pick up one of her books.
Read more
Helpful
Report abuse

Vicki Z
5.0 out of 5 stars Fun Read
Reviewed in the United States on February 5, 2014
Verified Purchase
Enjoyed the story immensely. You fall in love with all the members of the group, but I especially liked the witty snarkiness of Kai.
Read more
Helpful
Report abuse

Jessi
5.0 out of 5 stars Amazing, as usual
Reviewed in the United States on April 9, 2014
Verified Purchase
As per usual, Jesse Petersen does not disappoint. This sequel is just as intense, yet easy to read as the first.
Read more
Helpful
Report abuse

Dark Faerie Tales
3.0 out of 5 stars It's the age old battle of monsters versus humans, but brand new technology gives provides unexpected leverage.
Reviewed in the United States on August 5, 2013
Review courtesy of Dark Faerie Tales.

Opening Sentence: If only the Blob hadn't died, Natalie never would have been in this position.

The Monsters in Your Neighborhood picks up six months after Club Monstrosity. Natalie and the other monsters have fallen back into their normal routines. She and Alec are nursing their budding relationship and the group has welcomed a new member to the group, a Cthulhu named Pat. They all know it's the calm before the storm, the first hint? A video of a huge monster ripping the arm off some homeless man in Central Park goes viral on the internet and being as tech savvy as he is, Alec the werewolf is the first to find it. Because she works at the city morgue, Natalie is the one to confirm that this video is no prank. Her boss shows her the body of a hobo missing all of one arm. This video sets the whole group into motion, but one member seems a little off her game.

Linda the swam dweller is usually a sobbing, whining mess at the first hint of bad news. She is easily the single most annoying character I have ever had the displeasure of meeting. Natalie fully expects the full waterworks when she and Alec give the group the information about this video but instead Linda is cool as a cucumber and ready to act. I found it super odd that no one really commented on this. The only one who reflects on the extreme personality shift is Alec who suddenly notices how pretty Linda could be if she didn't have to wear her "human" make up all the time. It's a little odd how he takes several minutes to reflect on the colors of her scales and the fierceness she's been hiding from them all these years. Come to find out, the swamp dweller has a mysterious new boyfriend-another fact no one in this group decides to think too much on until it is entirely too late. As slow as the group is to pick up on Linda's sudden and extreme character shift, they are super quick on the uptake when Alec goes missing and then shows up a little less than two days later with memory loss.

Now between the video, the missing werewolf and the not so subtle sticky notes with the word WAR written above a VH signature, it's not too terribly difficult to figure out that the Van Helsing family is up to something. That something is a evil and genius plot that brings this book into the 21st century. Rather than spur up mobs of angry villagers themselves, the Van Helsing family has started a Twitter feed with the hashtag #killthemonsters which starts gaining followers almost immediately after the video surfaces. By posting videos and pictures of Natalie and the others, the Van Helsing's won't have to lift a finger to fight, crazy followers will do it for them. That's right. This war is now virtual.

I thought the use of Twitter and YouTube in this novel were creative and amusing, but it really took something away for me. It is stressed repeatedly in the story, how much the Van Helsing's hate the monsters. Every detail about this family features the looks of disgust and air of superiority the family feels over the monsters but for all that hate, for all that anger and built up years of aggression, all they are going to do is post some stuff on the internet? Really? Right before the battle they have plans and strategies and I got super psyched up for an intense fight, decades in the making. Peterson manages to get a fairly intense fight scene into the book and I really enjoyed reading it. It was what I had been looking forward to the entire time, but I was disappointed. The fight was short lived and ended in a way that left me feeling extremely let down.

Peterson kept her characters familiar and the plot moved forward quickly. It was a good sequel and I felt that she left an opening for a trilogy, but if that's the case I hope social media plays a smaller role.

FTC Advisory: Pocket Star/Simon & Schuster provided me with a copy of The Monsters In Your Neighborhood. No goody bags, sponsorships, "material connections," or bribes were exchanged for my review.
Read more
Helpful
Report abuse
See all reviews