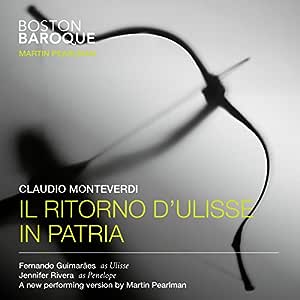 Il ritorno d'Ulisse' is unquestionably one of the three pillars that place Monteverdi among the greatest of opera composers; this recording marks the premiere of a new performing version by Martin Pearlman. Portuguese tenor and baroque specialist Fernando Guimaraes stars in the title role, alongside the internationally renowned mezzo-soprano Jennifer Rivera as his loving wife Penelope. 'Il ritorno d'Ulisse' was a relatively recent discovery, but following its authentication in the 1950s and revivals in Vienna and Glyndebourne, the opera has enjoyed new found popularity. Martin Pearlman's new performing version benefits from the same attention to detail that has ensured his reputation as a leading champion of period performance. His highly considered approach to all aspects of the score and performance ensure this version is true to Monteverdi's original vision. With a libretto drawing from Homer's Odyssey, 'Il ritorno d'Ulisse' is a riveting human drama with an enviable cast including: Abigail Nims (Melanto), Daniel Auchincloss (Eumaeus), Sonja DuToit Tengblad (Juno), Ulysses Thomas (Antinous), and Marc Molomot (Irus). Founded in 1973 by Martin Pearlman, Boston Baroque is already familiar to an international audience with its critically acclaimed catalogue of recordings. The three-time Grammy-nominated ensemble is widely regarded as 'one of the world's premier period-instruments bands' (Fanfare). Boston Baroque's recordings - of which Fanfare magazine wrote 'each one is an incomparable gem' - are heard by millions on classical radio stations in North America and Europe. Boston Baroque's many career milestones include the American premiere of Rameau's' Zoroastre'; a Mozart opera series, and the American period-instrument premieres of Mozart's 'Don Giovanni' and 'The Magic Flute'; and a revelatory exploration of the Beethoven symphonies on period instruments.

"Pearlman's vision does not offer perfect answers but no individual performance has ever got everything right-and it is always a pleasure to become reacquainted with the most under-appreciated of Monteverdi's three extant operas."
--David Vickers, Gramophone, June 2015

"A splendid Boston Baroque recording of Martin Pearlman's own new edition of the opera, released by Linn Records, shows this work to be richly textured and-thanks to fine performances by tenor Fernando Guimarães as Ulisse and mezzo-soprano Jennifer Rivera as Penelope-emotionally trenchant...Pearlman's stands up to any of them, and its emphasis on the psychological depth of the opera gives this 375-year-old work considerable resonance today, likely causing listeners to confront their own feelings about the use of extreme violence in a good cause."
--Mark Estren, Infodad.com, May 2015

"Employing a new performing edition of the score prepared by Martin Pearlman, who also conducts this performance, Boston Baroque's and Linn Records' recording of Il ritorno d'Ulisse in patria is a tantalizing reevaluation of an opera... Pearlman is to be applauded for eschewing the popular practice of interpolating music and text from other sources to replace scenes missing from the libretto and manuscript score...Boston Baroque's team of virtuosi execute their parts with considerable aplomb...A definitive Il ritorno d'Ulisse in patria is an evasive creature, but the one heard on these expertly-recorded discs is an agreeable, often enjoyable manifestation of Monteverdi's great genius. The grandeur of this Il ritorno d'Ulisse in patria is in the casting, however: Fernando Guimarães is an Ulisse whose homecoming is genuinely deserved, and Jennifer Rivera and Aaron Sheehan are a Penelope and Telemaco whose constancy merits a happy ending." --Joseph Newsome, Voix des Arts, May 2015

Stephen Midgley
4.0 out of 5 stars Musically a very good ‘Ulisse’
Reviewed in the United States on September 13, 2017
This is an enjoyable and well-considered performance of ‘Il Ritorno d’Ulisse in Patria’’. The work is taken by some to be the poor relation among Monteverdi’s three surviving operas, but I don’t share that judgement for one moment. The music, especially for its opportunities for fine singing, is glorious; there are some great tunes; it works well on the stage and the action can be riveting if well performed; and the human interest of the plot and characters is, by baroque-opera standards at least, both absorbing and realistic.

The existence of a single incomplete manuscript allows plenty of scope for widely differing interpretations, and such has been the case with the various recordings made over the years. The period-instrument ensemble Boston Baroque, directed by Martin Pearlman, take a fairly liberal view of Monteverdi’s score, adding cornetti, recorders and a respectable contingent of continuo instruments, all resulting in a very nicely balanced ensemble. So the various Sinfonie, for example, are imaginatively scored, with suitable embellishments from cornetti and others adding colour and variety. Some additional passages for instruments have been written into some of the arias, and instrumental playing is first-class throughout. The lead singers – Fernando Guimarāes as Ulisse and Jennifer Rivera as Penelope – are both excellent, and in fact all the vocal soloists do a very effective job. This is very much a studio recording, lacking a certain theatrical atmosphere or drama, but musically it is hard to fault. The tense drama of the central bow-drawing scene in Act 2 is actually very well conveyed.

The director’s own notes are excellent, and libretto and translation are supplied as well as an extremely useful synopsis, all in a booklet nicely illustrated with session photos. Recorded sound is good, with occasional traffic rumble in the background which will be evident on good stereo systems. Altogether, this is a musicianly and authentic-sounding performance of ‘Ulisse’, although my personal favourites are the recordings directed by Claudio Cavina and René Jacobs. I also understand, at the time of writing, that John Eliot Gardiner will be directing a new recording of the work in the near future.