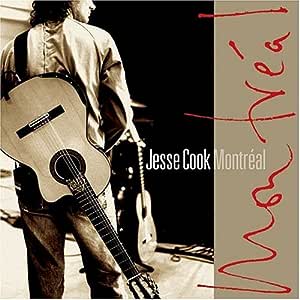 Jesse Cook is a worldbeat musician in the truest sense of the word; he doesnt just pick a style and repackage it, he is respected both by listeners and players alike for constantly seeking inspiration and tutelage from all over the world. A longtime fan of music from Spain, Africa, Egypt, Brazil, France and Cuba, Jesse Cooks Montreal evokes each of those countries and then some on this, his sixth CD and first live disc.

Cook has a history of hooking up with talented players; previous contributors to his million-selling catalogue include cellist Ofra Harnoy, fellow Canuck Holly Cole, and Brazillian jazz phenom Flora Purim. His choice of players for Montréal are equally talented; that point is made clear right from the opening cut, "Beloved." Fellow Canadian, Maryem Tollar sets the stage with her incredible, ghostly Arabic vocals; from that romantic, moody brilliance right to the discs undulating climax of "Baghdad," the perpetual motion of Gypsy Kings-meets-Cirque du Soleil sounds resonate throughout the disc. The audiences adoration of the performer and his wonderfully percussive live show (recorded at Le Festival International de Jazz de Montréal) allows the feverish applause to carry the enthusiasm over to the live disc itself.

There will always be a debate among purists as to whether accessible worldbeat or jazz is too easy-listening; ultimately, Cook is one part gifted guitar player, another part masterful showman. Even in the context of listening to a live CD, the energy that he gives to and subsequently receives from his fans on Montréal is contagious and musically rewarding.--Denise Sheppard

4.9 out of 5 stars
4.9 out of 5
55 customer ratings
How does Amazon calculate star ratings?
Amazon calculates a product’s star ratings based on a machine learned model instead of a raw data average. The model takes into account factors including the age of a rating, whether the ratings are from verified purchasers, and factors that establish reviewer trustworthiness.
Top reviews

Michael Wright
5.0 out of 5 stars Awesome
Reviewed in the United States on July 6, 2012
Verified Purchase
This was the first of Jesse Cook's albums I bought, and now, about six albums later, it is still one I love.

Yeah, it's a live performance, and you have the annoying people clapping and cheering coming out of your speakers and interrupting the music every now and then, some people don't like that, and typically I would agree with them - but this album makes an exception to the rule. This is one of the best albums of music I have heard. It is a concert, so it all flows together, there aren't it's not just a collection of songs, but a flowing piece, which in itself makes this album unique, but along with the incredible talent that makes appearances in this performance makes it remarkable.

Blending mid-eastern, Spanish, African, and who knows how many other musical styles together, Cook and friends have developed a style that is fast, vibrant and all their own. Some of the tracks that stick out in my mind are "Luna Llena" This recording has some of Chris Church's best work on violin, "Tempest" which is expanded with Nicolas Hernandez performing with Jesse, and "Mario Takes A Walk" with the Samba Squad (who bring an amazing amount of energy to the piece.) "Fall At Your Feet" rightly concludes the album, delivering a fine performance from all.

Despite the crowd in the CD, you will be hard pressed to find a better collection of these beautiful pieces of music, so if you're a fan of live performances, then this is for you, a fan of Jesse Cook - you're good to go, or a fan of fantastic music that is not afraid to explore: look no further.

My Hero
5.0 out of 5 stars Can't stop playing
Reviewed in the United States on May 14, 2016
Verified Purchase
I love, love, love Jesse Cook and this album contains many of his hits. My fourth CD by the talented guitarist. I just don't know why he is not more well known. The music is sensual, international, fast tempo, riveting beats echoing the sounds from around the world. A little bit Spanish flamenco, Middle Eastern, Far Eastern, jazzy, laid back, lively and all consuming with his passionate display of artistry.
Read more
One person found this helpful
Helpful
Comment Report abuse

MotoMac
5.0 out of 5 stars It doesn't get any better than this!
Reviewed in the United States on February 21, 2013
Verified Purchase
I chose the 5-star rating because 10-stars wasn't available! Jesse Cook is one of the finest guitarists in the country today, and with his band they put out incredible music. Being able to watch the performance makes the listening even better. This video, taken at the Montreal Jazz Festival a few years ago, takes you there to enjoy their superb performance in total. The range of music is broad, the quality is outstanding, and the performance was top-notch.

I would highly recommend this to anyone who enjoys music!
Read more
2 people found this helpful
Helpful
Comment Report abuse

Danielle
5.0 out of 5 stars Wonderful!!
Reviewed in the United States on March 6, 2018
Verified Purchase
Wonderful!!!! Seeing him in concert was the most fun ( his fans are quite enthusiastic:), and this CD brings it all back!!!
Read more
Helpful
Comment Report abuse

Avid Book Lover
5.0 out of 5 stars spectacular live performance
Reviewed in the United States on September 7, 2005
Verified Purchase
If Jesse Cook plays anywhere in the state of texas, I will go see him, especially after listening to this live cd, it tells me he is as good live as his studio cd s are. Find a comfortable chair and a good pair of headphones or sound system and enjoy, I'll be surprized if you're able to walk away before listening to this performance in it's entirety!!!! Hope you make many, many more musical offerings of this caliber, Jesse!!
Read more
3 people found this helpful
Helpful
Comment Report abuse

American
5.0 out of 5 stars Got it
Reviewed in the United States on March 31, 2020
Verified Purchase
I recieved it
Read more
Helpful
Comment Report abuse

Robert F. Weir
5.0 out of 5 stars A Whole New Look
Reviewed in the United States on February 1, 2006
Verified Purchase
I have all Jesse's CDs and enjoy them all. this one is different. While I can still enjoy his phenominal guitar playing and varied source of songs, there is a ton of percussion in this piece and the live audience really enlivens his work. I listen to most of his music and enjoy it immensely,this one I crank up in the car!
Read more
2 people found this helpful
Helpful
Comment Report abuse
See all reviews from the United States

Linda Arnell
5.0 out of 5 stars Exhilarating, exciting, an amazing mix of sounds - must be played at full volume!
Reviewed in the United Kingdom on November 22, 2013
Verified Purchase
First played for us by friends in Toulouse recently. We were bowled over. The musicianship is truly amazing. I defy anyone to keep still. All we want to do is get up and dance.
The mix of flamenco with Middle eastern influences is potent. Jesse's guitar playing is truly fantastic & the percussionists are brilliant.
Read more
Helpful
Sending feedback...
Thank you for your feedback.
Sorry, we failed to record your vote. Please try again
Report abuse