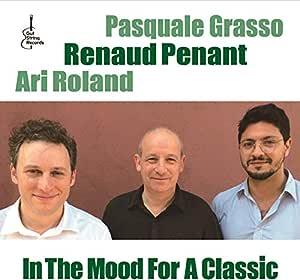 Add to Cart
$13.98
& FREE Shipping on eligible orders. Details
Sold by: Amazon.com
Have one to sell?
Sell on Amazon

In The Mood For A Classic

2017 release from drummer Renaud Penant, with guitarist Pasquale Grasso and bassist Ari Roland. The trio has performed regularly at the renowned uptown Jazz club Smalls, and in different jazz clubs across the city. Penant was born in France and has performed in every major jazz club in Paris and in various Jazz festivals, as well as in Germany and Italy. Since moving to New York City he has been fortunate to perform with musicians such as Bobby Porcelli, Bob Cranshaw, John Webber, Grant Stewart and Joe Farnsworth to name a few. Bassist Ari Roland, born and raised in New York City, rounds up the trio. He began working professionally at age 16. He studied at Juilliard and has played in the bands of jazz legends such as Lou Donaldson, Barry Harris and Betty Carter. Sketches From a Bassist's Album, his CD on Smalls Records, has received widespread critical acclaim. One of the most strikingly unique artists of his generation, Pasquale Grasso has undoubtedly changed the way the world views jazz guitar. Born in Ariano Irpino, Italy. Pasquale began playing guitar at a very young age. Barry Harris, the world-renowned jazz educator and bebop piano master, became an extraordinary influence when Pasquale attended his jazz workshop in Switzerland. Grasso has since become part of the Ari Roland Quartet and the Chris Byars Quartet, performing in clubs, music festivals, and recording in the studio regularly.