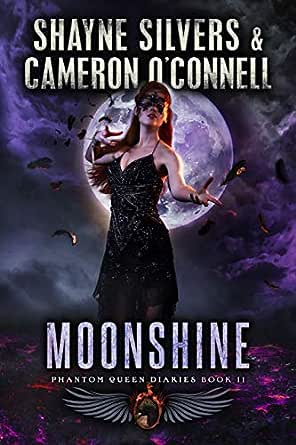 You've subscribed to The Phantom Queen Diaries! We will preorder your items within 24 hours of when they become available. When new books are released, we'll charge your default payment method for the lowest price available during the pre-order period.
Update your device or payment method, cancel individual pre-orders or your subscription at
Your Memberships & Subscriptions
There was an error. We were unable to process your subscription due to an error. Please refresh and try again. 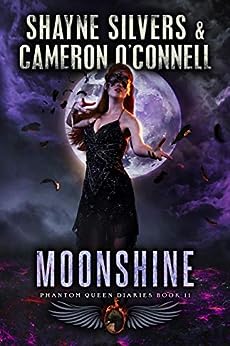 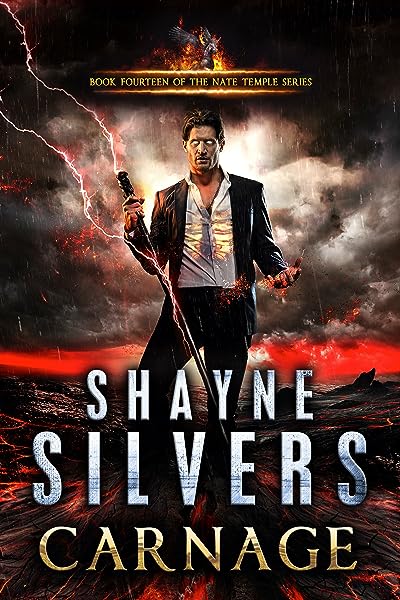 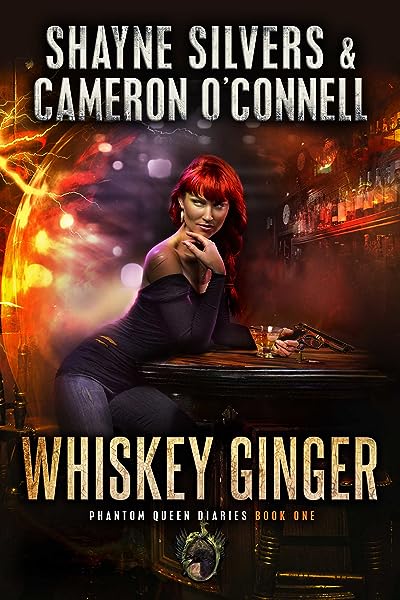 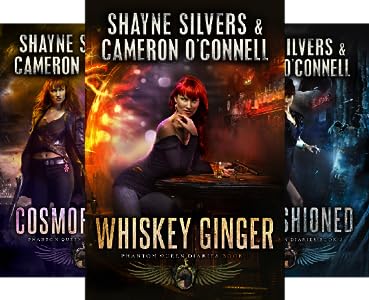 4.9 out of 5 stars
4.9 out of 5
260 global ratings
How are ratings calculated?
To calculate the overall star rating and percentage breakdown by star, we don’t use a simple average. Instead, our system considers things like how recent a review is and if the reviewer bought the item on Amazon. It also analyzes reviews to verify trustworthiness.
Top reviews

Laurie C. Davis
5.0 out of 5 stars Road Trip
Reviewed in the United States on July 15, 2020
Verified Purchase
Moonshine, the 11th book of the Phantom Queen Diaries by Cameron O’Connell and Shayne Silvers, was a refreshing ride with friends. It was full of action, great characters, supernatural elements and a meaningful story. A book that makes sense when it includes werewolves, witches and rednecks is a story that captures your imagination.

The book is about Quinn coming home. Coming home is the perfect description of the emotions that this book portrays. It’s about what happens when you are gone for a long period of time and discover life moved on without you. Quinn discovers things are not the same. Things are actually worse. When she finally sees a friend, Quinn has to prove who she is. A task that starts a chain of events unlike no other.

In order to fix the world gone upside down and to fulfill an oath, she must leave Boston again. It becomes a road trip that has so many curves and surprises, you will be so buried in the story that you will never want to rise again. A book you will not want to put down.

Cameron has once again proven he is a master storyteller. He has woven an incredible story that is filled with the best parts of what makes Moonshine a great urban fantasy book. It is a perfect escape into the TempleVerse world that is magical and fun.

alliwolfchild
5.0 out of 5 stars Quinn rocks!
Reviewed in the United States on August 5, 2020
Verified Purchase
This was the most satisfying Quinn McKenna book to date. While all the books have been excellent, this one really spoke to me. The choices Quinn has to face In this book touch home in a way that that also touches my heart. Even though she might face the challenges head on as a god, they parallel choices we as humans must make every day between good and evil, right and wrong. Our monsters might be different, but they are no less real. Seeing Quinn make choice after choice for the good of others is nothing less than awe inspiring.

Thank you, Shayne Silvers and Cameron O’Connell, for creating such a likable, strong, and just plain good character as Quinn. It takes true talent to make a character as relatable as Quinn. She’s so down to earth that you make me feel like she could easily be my next door neighbor.
Read more
Helpful
Comment Report abuse

Lora S.
5.0 out of 5 stars Quinn reunites with some old friends
Reviewed in the United States on July 16, 2020
Verified Purchase
Quinn Mackenna is reunited with many of her old friends and discovers what it is she fears about letting her goddess personality out. A good time is had by all as Quinn, along with Max, Morgan le Fay, and the Sickos, the group of paranormal FBI agents once led by Nate Temple’s friend the werewolf Gunnar which now includes Quinn’s childhood friend Jimmy Collins and the Valkyrie, Hilde, whom Quinn needs to induce to return to Freya in Asgard so that Quinn doesn’t become Freya’s slave forever battle a Gancanagh who has been causing untold trouble among all the Freaks in both Boston and Missouri.
Read more
Helpful
Comment Report abuse

SickPuppy
5.0 out of 5 stars What's in a Kiss?
Reviewed in the United States on July 15, 2020
Verified Purchase
Quinn's finally back in Beantown, but things aren't as she left them. There's a new power in town, and it's hunting Quinn. Her friends have been imprisoned or gone to ground. Quinn, herself is penniless and homeless, having been gone for eighteen months. So, obviously, resources are scarce. And she's under obligation to find a certain Valkyrie for a certain Norse goddess.
So Quinn has nine days to find the warrior, save a friend and, evidently, save the world. Again.
No pressure.
This might be the best Quinn yet. Fast-paced fun, and Morgan LaFey is a hoot!
Read more
2 people found this helpful
Helpful
Comment Report abuse

lkp
5.0 out of 5 stars This story is spellbinding!
Reviewed in the United States on July 15, 2020
Verified Purchase
Our favorite redhead is back and sassing her way through the best Quinn story yet. She returns to Boston eighteen months later to find it almost unrecognizable and seemingly friendless. With time ticking down, Quinn gets help from old allies, both friendly and unexpected. Can she help solve a string of gruesome murders in time to fulfill a promise? Or is she doomed to serve a goddess for all time.
I could not put this book down, finishing it in one sitting. Mr. O'Connell sucks you into Quinn's world from page one and does not let go until the end, leaving you in awe and wanting more.
Read more
2 people found this helpful
Helpful
Comment Report abuse

RS9
5.0 out of 5 stars Quinn returns to Boston
Reviewed in the United States on July 17, 2020
Verified Purchase
Quinn returns to Boston and realizes since she has been gone for 18 months, most people have considered her dead. Because of sightings of her previous adventures in the underworld, most considered it to be true. What she finds in Boston are huge changes and while trying to deal with that, she has to take a trip to Branson where she finds all sorts of related problems. I had hoped thos book would have answered some previous questions from other books instead if creating new ones. Overall a good read.
Read more
Helpful
Comment Report abuse

Dana Audette
5.0 out of 5 stars Quinn at her best! Moonshine packs a punch and keeps you intrigued until the end!
Reviewed in the United States on July 15, 2020
Verified Purchase
Moonshine is the best Quinn adventure yet! It's 100 proof that packs a punch and keeps you reeling until the very last word. Quinn is a gritty warrior that will go to great lengths to protect to those she loves and protects. There's witches, fae, and werewolves, oh my! With the help of some old friends Quinn met along the way, she fights her way to save the day. Pick up this book to see for yourself how dynamic this adventure is! I simply couldn't put it down
Read more
One person found this helpful
Helpful
Comment Report abuse

The Mad Mrs. Rose
5.0 out of 5 stars Quinn's back in town!!
Reviewed in the United States on July 15, 2020
Verified Purchase
Another incredible book in the Phantom Queen Diaries series! A reconnect....(for those of you loving these books) to quite a few of the characters in past books. Quinn is back in town! After everyone she knows thought her dead.....she's back to everyone's rescue again. Only there might be a few things she hasn't mentioned....like that pesky deadly goddess thing. Snark, intrigue, hotness and hilarity! I recommend!
Read more
Helpful
Comment Report abuse
See all reviews

Michael Brown
5.0 out of 5 stars Finally back in Boston!
Reviewed in the United Kingdom on July 14, 2020
Verified Purchase
So Quinn is finally back home in Boston, but shes been away for a year and a half, most of her friends/acquaintances thought she was dead, but there is a new power that has taken over her hometown and is actively hunting Quinn! Not only that but she has a promise to fulfill for Freya otherwise she will be bound to the Norse Goddess for eternity!

This is Quinns best book yet, and you can see that Cameron O'Connell has been improving as each book is done. It was like a feast for your eyes that was over far too soon. I look forward to seeing what is going to happen in book 12.
Read more
One person found this helpful
Report abuse

Helen Cotgreave
5.0 out of 5 stars Truly amazing a must read
Reviewed in the United Kingdom on July 15, 2020
Verified Purchase
With each new book in the series the writers for Argento Publishing surpass themselves and Moonshine is a perfect example of this.
The story arc details and characters are fantastic Quinn from when we 1st meet her in Whisky Ginger to Moonshine has changed a lot with each new adventure and I can't wait to find out what will happen next.
Cameron has written an incredible story one I highly recommend
Read more
One person found this helpful
Report abuse

Judie
5.0 out of 5 stars Moonshine delivers a powerful punch that will knock you down,shakes you up and set you up again.
Reviewed in the United Kingdom on July 15, 2020
Verified Purchase
Wow.....what can I say....the best Phantom Queen yet....this one hits the road running and doesn't stop....
The authors have outdo one themselves with this one...can't wait to read the next. Welcome back to some old friends, with new stories of their own to tell. New alliances made and a family reunion to deal with.....
Read more
Report abuse

H
5.0 out of 5 stars Best Quinn Book yet
Reviewed in the United Kingdom on July 29, 2020
Verified Purchase
Originally, I only read the Quinn books to complete the whole Templevrse books but they are getting increasingly better and Quinn is a lot less irritating. I enjoyed Moonshine and it was ifficult to put the book down.
Read more
Report abuse

Chilipepper
5.0 out of 5 stars Homecoming
Reviewed in the United Kingdom on August 20, 2020
Verified Purchase
Well written and paced, this story tells of Quinns return to Boston and the changes she finds there. Friends are missing and there is a mystery to get to the bottom of.
Read more
Report abuse
See all reviews