More Bull and millions of other books are available for Amazon Kindle. Learn more
Share 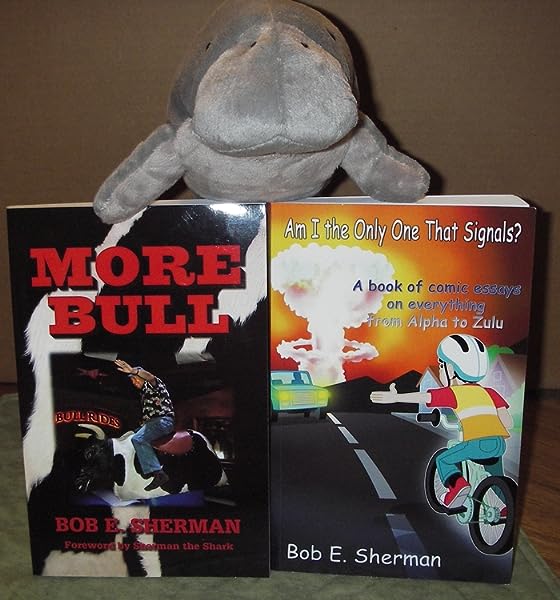 by Bob E Sherman (Author)
4.7 out of 5 stars 3 ratings
See all formats and editions
Sorry, there was a problem loading this page. Try again.

More Bull is an anthology of letters and articles written by Bob E Sherman. The articles appeared in his column, Dead Reckoning, in the Waterfront Times. The articles and letters are a humorous look at boating, politics and life.
Read more
Previous page
Next page

Bob E. Sherman was born and raised on the Jersey Shore. He attended MIT (Milwaukee) to be a diesel mechanic. He transferred to The U(Miami) to study marine biology before getting his degree in accounting. He is a retired CPA, former licensed USCG captain, and former columnist for the Waterfront Times. He lives is Venice, Florida and is the author of four books of Provocative Humor.

Start reading More Bull on your Kindle in under a minute.

Bob E. Sherman was born and raised on the Jersey Shore and nobody would lie about that. He attended the Milwaukee Institute of Technology (MIT) or "Mother I Tried" by those who knew better, and graduated from the U.

He enrolled at MIT to be a diesel mechanic then transferred to The U to study marine biology before getting his degree in accounting. He has lived in Florida most his adult life where he has never missed the four seasons. He spent two years in Brasil where he learned that young children can learn a second language easier than adults can, a fact that the American school system has still not figured out.

He is or was a CPA, CMA, factory trained Evinrude mechanic, licensed yacht salesman and licensed USCG captain. He has served as director and treasurer of his condo, dockmaster of the condo marina, President of a cemetery, Commodore of a yacht club, and member of the Hallandale Marine Advisory Committee.

He's a former columnist for the Waterfront Times, and yacht charter captain.

Kenneth Langbauer
5.0 out of 5 stars More Bull by Bob E. Sherman
Reviewed in the United States on January 14, 2012
Verified Purchase
A good read. Bob E. Sherman's style, although sometimes confrontational in content read by a full fledged Democrat and a follower of MSNBC, had me thinking and understanding another point of view without listening to FOX. The moving around on subjects made for an interesting read. Marie climbing to the tuna tower, Cynthia, my mother, in her PFD and the Glimmer Glass brought back memories of my childhood, as Bob E. and I knew each other in Manasquan. I recommend this read to any boat owner. This is universal in the life and times of any boat owner.
Read more
Helpful
Report abuse

Jerold B. Pozner
4.0 out of 5 stars Great Bull
Reviewed in the United States on November 21, 2011
Take a trip with the adventures and lifetime experiences of Bob E.Sherman. Read both his fresh political and nautical views. This book is a sequel to his last book "Am I The Only One Who Signals." The answer is yes to the last sentence. Join the readers like a revolving door that keeps going until one feels that they are on the boat with him or on the senate floor with Bob E. Great descriptions and dialogue. A must read. Order this book.
Read more
Helpful
Report abuse

SueEp
5.0 out of 5 stars Always Amusing
Reviewed in the United States on February 23, 2012
Sherman is the boomer generation's observer and complainer. He notices the smallest thing and blows it up, takes the reader up with it, and lets you LOL. The writing is succinct and well edited this time around. Very enjoyable.
Read more
One person found this helpful
Helpful
Report abuse
See all reviews
Back to top
Get to Know Us
Make Money with Us
Amazon Payment Products
Let Us Help You
EnglishChoose a language for shopping. United StatesChoose a country/region for shopping.
© 1996-2021, Amazon.com, Inc. or its affiliates