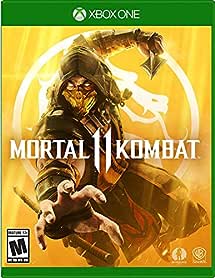 Mortal Kombat is back and better than ever in the next evolution of the iconic franchise.

The all new Custom Character Variations give you unprecedented control to customize the fighters and make them your own. The new graphics engine showcasing every skull shattering, eye popping moment, brings you so close to the fight you can feel it. And featuring a roster of new and returning Klassic Fighters, Mortal Kombat’s best in class cinematic story mode continues the epic saga over 25 years in the making.

4.7 out of 5 stars
4.7 out of 5
2,665 global ratings
How are ratings calculated?
To calculate the overall star rating and percentage breakdown by star, we don’t use a simple average. Instead, our system considers things like how recent a review is and if the reviewer bought the item on Amazon. It also analyzes reviews to verify trustworthiness.

Tom
4.0 out of 5 stars Back to insane Fatalities
Reviewed in the United States on April 23, 2019
Platform: Xbox OneEdition: StandardVerified Purchase
Micro transactions are a symptom of a greater issue in the gaming industry, rather than a symptom of a mere fault that MK 11 suffer from. This game is excellent, however, despite the multiple ways by which this game is monetized. The game is more like the Mortal Kombat reboot, rather than Mortal Kombat X. I had many issues with the in-game economy in X, mainly because it was designed in such a way as to physically prevent me from enjoying the krypt and other end game content without feeling like I had to grind in order to enjoy the game. MK 11 however, gives you the means to unlock everything in the krypt, although it IS worth mentioning that the greatest problem lies in the sole fact that the chest contents within the Krypt are entirely randomized. The chests seem to send a ping to the server which returns random loot that changes every time, and this is a problem because you can’t simply ‘look up’ where the more fruitful rewards are located. Instead you just have to get lucky, and that kind of sucks. The main modes consist of towers(challenge/classic) and Story mode. Although I haven’t completed the story, I read that it hovers around 6 hours and from what I’ve seen so far, it seems to maintain a high level of quality throughout. In terms of graphics....well, the game actually looks fantastic. I felt somewhat cheated with MK X because it didn’t seem to carry that level of shine that the reboot had, but this one turns that problem on its head and delivers gorgeous visuals in both the character modeling as well as level design. The combat is also top notch, with ‘X-ray’ style moves that zoom in on body parts when certain actions are undertaken, and the flashiness of ‘finishing moves ‘(non fatalities) are a sight to be held as well. Fatalities also look great, with a high level of film grain and gory goodness to gawk at each and every time you see it. Overall, I’d say that if you’ve been a fan of the series since the Mortal Kombat reboot, this one will surely keep you entertained for a while. The krypt is fun to explore(it’s in third person now), the story is a fair length and enjoyable, and the towers are always a blast to run through. Sometimes the challenges and enemy modifiers can be annoying, but luckily there are consumables to use to give you a fighting chance. The developers plan on continuing to rotate out in-game store content, challenge towers and tournaments so there will be a continuous flow of content to enjoy in the coming months, including 6 new characters(sadly you’d save in the long run by spending $40 on the Kombat pass). Hopefully my overview gives you a good idea what to expect here. This is definitely a fighting game worth picking up. It’s honestly one of the best fighting games I have played in quite some time.
Read more
41 people found this helpful
Helpful
Comment Report abuse

Musicman22
5.0 out of 5 stars Why are you reading this?
Reviewed in the United States on May 1, 2019
Platform: Xbox OneEdition: StandardVerified Purchase
Seriously why? Just buy it. Its fun, it works, and it mk11. Stop reading it go kill someone...... in game.
Read more
30 people found this helpful
Helpful
Comment Report abuse

Jarel
2.0 out of 5 stars Gaming for children who are allergic to the outdoors and adults who behave like children
Reviewed in the United States on January 31, 2020
Platform: Xbox OneEdition: StandardVerified Purchase
I gave this game one star for great graphics and another for it's cool fatalities/brutalities. Once you get beyond that, this game SUCKS!

1. This game is in no way intended to encompass the casual gamer. You either devote an exorbitant amount of time to this game or prepare to get DEVESTATED by man-children who occupy 3/4 of the 500 sq/ft of their mothers basement. Better yet they're munching on doritos and drinking mountain dew while talking smack over the headset they asked Santa for on their 35th birthday.

2. If attempting to train off-line on the hard mode, be prepared for the computer to somehow know every move you're going to make before you make it. Not sure how that's possible but it sure enough does! So basically you're again dominated unless you're willing to devote 8+ hrs of gameplay to this one game daily.

3. The controls on this game are TERRIBLE! Try pulling off one of your "special moves" without caressing the keys in just the right way and you can forget about it! I lost COUNTLESS matches not because I didn't know when and how to utilize a move but simply because my thumb didn't mash a button just ever so gently and to the left a little more. Ridiculous!

4. This isnt the complete version of the game! After you buy this game you'll continue to be nickel and dimed for 'upgrades' and 'additional characters.'

Basically if you have a full-time job and really ANY other responsibilities in your life you're never going to have much success or fun with this game. However, if you're a child or adult who behaves like a petulant child this games likely right up your alley.

Chris S.
3.0 out of 5 stars Finish.. who?
Reviewed in the United States on July 19, 2019
Platform: Xbox OneEdition: StandardVerified Purchase
I am very picky when it comes to video games, I feel that paying $60 I should enjoy the experience and for the most part I did enjoy this game, let's go over my likes and dislikes.

Dislike - I know most people do not purchase a Mortal Kombat game for the story lines, but I do. There has always been a "story" to the MK games, but this one, is just nonsense, its a convoluted mess. Usually when you start playing around with time travel, everything can become a mess, quickly.

Dislike - Facial animations were atrocious, half the time during cutscenes only one side of the characters mouths would move, kind of making it look like they were always trying to tell you a secret.

Like - The combat, like with most games is fluid and both easy and difficult at the same time. Its easy to pick up and play and its easy to get your butt handed to you as well.

Like - The overall graphics are very good, minus the facial animations at times. The characters move smoothly, and have some very fluid body animations.

Overall the game is ok, just not as good as I would have liked it to be. The previous titles held such a higher replay value than this one, so it is lacking that little something that keeps me hooked.
Read more
11 people found this helpful
Helpful
Comment Report abuse

Jude
5.0 out of 5 stars If you like MK this is the one to get!!!
Reviewed in the United States on April 24, 2019
Platform: Xbox OneEdition: StandardVerified Purchase
Best Mortal Kombat since MK3, possibly the best ever!!!
Read more
15 people found this helpful
Helpful
Comment Report abuse

Kindle Customer
5.0 out of 5 stars "Round one. FIGHT!"
Reviewed in the United States on May 2, 2019
Platform: Xbox OneEdition: StandardVerified Purchase
My son can't stop playing. He's totally addicted. Plus, the graphics are superb! Mortal Kombat has come so far since I was a kid.
Read more
13 people found this helpful
Helpful
Comment Report abuse
See all reviews

Alejandra
5.0 out of 5 stars Worth it!
Reviewed in Canada on December 10, 2019
Platform: Xbox OneEdition: StandardVerified Purchase
Bought this one for me and my hubby, not a good idea hahahaha many hours playing! game is very good, graphics amazing, too much blood for my likes tho 😨

Page 1 of 1 Start overPage 1 of 1
This shopping feature will continue to load items when the Enter key is pressed. In order to navigate out of this carousel please use your heading shortcut key to navigate to the next or previous heading.
Back
Next
Pages with related products. See and discover other items: Explore watch marvels for children, Explore Xbox One Games