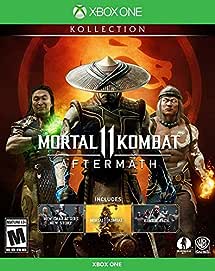 Issue with the Streamer or Content? Let us Know!

There is no streamer online now

Live video may contain mature content and is not intended for all audiences.
Video may also contain spoilers.

The Mk11: Aftermath Kollection contains Mortal Kombat 11, Kombat Pack and Mk11: aftermath. Purchase early and get Eternal Klash skin pack, Featuring MK9 Scorpion, MK: Deception Sub-Zero and Klassic Frost. In the original Mk11 cinematic story, you'll take on the role of earthrealm's protectors as a menacing new foe bends the forces of time, threatening to turn the tide and rewrite a dark history of their own making. Aftermath continue the critically acclaimed storyline in an all-new adventure, where fragile alliances are tested and the fate of two worlds hang in the balance. Now is the time to forge a new history.

4.7 out of 5 stars
4.7 out of 5
728 global ratings
How are ratings calculated?
To calculate the overall star rating and percentage breakdown by star, we don’t use a simple average. Instead, our system considers things like how recent a review is and if the reviewer bought the item on Amazon. It also analyzes reviews to verify trustworthiness.

Stormy
1.0 out of 5 stars no bueno
Reviewed in the United States on July 5, 2020
Platform: Xbox OneVerified Purchase
I really wanted to like this game, however, it takes up too much ram space. I had to delete other sgames just to play.😪
Read more
8 people found this helpful
Helpful
Report abuse

The Greatest
4.0 out of 5 stars Great Game With A Meh Story
Reviewed in the United States on July 17, 2020
Platform: Xbox OneVerified Purchase
I'm not an online Mk guy so I waited for the GOTY editions or whatever you want to call it. So I have no perspective on the online side of things.

Normally for this reason the story in MK games is a big draw for me. They're mostly kinda hokey but action packed. This one was kind of doomed from the start because the story is based on timelines and I don't know about you but I feel like every major franchise has a timeline based story. Avengers, Flash, Legends of Tomorrow, and MK11. Worse yet, the villain with the most "on the nose" name of all time "Kronika", looks EXACTLY like Tilda Swinton's Sorcerer Supreme in Doctor Strange. Right down to the gold plate thing on a bald head. She should have been dressed like a postal worker considering how mailed in her design and the overall plot was.

I think the revenant storyline from the past game painted them into a corner a bit and they had to go the timeline route to bring back the likeable versions of some deceased famous characters. I actually like that those normal versions of the characters are back but overall it would have been worth missing them in story mode and getting some old school skins to remember them by if we could have been spared yet another timeline plot. Changing the timeline has become the modern day quicksand in media.

That being said, this is an MK/Injustice style fighting game so you know there are gonna be lots of modes! MK11 doesn't disappoint and most of my fun has been had in the Towers and Towers of Time game modes and even the AI battles. Krypt mode is back as well (UGH).

Towers: Your standard MK experience from the original on up. Towers of different sizes culminating in a character based ending. The endings can be viewed ad nauseum in the Kollection area of the game.

Towers of Time: A series of varying towers usually involving modifiers of some kind. This is where I gather most of my Kurrency. Most towers offer skins, gear, augments, and modifyers as well as currency, souls and hearts which are all needed in mass quantities in Krypt mode.

AI Battle: You can modify the behavior of an AI based fighter and challenge teams of three for other characters. You set a team of defence characters that others can challenge. I have gotten ZERO challenges and it's not because I'm good. It may be a dead mode for most people since its been out for so long. You can earn skins and other things by winning these matches. They need to be played out but you can watch them at 2x or 4x speed. They will more times than not, do some sort of finisher.

Krypt: Krypt is a third person mode where you run around and open chests on Shang Tsung's island. There are some really cool places on the island and some puzzles as well as items you need to find to access certain areas. Kind of like a Zelda game if Shang Tsung swallowed it's soul. You will need SO MUCH currency, souls, and hearts to open some of the better chests. It is an enormous grind even if you have all the resources you would ever need just running all over the island. It is extremely tedious, seems random, and you could be grinding forever to get an item (for me these are Johnny Cage's MK2 skin and Jax's arms from MK3) they are only found in the krypt and I've opened nearly every chest at least twice so far (minus the ones that require hearts). I'm getting close to being done with the everyday grind and even if I got them both in my next two chests I'd hardly get to really use them. Oh well, just a bad ove to not let people have the option to buy specific things with money or large amounts of currency. I would trade 80% of what I've gotten so far for just those two things without hesitation.

Hearts: You get hearts from doing fatalities, murdering denizens of The Krypt, and by hitting points based goals in towers. You can also find them in chests. You need 250 to open one Shaq Kahn chest in The KRypt and 100 for each Scorpion Chest (as well as Scorpion's Spear to extinguish their flame based locking mechanism).

Souls: You get souls the same way you get hearts minus doing fatalities.

Fatalities: Gruesome as always. One thing i hate is any character that wears a helmet or face covering magically loses it if you perform a fatality. For a core part of the franchises popularity you'd think they would take the extra step of doing animations with the masks and helmets on. Maybe it became too difficult due to all the gear, but I'll tell ya I really don't like it. I'd rather things clipped through the gear than it disappear but that's just my, probably bad opinion.

Gameplay: Overall I've had a blast with the game despite my few gripes. Gameplay is tight, fun, and easy to learn. There are some nice tutorials specific to each character and the button layout is simplified so you only have two punches and kicks each with variations on each based on pressing a direction with the button. Fatalities, Friendships, and Brutalities are all easy to perform and fun to watch. The "bone breaker moves" are extremely violent and give you more gore than most fatalities from past games. They get boring after a little bit however and there is no option to skip through them even in 1P mode.

Buy/Rent/Skip? BUY, but if you want a better story mode go back to MKX for a quick visit. That one is dirt cheap with all DLC now.

rome maupin
1.0 out of 5 stars Series x plus this game = waste of money.
Reviewed in the United States on November 29, 2020
Platform: Xbox OneVerified Purchase
If you own a series x DO NOT BUY. Most of the DLC doesn’t work. All I got to work after installing and reinstalling was Fujin. Fighter pack 1 and other dlc downloads and disappears. They don’t show up in the game and even when it says downloaded their is nowhere to see it. Please don’t waste your money like I did. Hard pass.
Read more
5 people found this helpful
Helpful
Report abuse

Joseph
1.0 out of 5 stars Second discs doesn’t work, making the game unplayable.
Reviewed in the United States on August 7, 2020
Platform: Xbox OneVerified Purchase
First disc installed fine but the second “data disc” isn’t working. I can’t play the vast majority of the game, all I can do is local play. Unfortunately I can’t return it since I’m outside my return window... absolute trash. I guess that’s what I get for not installing it right when I got it.
Read more
4 people found this helpful
Helpful
Report abuse

Jacob Hunter
5.0 out of 5 stars Best Mortal Kombat by far
Reviewed in the United States on June 29, 2020
Platform: Xbox OneVerified Purchase
I loved the game the original story was the best definitely one of my favorite Mortal Kombat games yet. The aftermath reminds me a lot like how avengers endgame played out and how the animated DC Comics movies are right now. But I think that’s pretty cool. You kinda get everyone’s general idea of how they do it. And it’s pretty cool to me. Also the skin packs are awesome. Best money I’ve spent on a game in a long time. I would recommend this to anyone that is into these games
Read more
2 people found this helpful
Helpful
Report abuse

Jaimie & Brandon J.
4.0 out of 5 stars Had some issues with installing
Reviewed in the United States on January 18, 2021
Platform: Xbox OneVerified Purchase
We JUST got this in today, and had issues with the Kombat Pack not downloading correctly. It had to be uninstalled, and re-installed a total of 3 times to get it to properly download all of the other characters. It was a real pain, and wasted a LOT of time. If you run into this issue also, give it another try. We requested a replacement after the second time, and was able to cancel after the 3rd. Now that its working properly, there shouldn't be any issues. Husband is quite excited to play with the Spawn guy. I'm happy I get to read uninterrupted. Everybody wins. ;)
Read more
Helpful
Report abuse

oldschool
3.0 out of 5 stars Game is a mess
Reviewed in the United States on December 21, 2020
Platform: Xbox OneVerified Purchase
What a pain this game is to even be able to play it. After it installs and updates, you then have to go into the game details and download everything else separately. I had to download all of the extras, which is fine, but I also had to download the story and 4k story for another 40 some odd gbs. If they would've just put everything on disc, it'd be great, but if I need to google how to play story mode, there's a problem.
Read more
Helpful
Report abuse

D. Patton
5.0 out of 5 stars Birthday present
Reviewed in the United States on July 20, 2020
Platform: Xbox OneVerified Purchase
My 16 year old grandson requested this game for his birthday. He is very happy with it.
Read more
2 people found this helpful
Helpful
Report abuse
See all reviews