You've subscribed to The Secrets of Suburbia! We will preorder your items within 24 hours of when they become available. When new books are released, we'll charge your default payment method for the lowest price available during the pre-order period.
Update your device or payment method, cancel individual pre-orders or your subscription at
Your Memberships & Subscriptions
There was an error. We were unable to process your subscription due to an error. Please refresh and try again. 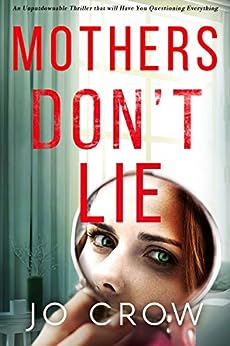 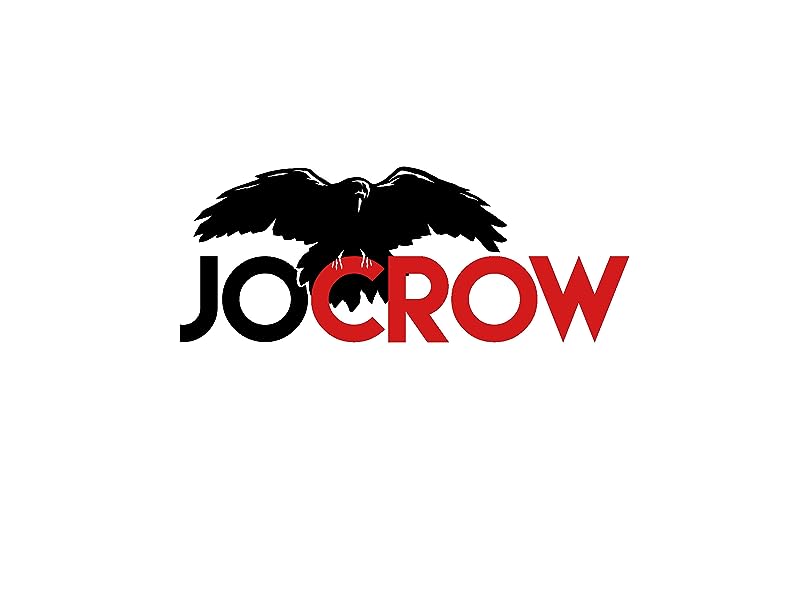 Mothers Don't Lie: An Unputdownable Thriller that will Have You Questioning Everything (The Secrets of Suburbia Book 7) Kindle Edition

by Jo Crow (Author) Format: Kindle Edition
Book 7 of 7: The Secrets of Suburbia
See all formats and editions
Sorry, there was a problem loading this page. Try again.
Read more Read less
Previous page
Next page

Nolyn: The Rise and Fall, Book 1
In the depths of an unforgiving jungle, a legend is about to be born. Listen now
Books In This Series (7 Books)
Complete Series 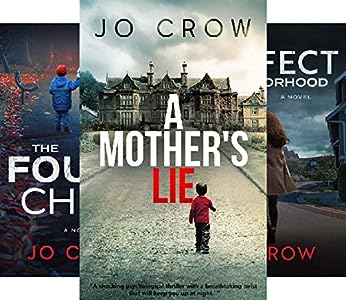 ★ ★ ★ ★ ★ "Extremely intense, emotional, and suspenseful. This book kept me hooked from beginning to end. Highly recommend!"

★ ★ ★ ★ ★ "This was an intense book with betrayal and secrets. It was a rollercoaster ride and kept me on the edge of my seat."

★ ★ ★ ★ ★ "This book was raw, sad, suspenseful, and intriguing. I kept myself up all night just to finish because this was an awesome page turner book!"

4.5 out of 5 stars
4.5 out of 5
156 global ratings
How are ratings calculated?
To calculate the overall star rating and percentage breakdown by star, we don’t use a simple average. Instead, our system considers things like how recent a review is and if the reviewer bought the item on Amazon. It also analyzes reviews to verify trustworthiness.
Top reviews

Anita L. Ballester-Carbah
3.0 out of 5 stars A Mediocre Read
Reviewed in the United States on March 4, 2021
Verified Purchase
Mediocre
Although the author bases her books in the US, her writing is so full of British/European phrases that it is distracting and feels less authentic. It's also loaded with grammatical errors, which is also distracting. The plot was predictable and not quite as believable as I would have liked. As a retired teacher of reading and language arts, I highly recommend stronger word choice, both in the descriptions of the books, as well as the body content. "Riveting" would have garnered more of a draw the "unputdownable." "Unputdownable" is a bit cringy. The author's bio needs work, too. There is absolutely zero information in her bio that makes her personable and real to her readers.
Read more
3 people found this helpful
Helpful
Report abuse

Cheryl
5.0 out of 5 stars Jo keeps you on your toes
Reviewed in the United States on November 25, 2020
Verified Purchase
Great storyline and plot. You can imagine the characters and the feelings they all set off towards one another throughout the book
Read more
3 people found this helpful
Helpful
Report abuse

Debra Nance
5.0 out of 5 stars Suspense the whole way
Reviewed in the United States on February 22, 2021
Verified Purchase
When I started this book, I did not want to put it down. Something always to keep you right there. The ending .....well, you will just have to read. WOW!!
Read more
2 people found this helpful
Helpful
Report abuse

Jean V.
5.0 out of 5 stars A superb story
Reviewed in the United States on March 27, 2021
Verified Purchase
It's 5 am and I just finished reading this book. I couldn't put it down. The twists and turns kept me turning pages. The surprise near the end i never saw coming. I have found a new author to follow..
Read more
One person found this helpful
Helpful
Report abuse

Rambo. This kept me guessing to the very end. I didn't see it coming. This book is fantastic!!
5.0 out of 5 stars Karma
Reviewed in the United States on June 23, 2021
Verified Purchase
What I enjoyed the most about this book was that karma was appropriately served. The chawere well developed. I highly recommend this book.
Read more
One person found this helpful
Helpful
Report abuse

Cheryl L Ramirez
4.0 out of 5 stars Suspense filled
Reviewed in the United States on December 29, 2020
Verified Purchase
Good suspense builder. Early on you know she is being messed with but figuring out who and why is the hard part.
Read more
2 people found this helpful
Helpful
Report abuse

Amazon Customer
5.0 out of 5 stars GREAT
Reviewed in the United States on May 9, 2021
Verified Purchase
Couldn't put this down
Read more
Helpful
Report abuse

Mary
3.0 out of 5 stars Before you go..
Reviewed in the United States on May 11, 2021
Verified Purchase
Easy afternoon read. Good read when your on the go. Nice twist of the story. Definitely is worth the read.
Read more
Helpful
Report abuse
See all reviews

Cath McTernan
5.0 out of 5 stars Even White Lies Can Grow Out of Control
Reviewed in the United Kingdom on February 14, 2021
Verified Purchase
This is book seven of the Secrets of Suburbia and the main character is Molly Burke, mother of a young son called Colin and married for the last few years to a man called Bryan who she met when she was struggling with her health and her young child. She also has a good job as an estate agent in the local area. They get the news that Bryan’s request to adopt her son has finally come through and she wants to celebrate, just the three of them, but he invites his parents, Frank and Kathy, who she doesn’t get on well with. It makes for yet another uncomfortable evening as Kathy seems to tut at her every action around her son and husband, whilst Frank never even speaks to her. Bryan had a difficult relationship with his parents, his father in particular, and had stayed away from them for years, until recently when he tried to rebuild their relationship. Molly had a difficult childhood in foster care, with abusive foster parents and a medical issue that left her suffering from a borderline personality disorder, which caused her to become a compulsive liar to cope with what had happened to her. With medication, a therapist and Bryan’s help, she finally managed to cope with her condition and function nearly normally.

She still can’t stop telling little lies and after her son goes missing whilst under his grandparents care, being found hours later with a head injury and his grandfather missing, after he had taken them on a hike. She almost attacks Kathy for taking her four year old son on a hike in the woods and has to call the police when he has been missing for hours. When they get Colin back from hospital, he avoids Molly all the time, only wanting comfort from Bryan. Colin’s hours of being missing, brings back painful memories from Molly’s past and cause her to start spiralling out of control. Kathy moves in with them while her husband is missing and this adds more pressure to Molly’s life. Neither she nor Bryan go to work for a few weeks as they try to get over the attack on their son and his father’s disappearance. Molly starts acting strangely and missing days at work, forgetting conversations or texts she is supposed to have sent. Bryan questions whether she is on her meds or not, or if she has even picked up her new prescription, but her behaviour and forgetfulness just seems to get worse.

She tells Bryan she is going to work, only to call in sick and book a spa day, only to see her mother in law getting out of a car, driven by a man who looks like Frank. A new customer who insists on only her showing her around some properties, then asking to be shown an apartment in a place with tragic memories for Molly and then turns up working with her husband. She also looks a lot like someone from Molly’s past that she hasn’t even told her husband about. She tries to call on her old friend and foster sister to help her figure things out, but since she only seems to call on her when she herself is in need, and her spiralling out of control is more than her foster sister may want to handle yet again, she has no one that will believe her. Someone knows what she did in her past and she believes they are after her again and want to take her son away from her. Her paranoia increases as deceit and lies surround her, until she is overwhelmed and struggling to figure out what is really true and what her illness may be making her hallucinate. While some lies may be revealed, other lies are left for you to ponder on, as the ending gives you a suggestion of another twist in the tale! Another fascinating book from the author that leaves the main character in a seemingly perfect life, only to have it fall down around her feet, as cracks appear in their life and in those around them. I received an ARC copy of this book from BookSprout and I have freely given my own opinion of the book above.
Read more
Report abuse
See all reviews