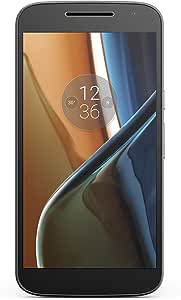 Visit the Motorola Store
4.3 out of 5 stars 826 ratings
Available from these sellers.


FREQUENCIES : COMPATIBLE TO USE WITH NETWORK SIM CARDS THAT WORKS ON

IMPORTANT : PLEASE CHECK WITH YOUR NETWORK PROVIDER THE COMPATIBILITY BEFORE YOU BUY.

Note : The standard handset package does not include a Handsfree. This is the manufacturer's standard package.

4.3 out of 5 stars
4.3 out of 5
826 global ratings
How are ratings calculated?
To calculate the overall star rating and percentage breakdown by star, we don’t use a simple average. Instead, our system considers things like how recent a review is and if the reviewer bought the item on Amazon. It also analyzes reviews to verify trustworthiness.
Top reviews

Brandon
5.0 out of 5 stars Price To Performance Ratio Is Out Of This World
Reviewed in the United Kingdom on January 6, 2017
Verified Purchase
Moto G4 Review

So I’ve upgraded to this phone from the Moto G (1st Gen) and I bought that when it first came out, that was 3 years ago I do believe, and back when i got that a paid £150, I was so amazed at the quality and pure power of the phone for the price i just had to get this one, and I will say now, i am very impressed by it, I will do a Spec Comparison of the two phones near the end and you will see how much difference in power there is between the two at the same price.

Now that’s been said i want to address the pricing on Amazon and what they’re doing with the listing of the phone. Firstly the Ram, I have no idea what this is all about, it said in the product description ‘Note: This model only comes with 1GB ram’ Which by the way is very bad in comparison to the rest of the specs, and i ordered mine with this note, when i got it i instantly checked in the settings for the specs and it says clearly 2GB of ram, so i don’t know what’s going on there, now though i’ve noticed they have ‘(2GB RAM)’ in the title so it should in theory it should be fine now, the other problem with the listing on here is the price, it went on offer for £130 i believe it was, but, it was out of stock, I got mine on warehouse deals (For £120) because i wasn’t willing to wait, and i made the right choice, because it came back in stock at the same time the offer came off, which is really unfair for the people wanting to buy the phone, it was either bad timing or a dodgy business practice.

Before i get into my comparison of this phone and the Moto G 1st Gen I want to say my sisters phone is the Samsung Galaxy S6 and that cost her £500ish, this phone has almost the same specs for a fraction of the price. It honestly is really worth the price and i’m just as blown away by it as i was with the 1st generation.

Screen Size - This phone is 5.5Inch, while the 1st gen is 4.5Inch. Huge difference there.

Battery - To accommodate all the extra power the G4 has there is an 3000MaH battery from a 2070MaH on the 1st Gen.

So both the phone were £150 at launch and the difference just blows me away, and it truly is amazing what Motorola are doing here, making flagship phones more affordable to the mainstream audiences and those that don’t have deep pockets like myself. I know alot of people may not get what all the specs mean, i tried to keep it as simple and barebones as possible for all who read.

CONCLUSION -
Amazing affordable phone which i highly recommend, you just can’t go wrong for the price to performance ratio

Tony
5.0 out of 5 stars Probably the weakest bit is the camera but it's fine to take reasonably decent snaps in reasonably good light
Reviewed in the United Kingdom on July 13, 2017
Verified Purchase
Had this phone quite some time now. It's not got the biggest this or the fastest that or probably any bragging rights in any department.

BUT in my opinion what it has got is a combination that all comes together really well and leaves you with a solid budget smartphone that you can rely on. Probably the weakest bit is the camera but it's fine to take reasonably decent snaps in reasonably good light. I use my camera a fair bit and it's very rare that I can't get a decent snap at least.

I love the fact that it's almost stock Android with just a few (mostly useful) features added by Motorola.

Practical, useful, straight forward, reliable. Some of my favourite words, and they all apply!
Read more
3 people found this helpful
Report abuse

Moto has proprietary software that lets you shrink the screen with a thumb swipe to allow you to work single-handed (like a small phone inside a bigger phone). Other Moto stuff allows you gesture commands, like turning on the camera or the torch by twisting or chopping the phone.

Apart from these few Moto helpful things, it is Vanilla Android (upgraded to N) which lets you split the screen, so it is just as well that it is quite a big item: 13.97cm (5.5") Full HD display, but the plastic snap-on back provides a good matte grip. The cameras are very good - 13 MP rear, & 5 MP front. Flash to the rear. 2GB RAM and 16GB memory. They say that you can add up to 128 GB through a microSD card - I use a 64GB Card, but not all apps like that idea, and it can still fill up the phone.

The Card is really only for things like music files, films or photos. It has OTG so if you get a tail you can connect a USB pen drive and work that way instead of the SD Card method. 16GB is not big enough for a lot of popular apps, and this is a bigger downside than I imagined.

It has a 3000 mAh battery that really does last longer than most phones. Charging is quicker when turned off/ aeroplane mode, but it's not too bad at charging reasonably fast. It has Gorilla Glass and is not as waterproof as the previous model (a big disappointment to me).

Another big disappointment is that the Moto G4 does not have a magnetometer and won't support a compass app. It uses GPS for Map apps, but it doesn't know which way you're facing, so you often get route recalculations when it realises you're off down the wrong way. Happens while driving, but almost always happens when you are walking about using the maps.

Our old Motos had stereo speakers that were the best I'd heard on any phone, but this has a single loudspeaker and is not great anymore :(

As we usually buy two of everything - one for my wife and one for me, I was amazed to find that just because she bought a white one, she got TWO SIM capability, and I only got ONE SIM because it is black?! The price was identical. It seems that you have to be careful and read the spec because MOTO have more model differences than you would expect from their simple model naming system. TAKE CARE!

[Edit - more recently it has started going a bit wonky - activating apps and generally being unusable having a mind of its own. This was exactly One Year from purchase) I have had to factory reset. I am hoping for the best. The G5 still doesn't have a compass and now it is even less waterproof and doesn't have Gorilla Glass.. so if I have to get a new phone, it doesn't look like it will be another Moto - what a shame as I have bought 5 Motos to-date]
Read more
One person found this helpful
Report abuse

Tina T-bag
1.0 out of 5 stars Not all it's cracked up to be!
Reviewed in the United Kingdom on January 3, 2018
Verified Purchase
Very reasonable phone for the money and was very happy at first. But only 12 MONTHS later, the battery is rubbish (will drain after 2-3hrs browsing/emailing/messaging on net) and i'm constantly emptying the cache, recycling apps on what I had presumed was a big enough memory size (16gb) for a medium user as myself. My previous Motorola with less memory lasted almost 3 years. Now I'm looking at other brands for my next phone. Shame.
Read more
2 people found this helpful
Report abuse
See all reviews
Pages with related products. See and discover other items: motorola android phone, motorola moto z, motorola smartphones, motorola android products, moto smartphone, phone motorola