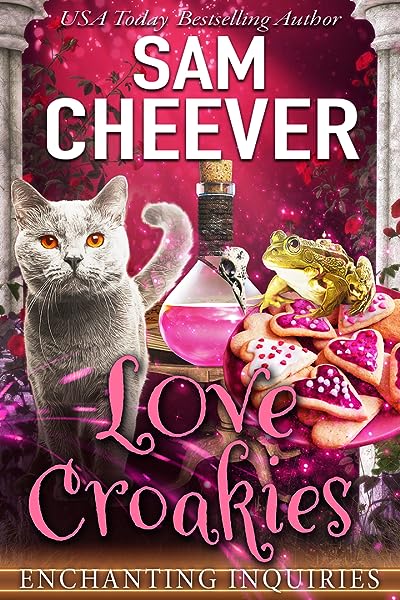 Start reading Mourning Commute on your Kindle in under a minute.

No Genre Left Behind
5.0 out of 5 stars Mourning Commute
Reviewed in the United States on January 19, 2019
Verified Purchase
Another solid cozy mystery in the Funeral Fakers series. Mourning Commute is a stand-alone mystery that I had a hard time guessing exactly who-dun-it and why. Sam Cheever laid the clues out beautifully without giving too much away until the case was solved.

The characters may have been a little over the top, but they were more lovable because of it. Our funeral faker, May Ferth, really pulled out all the stops to make sure her grieving clients got what they needed - including a little shoulder to cry on and an ear willing to listen.

There's a touch of romantic possibility between the P.I. investigating and May that I really enjoyed. They both had moments of quick thinking and worked well as a team to solve the case and catch the bad guys. The cases in the Funeral Fakers have all been quite involved and intricate, and I'm impressed at the authors' abilities to fit so much into a novella and bring all the pieces together in a very satisfying conclusion.

**I voluntarily reviewed a complimentary copy of this book**

Sheila Deeth
VINE VOICE
4.0 out of 5 stars humorously over-the-top
Reviewed in the United States on March 28, 2019
Verified Purchase
Protagonist and narrator May Ferth describes herself as “thirty-three ears old, attractive, …[with] a certain kind of charm… if biting humor and self-deprecating wit could be called charming.” She’s a professional mourner—a task that involves being paid to fake-mourn the dead, say, when a realistic girl-friend is required. But sometimes fake-mourning turns into real-investigating when mysteries abound around the death,. Soon this daughter and sister of cops is treading on familial toes as she uses her acting talents in trying to uncover a deathly plot.

Blending humor, pathos, mystery and even scares, Mourning Commute is a cozy mystery with bite, starring a protagonist whose follies and romances match her stubborn curiosity, and a collection of humorously over-the-top friends and family. It’s a fun read, and a nice introduction to the series—book two, but it really stands alone.

Disclosure: I got it on a deal.
Read more
Helpful
Comment Report abuse

Kindle Customer Guzzialfa
VINE VOICE
3.0 out of 5 stars Decent Story Line with Believable Characters
Reviewed in the United States on July 21, 2020
Verified Purchase
Book Two in the Funeral Fakers Series of Cozy Mysteries - the self proclaimed 'good clean fun cozy mysteries,' there are no active characters in the first book to book two, this one. The only connection is the name of the agency the 'Fakers' work and their owner, Ruthie. For all intents and purposes this could then be considered a stand alone story with no real need to read the first or third in the series of you are a fan of Sam Cheever, the author. If course, the genre itself is the connecting factor so indeed read the first in the series. It is the better of the two so far. Storyline is mostly believable but somewhat incongruous with the prevalence other than it takes place in and around the city of Asheville in North Carolina.
Read more
Helpful
Comment Report abuse

BananaMcGee
5.0 out of 5 stars Cute, Clean, Cozy!
Reviewed in the United States on May 26, 2019
Verified Purchase
This is the first book I’ve read by this author and it definitely will not be the last! I truly enjoyed this story. It was fun and well done and everything a cozy mystery should be.
There was an attraction without the heavy romance mush, and I liked that. There were no gory descriptions of violence and no profanity.
This is a stand alone novel, which gives a complete ending, not requiring the purchase of the next book. A series is nice, but each book should have a complete ending, and this one does.
The characters were likable and well developed.
I look forward to reading the rest of the series and others by this author.
Read more
One person found this helpful
Helpful
Comment Report abuse

Jacqueline Fleming
5.0 out of 5 stars Review
Reviewed in the United States on January 17, 2020
Verified Purchase
MayBell Ferth or May is a professional mourner for Exit Stage Left. During one of her assignments, she takes a personal interest in a viewer, the deceased's best friend Eddie Deitz. He is immediately suspicions of May. The facts of his friend's car accident are questionable and against her family's advice May dives into the mystery. With Deitz.
Mourning Commute is the second in this series. It is a stand alone cozy mystery. It is fun and suspenseful. It kept my interest the entire time. My only complaint is that I thought it would continue with the same characters as the first in the series. It does not.
Read more
Helpful
Comment Report abuse

Monam
5.0 out of 5 stars Witty and clever
Reviewed in the United States on March 27, 2019
Verified Purchase
First book I've read from this author and another great Funeral Fakers story. May is so witty and she has a wonderful loving family. I liked that she worked with Eddie instead of trying to handle it all on her own. Lots of suspense, lots of suspects, and the big question, are the two murders linked? I was hooked to find the answer.
Read more
Helpful
Comment Report abuse

Sandart
4.0 out of 5 stars Fake funeral mourner mystery
Reviewed in the United States on April 10, 2019
Verified Purchase
MayBell is back on the job as a hired mourner at a funeral in this book two in a series. She gets involved investigating recent murders after overhearing something suspicious at the wake. Quirky characters and fun interaction s between them keep this cozy interesting.
Read more
Helpful
Comment Report abuse

Customer
5.0 out of 5 stars Death definitely becomes her
Reviewed in Canada on February 26, 2019
Verified Purchase
This was such a fun mystery, full of engaging characters with just enough twists and turns to keep me glued to the page. If you love cozy Mysteries this one is a must-read.
Read more
Report abuse
See all reviews