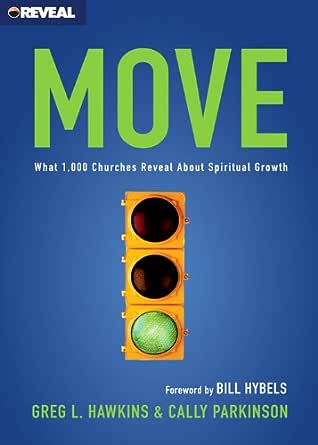 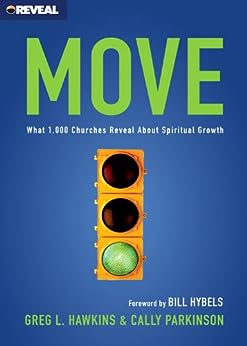 Greg L. Hawkins is executive pastor of Willow Creek Community Church. He is also co-creator of REVEAL, an initiative that utilizes research tools and discoveries to help churches better understand spiritual growth in their congregations. Greg and his wife, Lynn, live in the Chicago suburbs with their three children.

Cally Parkinson is brand manager for REVEAL and previously served as the director of communication services at Willow Creek Community Church, a role she undertook following a twenty-five-year career at Allstate Insurance Company. Cally and her husband, Rich, live in the Chicago suburbs and have two grown children. --This text refers to the paperback edition.

John Gibbs
5.0 out of 5 stars How to enhance ministry effectiveness
Reviewed in the United States on July 26, 2011
Verified Purchase
It may be impossible for us to tell the secrets of people's hearts, but it really is possible to know whether the people in church congregations are truly growing more in love with God and extending that love to other people, according to Greg Hawkins and Cally Parkinson in this book. The book describes findings from surveys which probe much more deeply than the typical "number of attenders", "number of baptisms", and "number of participants in small groups" figures which are traditionally used to gauge the health of churches.

The "Reveal" surveys used by the authors measure the state of respondents' spiritual growth by asking questions relating to spiritual beliefs, attitudes, motivations, behaviours and satisfaction. Based on their responses, the respondents from each church can be divided into four groups: Exploring Christ, Growing in Christ, Close to Christ, and Christ-Centred. Some 250,000 people from more than 1,000 churches have taken the survey, and the results allow the authors to draw some interesting inferences about the catalysts which move people in their spiritual journeys from one group to the next, and about barriers to growth and how to overcome them, and about what steps church leaders can take to help the spiritual growth process.

* Get people moving, by having a clear pathway for people on their spiritual journeys.
* Embed the Bible in everything the church does.
* Create ownership by inspiring people to adopt the vision of the church as part of their identity.
* Pastor the local community by taking responsibility for addressing local community needs.

Interestingly, the churches with the best results in the surveys ranged in size from small to very large. Some were predominantly white, some predominantly African-American, and some were multicultural. Very few of the pastors of those churches are famous, and most seemed surprised to discover that their churches ranked well above the average for spiritual growth.

PK
5.0 out of 5 stars Excellent for lay people in leadership roles
Reviewed in the United States on November 21, 2014
Verified Purchase
Two thoughts:

Surveys are difficult. Imagine surveying over 250,000 congregants. If you ask each respondent four questions you have in excess of 1,000,000 data points to roll up and explain. The authors do a really effective job with Move. If you work in high tech (sorry, I’m not as familiar with other industries), imagine a very compact, very linear, director to executive PowerPoint presentation. Now, add in just enough words to articulate the bullet points and you get this book.

Honesty is difficult. Imagine you roll up a large amount of survey data and the results don’t align with the core assumptions of your company, or perhaps even your industry. There is a great temptation to massage the messaging before bubbling it up the management chain.

On the very first page of the book's Foreword, the Church Founder and Senior Pastor states: “What they [the authors] discovered challenged some of our core assumptions about our effectiveness as a church.”
Read more
One person found this helpful
Helpful
Comment Report abuse

Steve K
5.0 out of 5 stars Putting numbers to the Truths we'd like to ignore
Reviewed in the United States on December 31, 2012
Verified Purchase
The principles outlined in this book bring to light a lot of the things that church leaders would like to ignore. If you and the rest of your church aren't moving toward a Christ-centered life, there's something wrong, and this book may help you overcome what you'd prefer to overlook. This is an excellent tool if used wisely. The authors are very careful to ground its principles in biblical truth, and I recommend you ground your church family in the Bible first and foremost. The catalysts outlined in these pages will help your congregation grow in Christ. I would recommend you use the information in this book as guidance to improve on your own church's discipleship milestones. Don't hammer your congregants with the spiritual continuum chart. Instead, challenge your congregants to get involved in the various catalysts that they need to move from one step to the next. A good teacher doesn't read the textbook verbatim, but becomes a living example of how to it should be done. I'd call this a must-read for church leaders, but don't let the graphs go to your head. Don't start church comparisons unless you're teaching from the seven churches in Revelation.
Read more
One person found this helpful
Helpful
Comment Report abuse
See all reviews

HF
5.0 out of 5 stars Good book
Reviewed in the United Kingdom on February 18, 2014
Verified Purchase
For any involved in church leadership this is an insightful and revealing book. Full of helpful research done across many different churches and congregations, its conclusions will assist those who are passionate about seeing those in their churches move closer to Jesus.
Read more
Report abuse

Peter Sutcliffe
5.0 out of 5 stars Excellent
Reviewed in the United Kingdom on October 1, 2013
Verified Purchase
"Move" is a very informative and useful resource for any pastoral team looking for definition in their church organisation structural processes.
Read more
Report abuse

Robert Brennan
2.0 out of 5 stars stunningly great book marred by illegible charts
Reviewed in Australia on April 17, 2014
Verified Purchase
This should be a five star review. Why? Because every church leader should read this. The REVEAL research across 1000 churches is solid and tells a consistent tale of where people are spiritually within congregations. I would love to see the results of the next round of research in a few years time which needs to be done to see if the recommendations for getting people to move on in spiritual growth actually work. Or which ones do. Having said that there are a number of factors for bring about change and growth in people's spiritual walk which do clearly work.

The major criticism and this is MAJOR! Is that all the research is summarized throughout the book in charts. I remember looking at them in the hard copy edition and thinking the lettering style surrounded with a fluorescent glow worked nicely on glossy paper. On both of my kindle devices color and e-ink every single chart WAS TOTALLY AND PAINFULLY ILLEGIBLE. All of the text looked badly out of focus. This would not have been as big a problem if the chart detail were always summarized I the plain text of the book, but it often isn't.

Andrew Smith
4.0 out of 5 stars A Review of "Move"
Reviewed in Canada on July 29, 2013
Verified Purchase
I havent completed reading the book, but so far the information has been informative, encourging and insightful. The material is presented in a logical and concise manner which promote retention and ease of understanding.
I would definitely recommend the book to pastors and church leaders who have a burning desire to see their church mobilize as an army for the advancement of the kingdom God.
Read more
One person found this helpful
Report abuse
See all reviews