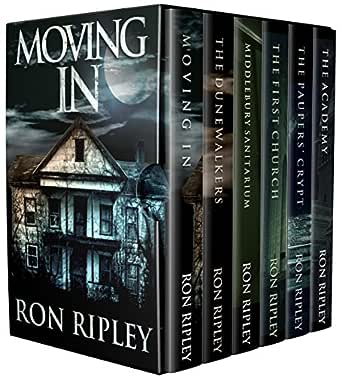 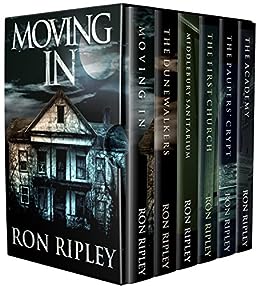 "Very terrifying and haunting...Make sure you get the 'Iron And Salt'" -Robin L.

"I totally enjoyed this story, a one-sitting riveting read. Mr. Ripley has a special talent for approaching the supernatural!" - Mallory Heart Reviews

"Breathtaking adventure. I simply couldn't put this down 'til the end. I adore all the books but this one will leave me up all night. Living on a farm surely isn't helping tonight." - Reader

"Mr. Ripley is a master at the art of keeping your heart pounding & you reading as fast as your eyes can fly over the words. 'Moving In' has a great story line & realistic characters that leave you wanting for more. If I ever buy an older home, I'll be thoroughly checking the basement first!" -Sharon

"Moving In is one very fast-paced, spooky tale with never a dull moment! The characters are well-drawn.  A spooky, exciting tale!" -Victoria S.

"You'll sit on the edge of your seat the whole way wondering how they will get out of this mess! Well worth the read for fans of scary books!" -Kim

"While it is a haunted house story, it is refreshingly new. It is not just a run of the mill haunted house story. "Moving In" is different. The story line is new. The characters are original. For me, it very quickly became a real page turner. I couldn't put down!" -David D.

"Easy, simple pace and well-defined situations. Of course there was creepiness, lots of creepiness. If you're looking for simple horror, this will do it!" - Maureen

"Don't read this late at night when things are quiet. It might make you jump when unheard things go bump in the night! Fun read!" - Kathy

"What a fantastic scary story!! Paul the ghost kind of freaked me out so I had to stop reading for the night." - Alley D.