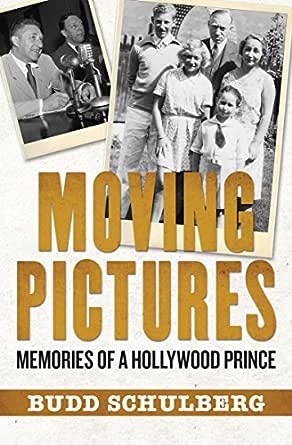 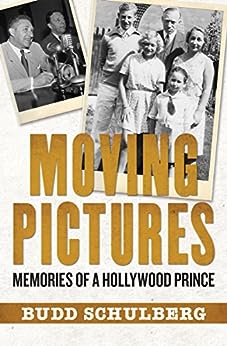 “Although Moving Pictures reads like a novel, I found myself saying, ‘Yes, this is exactly how it was. . . . Now I know it from the inside!’” —Elia Kazan
“Unquestionably the authentic history of the creators of the motion picture—a fascinating book.” —Myrna Loy

Budd Schulberg (1914–2009) was a screenwriter, novelist, and journalist who is best remembered for the classic novels What Makes Sammy Run?, The Harder They Fall,and the story On the Waterfront, which he adapted as a novel, play, and an Academy Award–winning film script. Born in New York City, Schulberg grew up in Hollywood, where his father, B. P. Schulberg, was head of production at Paramount, among other studios. Throughout his career, Schulberg worked as a journalist and essayist, often writing about boxing, a lifelong passion. Many of his writings on the sport are collected in Sparring with Hemingway (1995). Other highlights from Schulberg’s nonfiction career include Moving Pictures (1981), an account of his upbringing in Hollywood, and Writers in America (1973), a glimpse of some of the famous novelists he met early in his career. He died in 2009.

Mr. Schulberg was raised in the Hollywood of the 1920s as the privileged son of a pioneer studio mogul. As a book on the early days of the movies in Hollywood--their triumphs and fiascos, their scoundrels and heroes--his candid memoir is hard to beat. "A fascinating and significant contribution to American social history."--Arthur Schlesinger, Jr. --This text refers to an out of print or unavailable edition of this title.
Read more

tleeminnieme
5.0 out of 5 stars From soup to nuts !
Reviewed in the United States on February 15, 2014
Verified Purchase
What a great read! Between his father and then himself, Budd Schulberg has had a rare intimate insiders view of Hollywood from day one.
From his father , B.P., we get the early days of nickelodeons and the "movie" scene in New York. The birth of this form of entertainment is so well told by Schulberg. One particularly funny take- a fireman in Chicago decided to put a railway car on "rockers" so he could make the whole car shake and move as people watched "The Great Train Robbery". People would actually flee screaming from the rail car/theater !

So many great stories of how the industry was born.

Also a fascinating study in how an industry forms, coalesces , consolidates. When movies were new, there were no job descriptions, corporations, areas of responsibility. It was all being made up on the fly. And by the 1930's had congealed into the studio system.

What a great read . Filled with descriptions of early 20th century Hollywood - when Wiltshire blvd was all dirt and mud !

Antique Doll
4.0 out of 5 stars The Golden Years of Movie Making
Reviewed in the United States on February 28, 2015
Verified Purchase
If you are expecting a book with a lot of conversation in it, this is not it. If you are wanting a book with a lot information about the early years of Film Making this is it! The author's focus is on his life growing up in those early years of Hollywood. I enjoyed the book. Budd Schulberg gives a good insight into his father's life as Producer of Paramount Studios, running the Studio during the time of going from Silents to Talkies. Loved reading about some of the activities of the actors and actress 'back in the day' when not filming.
Read more
3 people found this helpful
Helpful
Comment Report abuse

Kindle Customer
5.0 out of 5 stars Fabulous read and so well written
Reviewed in the United States on June 7, 2017
Verified Purchase
What a delightful book. An in depth history of early film making, the Hollywood moguls and spicey tidbits about various movie personalities from Gary Cooper, Clara Bow to Adolph Zukor and L B Mayer. Also very funny stories from the author's life as a boy growing up within the studio system and knowing all the players. My favorite was the ripe fig throwing episodes at such stars as John Gilbert and Greta Garbo with his friend, Maurice Rapf. Both his parents were amazing characters and brilliant people. Very entertaining book.
Read more
Helpful
Comment Report abuse

Jimmy
5.0 out of 5 stars An extraordinary memoir about the earliest days of the movie industry
Reviewed in the United States on November 14, 2012
Verified Purchase
Budd Schulberg is not only a keen observer but also a wonderfully talented writer. His memoir about growing up in the movie industry -- from its very earliest days under the tyranny of the Edison patent agents, is a great read for anyone interested in cinema history and the studio system. Highly highly recommended by this old undergraduate film major! My only complaint -- which has nothing to do with the book -- is after reading these fascinating first hand accounts of the stars and, in many cases, their silent pictures, trying to hunt down the films (on amazon and elsewhere) is near impossible!
Read more
6 people found this helpful
Helpful
Comment Report abuse

John W. Cooke
4.0 out of 5 stars A History of Early Hollywood and the Film Industry
Reviewed in the United States on April 3, 2018
Verified Purchase
While this is basically a memoir, Shulberg's story of his first 20 years constitutes an amazing account of the history of founding of the American film industry. You want to know what it felt like to be in Los Angeles in the 1920? Read this.
Read more
2 people found this helpful
Helpful
Comment Report abuse

K. Schonlau
5.0 out of 5 stars Trip Down Memory Lane
Reviewed in the United States on December 20, 2012
Verified Purchase
Budd Schulberg grew up in the movie business, the son of B.P. Schulberg, the noted producer. Budd knew Hollywood like only someone growing up in the industry could know Hollywood. This book is a feast for those who love Old Hollywood stars and the movies they made. It's all here from the silents in the teens to modern cinema. I enjoyed reading about how stars became famous, or fell from glory (a la Clara Bow) and the great movie conglomerates like MGM came together. If you love the old movies and stars, give yourself a treat and read this.
Read more
3 people found this helpful
Helpful
Comment Report abuse

J. D. Adams
5.0 out of 5 stars Great read for film buffs
Reviewed in the United States on March 15, 2020
Verified Purchase
Born into Hollywood royalty, Budd gives an inside view into the uncertain toddler steps of what would become a major industry. Engaging, and revealing.
Read more
One person found this helpful
Helpful
Comment Report abuse
See all reviews

Ms. G. M. Henshall
5.0 out of 5 stars Totally engrossing
Reviewed in the United Kingdom on July 21, 2009
Verified Purchase
Wonderfully well written highly readable account of growing up in the early days of Hollywood as the son of Paramount mogul B.P. Schulberg.Anyone interested in the history of cinema will find this book a delight to be savoured.Budd Schulberg famous son of famous father takes us on a journey through boardroom politics to bitter family break up along the way stopping to play in studio backlots and being flattered by famous stars anxious to keep in with Daddy.Never less than fascinating.
Read more
Report abuse

Mr. A. Braithwaite
5.0 out of 5 stars Five Stars
Reviewed in the United Kingdom on August 1, 2017
Verified Purchase
Thank you
Read more
Report abuse