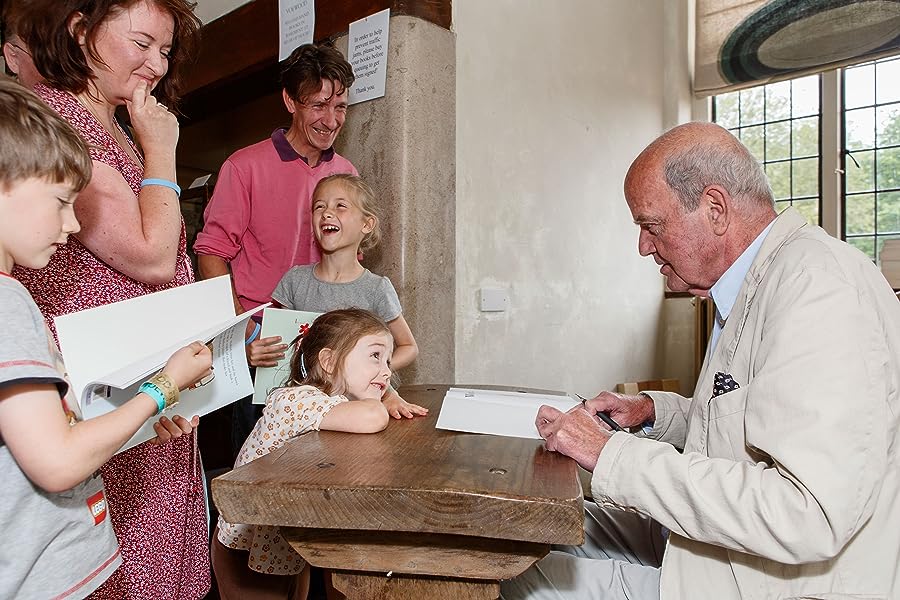 by John Burningham (Author)
4.8 out of 5 stars 311 ratings
See all formats and editions
Sorry, there was a problem loading this page. Try again.

Despite Mr. Gumpy's warnings to the multitudinous animals and children on his barge, the outing turns soggy when the boat capsizes. Ages 2-6.
Copyright 1990 Reed Business Information, Inc. --This text refers to the school edition.

“Mr. Gumpy's little scow becomes a miniature ark when he takes two children and one each of the various domestic animals for a ride. . . . The water appears so warmly inviting, and the tea they all share so satisfying, that the promise of the first glowing page is fulfilled. Burningham's sketchy yellow lines make the sun shine on his pages, and his animals--sometimes jaunty, more often appealingly hesitant--are his alone, unostentatiously distinctive. Mr. Gumpy has bumbling charm, and his outing is an unqualified pleasure.” ―Kirkus Reviews

“A real charmer of a picture book for the very young.” ―Booklist

“Mr. Grumpy's Outing is out of sight.” ―School Library Journal

--This text refers to the school edition.

John Burningham is a highly acclaimed author and illustrator with numerous books to his credit. With Mr. Gumpy's Outing, he became the first artist ever to win England's prestigious Kate Greenaway Medal twice. He lives in England.

--This text refers to the school edition.

Ages 2-5. The wonderful drawings from a 1970 classic translate well to this new board-book version. Mr. Grumpy is planning a boat trip down the river, and children and animals want to join him. He agrees to take each guest, as long as there's no hopping, chasing, mucking, teasing, trampling, and so on. Of course, once the children, the goat, the calf, the chickens, the sheep, the pig, the dog, the cat, and the rabbit are all aboard, mayhem breaks out, and the boat tips. But Mr. Grumpy rises above his name and takes everyone home for tea, with an invitation, "Come for a ride another day." In this format, the charming, sketchy illustrations still show great detail, and the text, with its entertaining, cumulative lists of animals, is printed in easy-to-follow, large brown type to win over a new set of preschoolers. Gillian Engberg
Copyright © American Library Association. All rights reserved --This text refers to the school edition.

One fine morning Mr. Gumpy decides it's a perfect day for an outing in his little boat. Apparently, plenty of others think so, too. First some children ask to join him, then a rabbit, a cat, a dog, a pig, a sheep... Soon, Mr. Gumpy's boat is precariously full, and there's nowhere for anyone else to go--but overboard! This mild mariner takes everything in stride, though, and his guests are soon bellying up to a nice tea.

John Burningham earned the Kate Greenaway Medal, an ALA Notable Children's Book award, and the Boston Globe-Horn Book Award for Mr. Gumpy's Outing, and it's no wonder. This gifted and highly original author-illustrator creates a vision of glorious summer with deeply textured, sometimes only suggested, drawings. His tentatively questioning animals are ready to step right out of the pages and quietly join the delighted reader. And the simple, repetitive dialogue will lull the listener as long as it takes the characters to reach the boat's maximum capacity. Even then, there's no big splash--just an understated, Burningham-esque "and into the water they fell." Young readers will never tire of this gentle, comforting storybook. (Ages 2 to 6) --Emilie Coulter --This text refers to the school edition.

4.8 out of 5 stars
4.8 out of 5
311 global ratings
How are ratings calculated?
To calculate the overall star rating and percentage breakdown by star, we don’t use a simple average. Instead, our system considers things like how recent a review is and if the reviewer bought the item on Amazon. It also analyzes reviews to verify trustworthiness.
Top reviews

Sunnyswimmer
5.0 out of 5 stars Charming and unique
Reviewed in the United States on February 4, 2010
Verified Purchase
I recently purchased this book - 36 years after my mother first read it to me as a toddler. I wasn't sure if my memory of it was just imagined or if it really was a lovely, fun, uniquely illustrated (yet simple) tale. The answer came from the reactions of both my son and me: He loved it and has asked me to read it repeatedly for a week. I love reading it and am charmed both by all the memory bells it rings, and also by the sweet new memories my son and I are building together while bonding over love of this book.
Read more
2 people found this helpful
Helpful
Report abuse

Nancy
5.0 out of 5 stars Mr. Grumpys Outing
Reviewed in the United States on May 25, 2021
Verified Purchase
Perfect book to read to my class.
Read more
Helpful
Report abuse

kit
5.0 out of 5 stars Such a great book with beautiful illustrations. My kids love it!
Reviewed in the United States on March 24, 2013
Verified Purchase
We borrowed this book from the library and my daughter adored it. Every time we had to return it she immediately noticed its absence and would ask for it again, so we finally just bought it. We were hoping to find the board book version, as my daughter can be a little rough on books. But this was the best price available, and we see it as a good opportunity to teach her how to care for and respect her books, since she loves this story so.
Read more
One person found this helpful
Helpful
Report abuse

Lisa Marie
4.0 out of 5 stars Because The Goat Kicked
Reviewed in the United States on May 23, 2011
Verified Purchase
Mr. Gumpy decides to take a ride on his boat on a nice summer day and he finds himself with some interesting company. Mr. Gumpy's Outing is full of unique illustrations that appear to be sketches with black and white on the left and color on the right. I read this story with my four year old and he seemed to enjoy it, but I did not find it particularly interesting. I did really like some of the vocabulary John Burningham used such as squabble, muck, bleating, and trample. These words are not commonly used so they allowed further discussion of the actions of animals. The end also showed how sometimes when things don't go as planned you can still have fun. When the boat tips over, they swim to the shore and go home for tea.
Read more
One person found this helpful
Helpful
Report abuse

drdirt
5.0 out of 5 stars Mr. Gumpy's Outing
Reviewed in the United States on October 20, 2009
Verified Purchase
This has been a favorite family book for 37 years. I first came across this book as a book read to my niece as a small child.

When my husband and I adopted our daughter, the book was given to her.

My nephew and his wife just had a son and I sent this book to them.

The children loved having the book read to them.

We we glad to send this book to the next generation.
Read more
Helpful
Report abuse

Mary Greene
5.0 out of 5 stars Fun tale of a man who gives animals and children a ride in his boat.
Reviewed in the United States on March 8, 2021
Verified Purchase
This is a really charming and fun book. My 23 month old granddaughter and our whole family loves it.
Read more
Helpful
Report abuse

Ronda
5.0 out of 5 stars Great book
Reviewed in the United States on September 11, 2020
Verified Purchase
Love this book! My kids loved it
Read more
One person found this helpful
Helpful
Report abuse
See all reviews

Katkin
5.0 out of 5 stars Mr Gumpy went down well.
Reviewed in the United Kingdom on March 3, 2019
Verified Purchase
I bought this book for my 6 year old granddaughter, it was on her school list of books to buy for her age group. I read it to her and she looked at me in a strange way and told me that it was Mr Gumpy NOT Mr Grumpy. I must get some new glasses!
Read more
3 people found this helpful
Report abuse

AG
5.0 out of 5 stars Beautiful
Reviewed in the United Kingdom on May 22, 2021
Verified Purchase
My 5 year old loves it. He loves the connection and repetition of the characters. The action/reaction. Clever book!
Read more
Report abuse

Skye
5.0 out of 5 stars A good story
Reviewed in the United Kingdom on October 24, 2013
Verified Purchase
It's a good story to read out loud. It's a simple story with ample space for the imagination of young minds. I bought it for my kids, they are only 16 months old but they love stories especially about animals. So they enjoy it when I read it out loud to them. The book is well written. The quality is good, although it is a paperback version, the paper quality is very good. This is a good read for kids.
Read more
One person found this helpful
Report abuse

Renny Gye
5.0 out of 5 stars Don’t rock the boat
Reviewed in the United Kingdom on March 19, 2019
Verified Purchase
Charming pictures and a great book to read out loud, complete with animal noises. A family favourite.
Read more
Report abuse
See all reviews