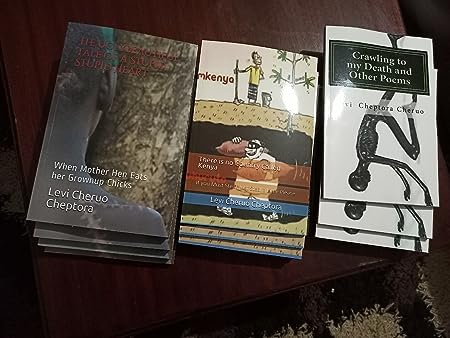 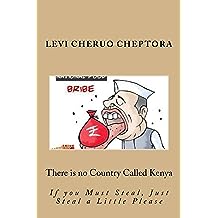 There is no Country Called Kenya: If You Must Steal, Just Steal a Little Please Mar 19, 2016
by Levi Cheruo
( 3 )
$2.00
The year is 2030. A mysterious, rogue, and notorious Committee X has hijacked Kenya, defiled The Kenya Constitution 2010, grabbed forests, parks, whole counties, legalize prostitution, is openly cultivating coca, poppies, and cannabis sativa, and has stolen every coin from Central Bank…inflation rates are skyrocketing, unemployment rates are off the roof, the Shilling value is nose-diving, teachers, nurses, doctors, security personnel among others are either on strike or on a go-slow.

An Enemy of the State (a Computer Wizard called JOHN with the help of agitated pro-status quo elements, diehard patriots, and JEFFRY, The American Ambassador to Kenya) is poisoning the masses via Twitter, Facebook, Instagram, WhatsApp etc. The masses are fast becoming informed, and are thus poised to unseat the puppet regime answerable to this mysterious Committee X, and inherently directly responsible for their woes.

Committee X holds a Crisis Meeting to deliberate on the way forward: they must eliminate their major threat or risk losing all they have worked for so hard. However, not every member of Committee X is keen on rooting out the main threat facing them…

The majority, hapless proletariats, are united in suffering, and empowered by information. The minority, all-powerful bourgeoisies, are too drunk with their loot yet armed with invincible financial muscles.

A war, not ever witnessed before in this part of the world, has just begun! Who will win? Will JOHN survive the ugly wrath unleashed by this well-organized army of children of the evil? Will Kenya be liberated? Will Kenyans sing a new song of freedom after 66 years of enslavement by fellow Africans?
Read more
Other Formats: Paperback 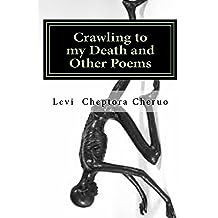 Crawling to my Death and Other Poems: A Poetry Anthology Jun 6, 2016
by Levi Cheruo
( 1 )
$2.00
When dispirited for one reason or the other, poetry can be an ideal solace…a perfect source of comfort that can ignite your heart, light a smile on your sad face, uplift your soul, and bring tears of joys in your eyes.
Through poetry, we make known our innermost desires, fears, hopes, fantasies and at times, our skewed and wicked intentions.
We let bare a cobweb of frustrations and surrender our all to the ever seemingly invincible might of fate.
It is for the aforementioned reasons that I have compiled this collection of my both previously published (ONLINE Via multiple sites), and unpublished poems.
They cover a wide range of themes such as death, love, betrayal, heartache, religion, education, nostalgia, politics, marriage, infidelity, etc.
Read more
Other Formats: Paperback 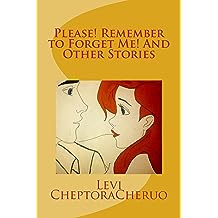 Please! Remember to Forget Me! And Other Short Stories May 20, 2016
by Levi Cheruo
$2.00
There exists a very thin line between hatred and love, between death and life, between sorrow and happiness. It is a beautiful thing to love (truthfully), and a terrible experience to lose the love of your life.
This collection of seven short stories and an epistle is a gift to those, who like me, have lost a loved one, and are struggling to let go, and surge forward meaningfully. They will remind you of those heartaches, those overstretched nights, those betrayals, those tears, those precious moments, and some, rest assured, will light a smile in your sad face, uplift your soul, and ignite your dispirited heart.
Is there such a thing as true love? Can we love anew once we lose our first true love? Can we recover from a loss of not one, not even two, but three or five people who meant the world in our lives?
May be yes! May be not!
For answers to such questions, read through the last page and remember everything happen for a reason! 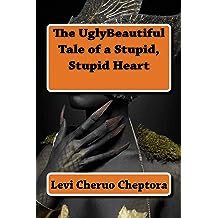 The UglyBeautiful Tale of a Stupid, Stupid Heart: When Mother Hen Eats her Grownup Chicks Mar 19, 2016
by Levi Cheruo
( 1 )
$3.00
The UglyBeautiful Tale of a Stupid, Stupid Heart is a riveting tale of a blind, carefree, yet kindest of the hearts that will amuse and anger, tickle, and unfortunately makes you shed a tear! Set in Mount Elgon, Western Kenya, the book tells a story of two neighboring families (that of Joram and that of Sikowo) hailing from the Bok, who happens to be the majority, and the Ndorobo, apparently a persecuted minority, respectively. At the core of their perennially paradoxical relationship, is the ever-emotive issue in our modern-day Kenya: land.

This is not a love story; neither is it a story about love... The UglyBeautiful Tale of a Stupid, Stupid Heart is a story, fictitious and real yet imaginatively recounted and recreated anew, about living a lie, a day at a time until death suddenly, fiercely shuts its dark door of mercy, and tramples one upon the vast emptiness. This is especially the case when David and Wairimu, apparently engaged in a forbidden passion, unfortunately finds themselves in the unforgivable, cruel and menacing jaws of death in Runyenjes thanks to a bloodthirsty mob that is on a killing spree and eager to avenge the deaths of their fellow tribesmen butchered earlier in Rift Valley, Kisumu and the Coast.

David is a dynamic character whose emotions, attitudes, and temperaments are
unfathomable. After betraying his childhood sweetheart, Chebet, and subsequently
abandoning her in her most needy hour to face an accusing world after an unexpected
pregnancy all by herself, he discreetly falls in love with Wairimu. Wairimu is an exceedingly
beautiful, gorgeous, exquisite, marvelous and amazing young woman whose irresistible
charms, wit and affection takes his life to places unknown…and finally, to his grave!

The book explains how successive regimes helped plant a seed of animosity between
the two Sabaot sub tribes, watered it, and pruned its branches until its fruition stage. After
decades of blatant indecisiveness, Sabaot Land Defense Force was born. The bloodthirsty
militia will eventually set up a parallel government and fronted a leader of its choosing who
won the Mount Elgon constituency parliamentary seat with a landslide in the contested 2007
Kenyan General Elections. The book also wittingly revisits the 2007/2008 Post Election
Violence, why it all had to happen, why it might happen yet again and implicitly offers a
pathway that might save Kenyans from an imminent recurrence. Most important, in detail, it
explains the recipes that often give birth to militias in modern-day Kenya whose illegitimate
tact of trying to solve a legitimate issue is rarely refreshing (as was the case with Sabaot Land
Defense Force).

More so, the book gives you an ideal picture of how it was living through those
turbulent moments when Kenyans maimed, beheaded, evicted, forcibly circumcised, robbed,
raped, and shattered lives of fellow Kenyans. It is a necessary retreat to ‘that’ ugly past that
we would have loved to forget as soon as last year…that past that is indeed a dark chapter in
our history as a country that we must draw meaningful lessons from. We must thus make it
our default duty reminding our seemingly ever-self-centered, crafty, and unpredictable leaders
that never again should they take us back there.
The UglyBeautiful Tale of a Stupid, Stupid Heart is a unique, nostalgic, and candid manifestation of our everyday struggles, challenges, and hurdles in life with self and others. Many a time, such hurdles are direct consequences of personal decisions resulting from the usual interactions and the seemingly never-ending complex relationships with our friends, relatives, neighbors and the ruling elite in our society.
Read more
Other Formats: Paperback 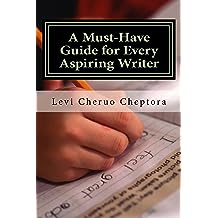 A Must-Have Guide for Every Aspiring Writer: Easy, Learnable, Realistic and Sure Ways to Earn Money as A Writer (Earning a Living as A Writer Book 1) Mar 3, 2016
by Levi Cheruo
$0.99
For you to succeed as a writer, it is critical to concentrate on something you have no doubt you can convincingly deliver on. If it is non-fiction, then perfect your non-fiction writing skills and venture into appropriate niches. If you have a creative mind like mine, then do not waste your energy on anything that is not creative in nature.
Most critical too, is your ability to communicate effectively. As such, it is paramount to understand your language, know your audience inside-outside, get accustomed to their needs, and make every single syllable count.
Before I forget, I must remind you that you will need not be a computer wizard or some award-winning rocket scientist for you to get started: just some basic computer skills (MS Excel, MS Word, MS Publisher), knowledge of Citation Skills in APA, MLA, CHICAGO/TURABIAN, and perhaps HARVARD; fluency in both spoken and written English language (as aforementioned), and most vital, a reliable internet connection.
In case you are uncomfortable with the Citation Styles like MLA & APA, then you need not to worry either. In that case, it means you will not be able to handle Academic Writing assignments but you can do assignments on articles that do not necessarily need citations.
The most important thing is if you have the passion, the desire to write, can access the internet, have the time and the energy to keep scribbling something and is willing to learn the trade. Most online writing companies offer their prospective writers an opportunity to learn and are usually willing to go an extra mile.
Lastly, you may want to sign up for a www.Payoneer.com, www.PayPal.com, or www.Skrill.com Online Banking Account. Why? They are the most likely means through which online freelance (or full-time professional) writing companies will pay you
Read more