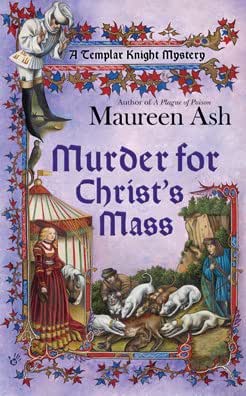 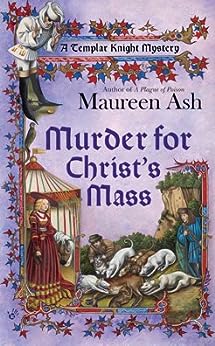 "I'll be standing in line for the next Templar Knight Mystery." -- Jayne Ann Krentz --This text refers to the mass_market edition.

Maureen Ash was born in London, England, and has had a lifelong interest in British medieval history. Visits to castle ruins and old churches have provided the inspiration for the Templar Knight Mysteries. She enjoys Celtic music, browsing in bookstores, and Belgian chocolate. She now lives on Vancouver Island in British Columbia. --This text refers to the mass_market edition.

4.4 out of 5 stars
4.4 out of 5
47 global ratings
How are ratings calculated?
To calculate the overall star rating and percentage breakdown by star, we don’t use a simple average. Instead, our system considers things like how recent a review is and if the reviewer bought the item on Amazon. It also analyzes reviews to verify trustworthiness.
Top reviews

Amazon Customer
5.0 out of 5 stars I like Maureen Ash’s historical mysteries set in 13th century England ...
Reviewed in the United States on February 20, 2016
Verified Purchase
Murder for Christ’s Mass involves the death of a clerk who worked in a local silver mint. The only clue is a coin minted 50 years earlier. I like Maureen Ash’s historical mysteries set in 13th century England during the reign of King John. Her books are historically accurate and her characters are good examples of the values and beliefs of the times. Bascot de Marin is a Templar who was imprisoned for 8 years by the Saracens (Muslims) during the Crusades. He returns to England to recover physically and spiritually. (Ash treats both the Crusades and the Templar order kindly – a refreshing change from the current fashion of Crusade/Templar bashing.) Not only do were learn the history and beliefs of the time, her books are fast paced, interesting murder mysteries. Each book is part of a series that moves through the times. Each can be read separately, but the fun is to read the series from the beginning.
Shroud of Dishonour features the circumstances surrounding the death of a prostitute in a Templar chapel.

TKDodo
4.0 out of 5 stars Great research, vivid descriptions
Reviewed in the United States on January 22, 2010
Verified Purchase
I actually do like Maureen Ash's series of books involving the Templar knight, Bascot de Marins, and his young sidekick, Gianni. She does a very good job of describing - the environment, the clothing, the food, the way of life - it all is vividly described and presents a very clear picture of life for both the peasant and ruling classes at that time. To me, that is a sign of meticulous research, and I admire that. I don't like reading historical novels full of gross errors and inaccurate representations - to me, it detracts from the storyline. That being said, the novel details the murders of two men in the village of Lincoln that seem to be linked with an old coin stamped with a former ruler, King Stephen. There is clearly a treasure trove hidden somewhere, with someone being willing to kill to keep it. Various suspects appear throughout the story, and the author adds clues throughout which lead our protagonists upon varying paths. In truth, while I like the description and the development of characters, I find that the actual mystery was less interesting, and I am not convinced that a reader could have solved it based upon what clues were given. I do think that it is very difficult to construct a good mystery tale, however, and much of what I enjoy about historical mysteries is more the ambiance than the actual conundrum itself. Conversations at time seemed stilted and rather awkward, whereas her prose flows when she is embarking upon narrative. However, I do think that the books are improving - I think each one gets better, and her characters are interesting enough that I do care about what happens to them. This book tends to focus less upon Bascot and more upon Gianni and his continued development into a young man. Other established characters like Nicolaa barely make an appearance, whereas attention is placed upon numerous secondary characters while making some social commentary upon the times. I do recommend this series, but I would probably also say that they should be read in order.
Read more
5 people found this helpful
Helpful
Comment Report abuse

L. J. Roberts
VINE VOICE
3.0 out of 5 stars 3.5 Stars - Murder at Christmas time
Reviewed in the United States on January 4, 2010
Verified Purchase
First Sentence: The stone quarry lay still and silent under the maelstrom of wind and raging clouds scudding in the skies above.

A body of a clerk for the local mint is found having been dumped in a mine. The only clue is a pristine coin from the reign of King Stephen. Castellan Nicolla de la Haye and her husband Sheriff Gerard Camville have asked templar Bascot de Marins, who has had prior success in uncovering murderers, solve this crime.

I do enjoy this series. Ash creates a very strong sense of time and place. With each book, I learn a bit more history both of England and the Templars. It is that level of detail I appreciate and find fascinating.

Ash's characters are very strong and I appreciate the back-story she provides on them. Marins seemed less conflicted in this book and it also made me wonder whether this is the end of the series, which I would find sad.

Although the story lacked suspense, it was very well plotted. I appreciate when I never quite know where it is going next. There was an excellent, unforeseen twist at the end I particularly enjoyed.

The books may not have the complexity or depth of Susanna Gregory, but for those who enjoy mysteries set in the Middle Ages, this was a better-than-good book in a very good series.

ARGTop Contributor: Pets
5.0 out of 5 stars Did not suspect the real culprit at all. The ...
Reviewed in the United States on July 24, 2015
Verified Purchase
Did not suspect the real culprit at all. The Templar is biding his time in Lincoln while his servant trains as a clerk, we will have to wait longer to find out how the new return to full duties shakes out. A man is murdered and a very old illegal coin is found nearby. Suspecting a hidden treasure horde, the sheriff asks Bascot to investigate quietly. Less help from his friends and Gianni is teaching a boy with a cleft pallette his sign language so the Templar is more alone this time. Lots of friends around just more cameo.
Read more
Helpful
Comment Report abuse

S. J. Hill
5.0 out of 5 stars Five Stars
Reviewed in the United States on May 30, 2018
Verified Purchase
Fine. On time. What more can you say about a book.
Read more
Helpful
Comment Report abuse

FamilyOfTen
5.0 out of 5 stars Good Mystery
Reviewed in the United States on February 14, 2017
Verified Purchase
The book is well qritten with likeable characters and a feel or the medieval times. Cant wait for the next one
Read more
Helpful
Comment Report abuse

Elisabeth
4.0 out of 5 stars Wonderful mystery
Reviewed in the United States on May 19, 2016
Verified Purchase
A little slow in spots, but overall measures up to the high quality of series. I look forward to the next installment.
Read more
Helpful
Comment Report abuse

M.Belle
5.0 out of 5 stars excellent
Reviewed in the United States on May 9, 2015
Verified Purchase
There are several good synopsis of the story in other reviews;suffice it to say I enjoy the series ,find the stories interesting and well written .
Read more
Helpful
Comment Report abuse
See all reviews

Veteranfrodo
5.0 out of 5 stars A Good Read
Reviewed in the United Kingdom on February 28, 2014
Verified Purchase
Written in the easy going style of Brother Athelstone and Hugh Corbett series, the Templar Knight books are superb. Have now read the last in the series and at a loose end.
Read more
Report abuse

Evelyne Perrot
5.0 out of 5 stars Murder for christ's mass
Reviewed in the United Kingdom on February 26, 2014
Verified Purchase
Fans of quality historical mysteries will be delighted to read Maureen Ash. A deft re-creation of a time, with characters you'll want to meet again.
Read more
Report abuse

Mrs. Margaret A. Golby
5.0 out of 5 stars I love medieval murder mysteries.
Reviewed in the United Kingdom on March 2, 2013
Verified Purchase
I've been buying these and reading them in chronological order... The lead character is very good and the stories well plotted.
Read more
Report abuse
See all reviews