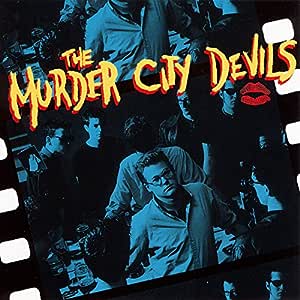 Vinyl re-issue of their 1997 debut. First run is on black and white marbled vinyl.

Abe
5.0 out of 5 stars I love it
Reviewed in the United States on July 14, 2018
Verified Purchase
It's raw. It's good.
Read more
Helpful
Comment Report abuse

wally gator
5.0 out of 5 stars GET YOUR BOOM SWAGGER ON....
Reviewed in the United States on December 12, 2008
So I discovered today that the Murder City Devils are doing a brief reunion stint on the West Coast in February. That means nothing to me, cuz I'm never getting over there, it's on the other side of the map. But I just realized that I may be on the hip tip with this band. I don't know how well known their name is, but I should give them a little ink, for the sake of spreading word on a great band. This is the type of punk rock band that the Wally Gator can get down on. Punk rock with an electric organ! Angry music that you can dance to. This is the only album by these guys that I know all the way through, but it's a hell of an album to get to know.

They've been laying low for a number of years, this album was released in '97. A friend of mine peeped me into the disc back in 2002ish and I picked it up shortly thereafter. It's a party. A tragic, grime infested party of the finest class. Solid rock and roll goes jazzy and dabbles hardcore. Think Zappas Hot Rats meets Blood For Blood. If you can't picture that, just take my word... I just pulled this out yesterday and have not been able to stop listening to it. BOOM SWAGGER BOOM, with the chickies in the back drop, ... the album kicks out with DANCE HALL MUSIC, dipping right into the organ grooves, which are both dark and poppy at the same time. This album has a little bit of everything that is good in sleazy rock and roll, and is a definate keeper in my collection. Maybe we'll be hearing some more from these cats soon, it's a good time to check 'em out I 'd say.

D. Folk
5.0 out of 5 stars It's In My Heart!
Reviewed in the United States on July 1, 2011
Initial label offering from one of the better turn of the century "Indie/Garage" outfits.
Raw, honest and ahead of it's own time, the band's cohesiveness and simplicity bisects subgeneres respectfully.
Moody's vocals are if anything honest and his songwriting much like the instrumentation remains haunting and seductive.
Having produced a dark, melodic and lyrically mature sound, the foundation of the five and later (with Leslie Hardy) 6 piece ensemble was laid to rest with the deliciously flawed RIP live recording from Seattle in 2003. Some recent tour activity has seen sold out venues and desperate fan requests for new recordings. The ulitmate status of this beloved tour de force remains to be seen.

H. Bloomer
5.0 out of 5 stars in the begining....
Reviewed in the United States on February 21, 2005
This is one of the best, IF NOT THE BEST, rock groups in the last fifteen years. I never got to see them live in person but have seen numerous videos and regret not seeing them every time I listen to any of their albums or dead low tides albums. Buy any of Murder City Devils albums and you have purchased one of the most under rated rock bands of all time. I only wish that they hadn't of called it quits.........
Read more
One person found this helpful
Helpful
Comment Report abuse

matt_wheeler@dell.com
5.0 out of 5 stars This is the best band out of Seatle since Zeke..
Reviewed in the United States on May 4, 2000
This band shows that even in a city of plaid wearin wussies and pearl jam fairies there is still a cool scene.
Read more
2 people found this helpful
Helpful
Comment Report abuse
See all reviews