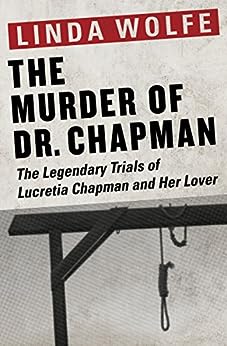 The Murder of Dr. Chapman: The Legendary Trials of Lucretia Chapman and Her Lover Kindle Edition

“Fascinating . . . Wolfe has always been a keen observer of contemporary true crime; here she has delved deeper into history to disinter a quintessential con man.” —Publishers Weekly

“A first-rate blending of true-crime, character-study and history [that] kept me riveted from the first word to the last.” —Susan Isaacs, New York Times–bestselling author of Compromising Positions

“With her customary reportorial skill, Linda Wolfe gives us a ringside seat at what must surely have been one of the most fascinating murder trials in 19th century America. . . . A wonderfully racy and illuminating slice of pre-tabloid tabloid history.” —Molly Haskell, author of Love and Other Infectious Diseases

“Wolfe has clearly done her research, but she’s also a fine storyteller, teasing out the details of who did what and how while preserving the suspense.” —Los Angeles Times

“[Linda Wolfe] captures the tenor and texture of the times, the prevailing moods and opinions, and delivers them to the reader without breaking stride.” —Kirkus Reviews

Linda Wolfe is the author of five true-crime books: The Professor and the Prostitute and Other True Tales of Murder and Madness, Love Me to Death, Double Life, The Murder of Dr. Chapman, and Wasted: Inside the Robert Chambers–Jennifer Levin Murder, an Edgar Award nominee and a New York Times Notable Book. She is also the author of My Daughter, Myself, a memoir; The Literary Gourmet, a classic cookbook; and Private Practices, a novel. Wolfe’s articles and essays have appeared in a wide variety of magazines, among them Vanity Fair, the New York Times Magazine, and New York magazine, of which she was a contributing editor. She currently writes a column about books for the website www.FabOverFifty.com.

"Murder was the favorite subject [of books and newspaper stories], and... murders that took place within the privileged class excited the greatest interest," writes Wolfe in this fascinating historical re-creation of an early 19th-century scandal. Lucretia Chapman, a wife, mother and headmistress of a boarding school near Philadelphia, and the man who called himself Lino Espos y Mina, a sociopathic liar who was the catalyst for her husband's murder, are as colorful characters as one is likely to find in true crime tales. Lino, in particular, seems to defy the laws of rationality. He turned up dirty and penniless at the Chapmans' door, boasting that he was the aristocratic son of a Mexican general who was governor of California, and was heir to gold and silver mines in his native country. Dr. William Chapman, a noted scientist, had doubts about the man who henceforth boarded with them, but Lucretia fell under his spell and soon became Lino's lover. After two years, Lino either poisoned Dr. Chapman himself or inspired Lucretia to do so. Nine days later, he married the supremely gullible Lucretia, who continued to believe his outrageous stories about why his money never arrived. Eventually arrested for murder, Lucretia and Lino were given separate trials. In a demented act of vengeance, Lino viciously maligned Lucretia with newly invented lies in a memoir he wrote before he was hanged, thus making him one of the first people in America to try to make money by publicizing his criminal activities. Wolfe's assiduous research has re-created the background and trial events in specific detail-she acknowledges the essential help of a contemporary (1832) book chronicling the trial by William Du Bois. Wolfe (Wasted) has always been a keen observer of contemporary true crime; here she has delved deeper into history to disinter a quintessential con man who cut a wide swath along the eastern seaboard among people eager to believe they were in the presence of royalty.
Copyright 2003 Reed Business Information, Inc. --This text refers to an alternate kindle_edition edition.
Read more

bibliogrammie
3.0 out of 5 stars Wasn't holding my breath!
Reviewed in the United States on September 6, 2016
Verified Purchase
I gave this an OK rating as it was an interesting book but not one that kept me rushing back to it. Perhaps it was because of the amount of time that has passed. Or perhaps the amount of superfluous information added. I generally felt the story could have been at least 100 pages shorter. The crime itself was no doubt sensational at the time but felt mundane to me. It appeared to be well researched and would have been better told in shorter form. The most interesting part was the court proceedings, noting the comparison to those of today.
Read more
5 people found this helpful
Helpful
Report abuse

Marnan
5.0 out of 5 stars MY LOCAL HISTORY
Reviewed in the United States on January 18, 2013
Verified Purchase
I live within walking distance of the former site of the Chapmans' Girls School and All Saints Church where Dr Wm Chapman is buried, so I found this book particularly interesting. The author does a wonderful job telling a 200 year old story as if it happened yesterday.
Maps and pictures are always a helpful tool in non-fiction, this book has neither.
Although the author mistakenly locates All Saints Church in Hulmeville, PA ... when it clearly stands in Northeast Philadelphia on the edge of Bucks County, I give The Murder of Dr. Chapman 5 stars

Kindle Customer
5.0 out of 5 stars Fascinating book!
Reviewed in the United States on June 6, 2019
Verified Purchase
This book was intriguing from start to finish. It involved a murder case of which I'd never heard. I highly recommend it to other true crime readers.
Read more
Helpful
Report abuse

Lorraine P. P. Saunders
4.0 out of 5 stars Four Stars
Reviewed in the United States on August 10, 2016
Verified Purchase
no thanks
Read more
One person found this helpful
Helpful
Report abuse

Rob Hardy
HALL OF FAME
5.0 out of 5 stars A Murderous Love Triangle in the New Republic
Reviewed in the United States on March 14, 2004
There was a delicious scandal making the news in 1831, leading to a standing-room-only trial. Someone surely dubbed it the "trial of the century," as we do even now, with our own interest in contemporary murder and adultery. Then those involved died off, and the years dimmed even collective memories of the trials of Lucretia Chapman and her lover Lino Espos y Mina for the murder of her husband. A good story won't die, and a good story indeed is in _The Murder of Dr. Chapman_ (HarperCollins) by Linda Wolfe. Wolfe has written on true crimes before, but has previously concentrated on contemporary subjects. She has superbly given historical context for this story, however, and produced a satisfying work full of period detail and comparisons of those times and our own.
Lucretia Winslow moved to Philadelphia in 1813. She was 25 years old, an age that marked her as liable to spinsterhood. She was tall and striking, and smart, and she moved to Philadelphia to accept a teaching position, one of the respectable ways unmarried women could make it in the world. Of course, she probably made the move to increase her marital prospects, too, and in 1818 she indeed married William Chapman. William was ten years older than Lucretia and several inches shorter. He was an accountant, but studied ways to cure stuttering. They may not have had a passionate marriage, but it began with respect and affection. The stolid William eventually ceased to satisfy her. Enter the third vertex of the triangle. Lino was 23 years old, a superb conman and criminal deported from Havana. He had bilked plenty of others before wandered to the Chapman's house, told a tale of how he had been robbed, and entranced both William and Lucretia, who decided that he should stay with them until his affairs were straight and his wealthy family started sending him money again. Within a month, Lino and Lucretia were lovers, and William was dead. It seemed that he had died of natural causes, food poisoning or cholera. Nine days later, Lino married Lucretia, who took a heartbreakingly long time eventually to realize she was being conned and stolen from. Eventually it became clear that Lino had bought arsenic days before William first turned ill. When he was arrested for William's death, so was she. Naturally, their trials form the climax of this riveting book.
So, was it murder, and if so, who did it? It would be wrong to tell how the juries for their separate trials decided on the issue, even though there is a gallows and coffin on the cover of the book. Wolfe has recreated the trials in fascinating detail. The newspapers enjoyed scandal then and now, but scandals as domestic news were a zesty novelty. The papers called Lino "a villain of no ordinary character" and Lucretia "a woman of violent passions." Wolfe herself concludes that probably Lucretia did not take part in her husband's murder, but that "probably" is going to have to be judged by every reader. It is an assignment that no one interested in thrilling true-crime narratives will want to pass up.

C Wahlman
4.0 out of 5 stars Surprisingly good
Reviewed in the United States on October 28, 2008
This is your typical criminal case drudged up from the past and written in a style more befitting a true crime novel than history. Well researched, but with the added vagaries to create suspense and entice, Linda Wolfe manages to do a successful job with this piece.

It is extremely easy to read, short, and written clearly. The flow of the story makes it difficult to put it down.

The case itself is incredible. Lucretia Chapman seemed to have lived a charmed life until her husband dies. Or did she? As a stranger persists in her home (and her bed?), he arouses suspicion ... Was Dr. Chapman murdered? Who is this stranger? And who is Lucretia Chapman really? By exposing these once living people with all that remains of their lives, Wolfe is able to create a compelling and almost complete picture of their lives. Wolfe bewitches readers in this fascinating story with excellent background information to ease you into this time (1830s northeastern America).

I really enjoyed this book. I thought it was nice--nothing ground breaking here, but a pleasure to read. I am glad I read it, and will probably read it again. Recommend.