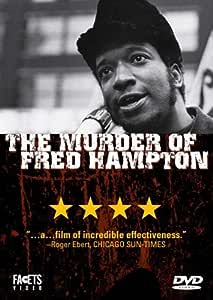 The Murder of Fred Hampton

THE MURDER OF FRED HAMPTON began as a film portrait of Hampton and the Illinois Black Panther Party, but half way through the shoot, Hampton was murdered by Chicago policeman. In an infamous moment in Chicago history and politics, over a dozen policeman burst into Hampton s apartment while its occupants were sleeping, killing Hampton and fellow Panther Mark Clark and brutalizing the other occupants. Filmmakers Mike Gray and Howard Alk arrived a few hours later to shoot film footage of the crime scene that was later used to contradict news reports and police testimony. Recently restored and reworked by Gray, THE MURDER OF FRED HAMPTON is a chilling slice of American history.

4.5 out of 5 stars
4.5 out of 5
59 customer ratings
How does Amazon calculate star ratings?
Amazon calculates a product’s star ratings based on a machine learned model instead of a raw data average. The model takes into account factors including the age of a rating, whether the ratings are from verified purchasers, and factors that establish reviewer trustworthiness.
Top Reviews

Margaret D. Curtis
5.0 out of 5 stars Powerful young man and his great promise
Reviewed in the United States on November 21, 2015
Verified Purchase
As a history buff with a major interest in African-American history, this book is very well written and depicts a turbulent time in America. The author document every fact and also gives you a sense of the man Fred Hampton and also the times and flavor of the late 60's. I really loved this book, but it also brings to home the tragic circumstances of this country and the way it treats people who have opposing ideas to the power structure. It shows the reader the sadness to family, friends, and the community and the wonder of what Fred Hampton could have been to this world and his generation if his murder had not been committed. In view of recent racial problems of today, you can see how the current problem is a direct result of policies which condoned the total annihilation of the productive people and programs of the Black Panther Party. After reading this book, all I can say is that history should re-evaluate the prevailing opinions of the Black Panther Party.
Read more
5 people found this helpful
Helpful
Comment Report abuse

Leon T. Lacey
5.0 out of 5 stars Angering and Sobering!
Reviewed in the United States on March 10, 2020
Verified Purchase
I was left shaking my head, saddened and disgusted!! This film tells the life story of Civil rights Activist and Black Panther Fred Hampton and the prominent work he did for Soical change during the Civil rights movement, but midway through the film Fred was Brutally murdered by the Chicago PD and the despicable attempt to cover it up! Despite the sobering reality of how civil rights leaders risked their lives fighting against Soical injustices, Fred Hampton's legacy was established and continues today!👍 #Powertothepeople!🔥🔥🔥
Read more
2 people found this helpful
Helpful
Comment Report abuse

umalumna
5.0 out of 5 stars I highly recommend this documentary
Reviewed in the United States on July 16, 2016
Verified Purchase
I highly recommend this documentary. I'd come across references to his assassination in books & films about the 1968 Democratic Convention, the Chicago 8 (aka 7), The Black Panthers, etc. but this film showed me what we truly lost when Fred Hampton died - his dynamic personality, keen intelligence & extensive knowledge about a host of critically important subjects, his astounding maturity & leadership skills (at only 21 years old), his, perhaps, unexpectedly gentle priorities and agenda (education; neighborhood health clinics; meal programs for children; street gang cease-fires and reconciliation). It also demonstrated how reprehensible the Chicago Police Department was, in particular their participation in criminal conspiracy and murder. The conduct of the Prosecutor's Office was inexcusably lazy and morally offensive, as well. This documentary is informative, engaging and, for me, invaluable. I'm grateful that Amazon had it available for streaming.
Read more
3 people found this helpful
Helpful
Comment Report abuse

Chris
5.0 out of 5 stars Amazing Film, Amazing man
Reviewed in the United States on March 4, 2018
Verified Purchase
The best footage you will ever see of Fred Hampton. I loved this film and am going to get a hard copy to keep forever
Read more
2 people found this helpful
Helpful
Comment Report abuse

A. Slay
5.0 out of 5 stars Another shining light dimmed
Reviewed in the United States on January 5, 2010
Verified Purchase
Fred was killed well before his prime , this young guy[KILLED AT 21 YEARS OLD} had an undying love for his people , sought justice for all disenfranchised people , but this corrupt gov't we live under , stomps another great displaced african leader out . his passion , intellect , and motive was so strong , he was a threat to the establishment ,his voice would have only gotten louder . all positive black institution are quieted quickly when to much good influence and power in evident , but , UNCLE SAM seems to not be able to control thug gangs , such as bloods and crypt after 40 years of existance . REpectfully other reviewer pres. Barack is no Fred Hampton !!!!!.
This doc. has great detail and insight into chairmans last days before his murder , line item detail of the police lies , and misrepresentations . thought provoking , another reminder of the importance of knowing from wence you came and where you need to go . this system will never view ,the desendants of africans brought here against there will, as equals . it will continue to insult us , continue to diminish an african way of life ,that we have mostly lost anyway, and we will allow it ! get the dvd

Traci
5.0 out of 5 stars I AM A REVOLUTIONARY
Reviewed in the United States on October 25, 2018
Verified Purchase
LONG LIVE FRED HAMPTON! This opened my eyes to many things. Thing I already knew, I had to question again. Thank you Fred for all the work you did. It was amazing to see him in action. I felt like I was there during that time. We are still in the fight and after seeing this I decided to join the fight. Your work, all the work the Black Panthers did, is not in vain. Rest easy brother.
Read more
Helpful
Comment Report abuse

K. Ketcham
4.0 out of 5 stars powerful
Reviewed in the United States on March 7, 2013
Verified Purchase
the only reason it gets a four instead of a five is that there isn't closed captioning which it needs as the historical footage needs the assist! the rhetoric is powerful and it is difficult to understand all the words...the murder of Hampton itself is so interesting in that the police's story is so fantastic compared to the actual factual evidence presented by the Panthers...very interesting for anyone who has doubts with how authorities present cases...
Read more
3 people found this helpful
Helpful
Comment Report abuse
See all reviews from the United States

Nick Grant
5.0 out of 5 stars Fred Hampton the everyman hero
Reviewed in the United Kingdom on December 2, 2019
Verified Purchase
This movie contains all that was ever kept on film of Fred Hampton leading the fight for justice and equality 50 years ago. He was handsome, articulate, fearless, a brilliant motivator and organiser, and so good that the FBI with help from the Chicago police pumped 99 bullets into his apartment, with the last two fired point blank to his head. The authorities tried every which way to claim there was a gunfight precipitated by Fred. Oh no there wasn't. Cold blooded political murder because Fred was not just a Black Panther but a leader of all working class people in his area. He will be remembered this Weds 4 December 50 years to the day since he was taken out.
Read more
Helpful
Sending feedback...
Thank you for your feedback.
Sorry, we failed to record your vote. Please try again
Report abuse