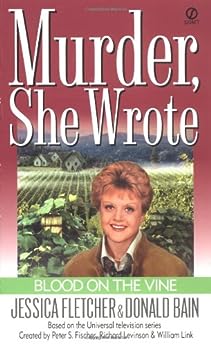 Murder, She Wrote: Blood on the Vine (Murder She Wrote Book 15) Kindle Edition

by Jessica Fletcher (Author), Donald Bain (Author) Format: Kindle Edition
Book 15 of 56: Murder She Wrote
See all formats and editions
Sorry, there was a problem loading this page. Try again.
Jessica Fletcher must solve a wine country caper when she takes a trip to Napa Valley in this mystery in in the long-running series.

Jessica Fletcher is visiting California wine country while doing research for her next book, and invites her old friend, Scotland Yard detective George Sutherland to join her at a cozy Bed and Breakfast. No sooner do they arrive than they find the valley abuzz over the murder of a waiter at the restaurant owned by infamous ex-Hollywood heavyweight Bill Ladington. Ladington’s blatant womanizing and involvement in a bitter vineyard land dispute have already marked him as a dubious character—and a possible suspect.

But when Ladington turns up dead himself from a supposed “suicide,” Jessica knows that a murderer is on the loose—and with a little help from George, she must try and bottle up a motive for murder from an extensive list of less-than-vintage suspects...

Jessica Fletcher is a bestselling mystery writer who has a knack for stumbling upon real-life mysteries in her various travels. Donald Bain, her longtime collaborator, was the writer of more than one hundred and twenty books, many of them bestsellers.

In the hot seat

The temperature of the mud bath continued to rise, and I realized it was reaching a dangerous point. My flesh was on fire, and my head pounded.

“Could you make the mud cooler?” I asked.

“That’s not possible,” she said. Her bitter, angry expression said she had no intention of doing that, and it occurred to me that she was the one who had turned up the temperature.

“I have to get out now,” I said, attempting to sit up, but the mud blanket was too heavy. Mary Jane placed her hands--strong hands--through the mud on my shoulders, holding me down. “Let me up!” I snapped. “I’ve had enough.”

“What do you know about Louis’ death?” she hissed, continuing the pressure on my shoulders.”

“Nothing, just that he was murdered.” I now yelled, “Let me out, damn it!”

If she pushed down any more, I would drown in the boiling mud, and there wasn’t a thing I could do about it…

Tullia
5.0 out of 5 stars Well done!
Reviewed in the United States 🇺🇸 on February 13, 2018
Verified Purchase
As always, these Murder She Wrote mysteries are well written with an intricate and complex plot. This one is set in the wine country in California where Jessica visits friends who have a beautiful B & B. She is joined by her dear friend, George, the Inspector from Scotland Yard.

Jessica is invited to luncheon at a nearby vineyard run by a nasty wine maker who the day after she visited him commits suicide, or so it seems. His son insists he was murdered, and prevails upon Jessica to investigate and find out who murdered his father.

At the invitation of the winemaker's son, Jessica and George move into the mansion once owned by the deceased wine maker to be near his family in order to conduct an investigation. The forensic report shows that the winemaker was probably murdered. It is Jessica who reveals who murdered the wine maker.

I read a few reviews before getting this book and they said they learned a lot about wine making and I must admit, that is one reason I began reading it. However I was disappointed because I learned nothing about wine making from this book. That is not the authors fault of course. Overall I really enjoyed it and now I want to read more Murder, She Wrote novels.
Read more
Helpful
Report abuse

A. Bond
5.0 out of 5 stars Blood on the Vine
Reviewed in the United States 🇺🇸 on August 21, 2012
Verified Purchase
Jessica Fletcher is on her way to Napa Valley to relax and tour some wineries in preparation for her next novel. She invites her longtime friend, Scotland Yard detective George Sutherland, to come along. As they relax at a bed and breakfast, she receives an invite from Bill Ladington, a former Hollywood heavyweight and now winery owner. When she meets him, she finds him brash, unforgiving, and unkind to his family and workers. He discusses a land dispute and local murder that happened at his restaurant. The next day, Jessica is stunned by the news report that Bill Ladington committed suicide. She believes he was murdered and investigates to find the culprit. This mystery was a quick, fun read. The plot was outstanding. It kept me guessing who the killer was until the very end. The suspects were dastardly drawn, each one having a secret that could place them in danger if it were revealed. If you want a great mystery, go no further.
Read more
2 people found this helpful
Helpful
Report abuse

Kindle Customer
5.0 out of 5 stars Suspenceful
Reviewed in the United States 🇺🇸 on May 28, 2021
Verified Purchase
This is one of the better mysteries in my opinion. It keeps you on your toes to the end. Vintage!
Read more
Helpful
Report abuse

Ex-Patty
5.0 out of 5 stars No Whining from me!
Reviewed in the United States 🇺🇸 on December 26, 2012
Verified Purchase
Living in (South American) Wine Country and having visited Napa Valley, I felt at home with Jessica in this book. I would have liked more wine-making knowledge weaved into the story, but it did have the basics. The plot had me guessing to the final pages as to the identity of the guilty party. But overall, I felt terribly sorry for Jessica's (boy)friend, George Sutherland, of the Scotland Yard. He truly had the worst possible of vacations on which everything went wrong for him and yet he never complained. His dedication to Jessica should be acknowledged someday soon, poor guy.
Read more
3 people found this helpful
Helpful
Report abuse

Gerard Triano
4.0 out of 5 stars Delightful Murder She Wrote Novels
Reviewed in the United States 🇺🇸 on February 2, 2018
Verified Purchase
Another interesting whodunit in a terrific series. The author captures Jessica Fletcher's voice very well. And is well plotted and keeps one interested and guessing
Read more
Helpful
Report abuse
See all reviews

Hannah
5.0 out of 5 stars Five Stars
Reviewed in the United Kingdom 🇬🇧 on February 6, 2016
Verified Purchase
Bought for someone else but they enjoy these types of books very much.
Read more
Report abuse

michelle.perry
5.0 out of 5 stars totally awesome product
Reviewed in Canada 🇨🇦 on May 17, 2016
Verified Purchase
am so excited as i have all the collection of this series in dvd now i am collecting the books am so thrilled to have this.
Read more
Report abuse
See all reviews
Report an issue
Does this item contain inappropriate content?
Report
Do you believe that this item violates a copyright?
Report
Does this item contain quality or formatting issues?
Report