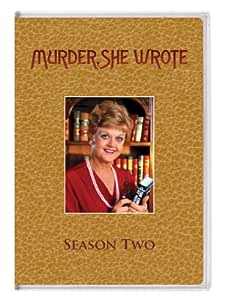 Angela Lansbury (Actor) Rated:
NR
Format: DVD
4.7 out of 5 stars 468 ratings
See More
Available at a lower price from other sellers that may not offer free Prime shipping.

Primetime Emmy Award nominee Angela Lansbury is back on the case in all 22 episodes of the critically acclaimed series, Murder, She Wrote Season Two. Rejoin Jessica Fletcher, everyone's favorite mystery writer, back in Cabot Cove, where she pens her whodunit books and keeps finding that her life is imitating her art. Teamed with some of the biggest guest stars on television, including Jerry Orbach, Adrienne Barbeau, Dick Van Patten and Carol Lawrence, Jessica continues her quest to find the truth in even the murkiest circumstances. Catch the season two of Murder, She Wrote, the classic mystery series that "…remains well worth revisiting two decades later" (Josef Adalian, Daily Variety).

4.7 out of 5 stars
4.7 out of 5
468 global ratings
How are ratings calculated?
To calculate the overall star rating and percentage breakdown by star, we don’t use a simple average. Instead, our system considers things like how recent a review is and if the reviewer bought the item on Amazon. It also analyzes reviews to verify trustworthiness.
Top reviews

RR
5.0 out of 5 stars Gets better with time!
Reviewed in the United States on April 1, 2013
Verified Purchase
There are sadly few series that manage to maintain a high level of quality for even three or four seasons, so Murder, She Wrote's ability to consistently delight us after 12(!) is especially laudable. While sometimes unfairly pigeonholed as a show that only people above a certain age can appreciate, I've found that this is endlessly rewatchable, highly entertaining programming for *everyone.*

Unlike most of today's eye-rollingly slick, "edgy" shows that rely on high tech gizmos and gore, Murder, She Wrote's mysteries are the type of which the brilliant Dame Agatha Christie would approve, relying on the timeless tools of deductive reasoning and knowledge of human nature. Granted, most of these mysteries aren't as brilliantly plotted and paced as Christie's, but whose are?! Given the more limiting one-hour TV format, I found the majority of MSW's mysteries highly satisfying.

This show remains engaging and well worth watching even after one's seen the episodes enough times to know 'whodunit'---and how many mystery shows can one say THAT about?! As fellow fans have noted, there's joy in (re-)watching these fine actors' performances, identifying some of the best guest stars ever assembled, and in "visiting" the show's varied locales, most notably the cozy (albeit lethal!) enclave of Cabot Cove. The show contains heartwarming humor and never gets bogged down in the tiresome romantic 'angst' that sinks so many other shows.

Best of all, there's something truly inspiring about a heroine who's neither young nor reliant on romantic relationships for her fulfillment, yet still leads a remarkably rich, full and happy life. It's sad how few fictional heroines fit that description!

This second season is probably my very favorite of all 12. The mysteries are endlessly engaging, the settings are used to great effect, and Jessica and the supporting characters seem to be at their very most charming and lovable.

I truly believe this is a series well worth owning and passing on from one generation to the next. I'm confident that most of my fellow mystery fans, regardless of age, will cherish this series as much as I do!
Read more
25 people found this helpful
Helpful
Comment Report abuse

mypiedog
5.0 out of 5 stars Great DVD's!
Reviewed in the United States on June 4, 2015
Verified Purchase
I don't know why others had so many problems with these DVDs but my first purchase of Season #1 played without issue. Season #2 was my most recent purchase and it too played without issue. Murder, She Wrote was my all time favorite TV show and I am so glad to have it come out in DVD form. We have a motorhome and have recently sold our house and are staying at a campground that does not offer cable TV hookup while our new home is being built. These two sets have been a life saver on rainy days when there is not much to do. I'm sure I will be buying Season #3...#4 and more!! I have rarely been disappointed with my purchases from Amazon.......and I've bought a lot! Amazon will always make it right if there is a problem. But these DVD's, for me, have been very enjoyable.
Read more
8 people found this helpful
Helpful
Comment Report abuse

DEWEY M.
5.0 out of 5 stars "IF MURDER WERE A DISEASE, YOU WOULD BE CONTAGIOUS."
Reviewed in the United States on March 13, 2012
Verified Purchase
"Every time there's a dead body, you're in the neighborhood", a police detective tells Jessica Fletcher (Angela Lansbury) in the episode "One Good Bid Deserves A Murder." He concludes, "If murder were a disease, you'd be contagious." True, everywhere that Jessica goes, murder follows. The second season of "Murder, She Wrote" features plots that are even more diverting and tighter than the excellent first season. Angela Lansbury has a few more opportunities to display her amazing versatility. In the Season Opener "Widow Weep For Me," (featuring Lansbury's "Sweeney Todd" co-star Len Cariou) Jessica pretends to be a rich diva while she investigates the murder of a friend at a Carribean resort. Lansbury also plays dual roles, as Jessica and Jessica's British cousin Emma Macgill, in the episode "Sing A Song Of Murder." While in New Orleans, Jessica encounters Mardi Gras madness, mayhem, and murder in the episode "The Perfect Foil."
Jessica also solves murders in her home base of Cabot Cove, assisted by her good friends Dr. Seth Hazlett (William Windom) and Sheriff Amos Tupper (the delightful Tom Bosley) in the episodes "Joshua Peabody Died Here...Possibly", "Keep The Home Fries Burning," "Sticks And Stones" and "If A Body Meets A Body." In the popular episode "Keep The Home Fries Burning", Jessica, Seth, and Amos go to a busy restaurant where, during the breakfast rush, a jar of poisoned preserves ends up at too many tables. Michael Horton returns as Jessica's adorable nephew Grady in the episodes "Murder By Appointment Only" and "Christopher Bundy Died On Sunday." In "Murder By Appointment Only," guest star Jayne Meddows Allen, as a snobby cosmetics diva, humorously calls Jessica's home base "Cabbage Cove" instead of Cabot Cove.
Guest star Ann Blythe ("Mildred Pierce", "The Helen Morgan Story") is driven to the brink of insanity in the suspenseful episode "Reflections Of The Mind." Insanity/schitzophrenia is also an important part of the plot of "Menace, Anyone?", featuring Doug McKeon ("On Golden Pond") and Brian Cranston ("Malcolm In The Middle", "Breaking Bad") as hot-headed tennis pros. My two favorite episodes of season two are entirely different in terms of tone. In the wildly fun and over-the top episode "Jessica Behind Bars," a riot occurs immediately after Jessica is trapped inside a women's prison, along with guest stars Vera Miles ("Psycho"), Yvonne De Carlo ("The Munsters"), Adrienne Barbeau ("Maude") and Eve Plumb ("The Brady Bunch"). In the excellent episode "Trial By Error", Jessica serves as foreperson on a jury for a murder trial that takes a dramatic twist. Angela Lansbury remains as charismatic as ever; making "Murder, She Wrote" extremely entertaining, and addictive, viewing.
Read more
7 people found this helpful
Helpful
Comment Report abuse
See all reviews

heva
5.0 out of 5 stars Great gift
Reviewed in the United Kingdom on October 6, 2020
Verified Purchase
Brilliant box set for my Daughter we both love this program so well used 😁
Read more
Report abuse

Mr Sam Thomas Taylor-Smith
5.0 out of 5 stars Amazing must see......
Reviewed in the United Kingdom on August 20, 2020
Verified Purchase
I love MSW but why is there always a murder when Jessica shows up????
Read more
Report abuse

Linda Farrell
5.0 out of 5 stars Murder still going strong
Reviewed in the United Kingdom on July 6, 2012
Verified Purchase
Season 2 without a doubt continues the sucess and brilliance of Season 1. JB Fletcher is back to don the Typrewriter and Magnifying Glass. One of the best elements in these episodes is when Jessica traps the Killer or tricks them into saying something incriminating and along with that we get the comedy duo of Sherrif Tupper and Doc Hazlet who when are not working arguing over th existence of Cabbot Cove's supposed Founder Jessica Peabody. My Favourite Episodes were
Widow Weep for me, Murder in the Afternoon, Sing a Song of Murder, Reflections of the Mind, A Lady in the Lake, Dead heat, Jessica behind bars, Trial by error, keep the home fries burning, One good bid deserves a murder, if a body meet a body, Christopher Bundy died on a sunday, Menace anyone
Read more
One person found this helpful
Report abuse

Christine
5.0 out of 5 stars very chuffed with it
Reviewed in the United Kingdom on December 7, 2019
Verified Purchase
just what it said it was
Read more
Report abuse
See all reviews