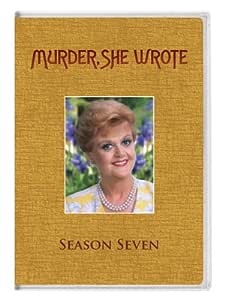 Get ready for yet another chapter of television's most clever series as all 22 episodes of Murder She Wrote: Season Seven arrive on DVD! Rejoin Golden Globe winner Angela Lansbury as writer/detective Jessica Fletcher in the season that earned a Golden Globe nomination and two Primetime Emmy Award nominations! With her at the scene of the crime is an impressive lineup of guest stars, including Patricia Neal and the iconic Jerry Orbach. This 6-disc set includes the entertaining Bonus Feature "The Perils of Success" (exclusive interviews with Lansbury and other members of the cast and crew) and a season highlights reel. Whether Jessica is partnered with insurance investigator Dennis Stanton (Keith Michell), making her case in Nashville or even working to clear her own name, it's no mystery why the acclaimed series earned 41 Primetime Emmy Award nominations and 16 Golden Globe nominations during its many years of broadcast. Murder She Wrote: Season Seven: so good, it's a crime!

4.7 out of 5 stars
4.7 out of 5
308 global ratings
How are ratings calculated?
To calculate the overall star rating and percentage breakdown by star, we don’t use a simple average. Instead, our system considers things like how recent a review is and if the reviewer bought the item on Amazon. It also analyzes reviews to verify trustworthiness.
Top reviews

retrobabe
5.0 out of 5 stars Another great season! Jessica is back to solve the mystery!
Reviewed in the United States on January 12, 2015
Verified Purchase
The incomparable Angela Lansbury returns again as Jessica Fletcher and viewers are sure to be pleased as our beloved sleuth from Cabot Cove unravels the clues and uncovers the truth behind twisted murder mysteries in this season of Murder She Wrote. It's always fun to "travel" with Jessica and try to solve the mystery with her, and like in previous seasons before it, Season 7 does not disappoint in the intrigue and fun category. I have always loved Murder She Wrote because it is just a pleasant show to watch. I can always relax and enjoy the show without ever having to worry about what cuss words I will hear, or what graphic/bloody images or nudity I will see. Each episode weaves a good mystery and Jessica Fletcher is a wonderful and likeable character. I think everyone could use a Jessica Fletcher somewhere in their lives. I believe it is truly sad that Angela Lansbury was never awarded for her work in this series, because she always played Jessica with so much sincerity and warmth. There were many episodes that I liked this season, but her performance in the episode "Thursday's Child" touched me. Spoiler alert! Jessica encounters a woman with whom her beloved husband Frank may have had a child with while he was away at war, and she has to learn if it is the truth or not.
There were moments in the episode where Angela Lansbury didn't even say a word of dialogue and the look in her eyes made me almost cry. An emotional impact from just a mere look in her eyes and her deafening silence.
That is the mark of a superior actor in this superior series.
Read more
5 people found this helpful
Helpful
Comment Report abuse

frhompty
5.0 out of 5 stars If you like Murder She Wrote, you will want to get all of the seasons that were made.
Reviewed in the United States on December 21, 2018
Verified Purchase
I have always liked the series "Murder She Wrote" with Angela Lansbury. I like to watch these for a break in between the many movies I like that have extreme action in them. Murder She Wrote is very entertaining but also slower paced than a lot of the newer movies/series.
Read more
Helpful
Comment Report abuse

Einsatz
4.0 out of 5 stars “Not another tape from that Stanton guy!”
Reviewed in the United States on August 25, 2017
Verified Purchase
Season seven was expected to be the final season, hence the last line of the last episode, “that’s all she wrote.” With three of the characters winking at the audience. But the series survived, despite ill-conceived “experiments” with the format. They could have titled this season as the Dennis Stanton (Keith Michell) show, as episodes 3, 8, 10, 12, and 18 were exclusively devoted to that character. I for one did not tune in to watch Murder, She Wrote only to find a show about another character that I didn’t want to watch. This was a deceptive practice at best.
Read more
Helpful
Comment Report abuse

Love England!
5.0 out of 5 stars Murder She Wrote 7 Season, another great one
Reviewed in the United States on July 2, 2011
Verified Purchase
Season 7 another great season of Murder She Wrote. Sure there are non-Jessica episodes, but I like the ones with Dennis Stanton, and Harry McGraw too. This season contains one of my favorite episodes A Body to Die for, It's the one where Cabot Cove's new gym owner prompts women in town to take up physical fitness again,along with Where Have You Gone Billy Boy? the one with the creepy ventriloquist.

Great price, super-fast shipping. I actually received it 4 days earlier than expected. There was one problem. My box for Disc 5 was broken at the top where it closed,(broken all along the top) no damage to the cd though, plays just fine.(4 episodes on disc 5) But other than that very satisfied.

Amazon Customer
5.0 out of 5 stars Great show for family.
Reviewed in the United States on August 10, 2017
Verified Purchase
This is my 7th Season of Murder She Wrote and my entire family from my 8 year old son to my 81 year old mom enjoy the "Whodunit"! Angela Lansbury plays a character with a blend of character, good clean family values and convictions.
Read more
One person found this helpful
Helpful
Comment Report abuse

Snickerdoodle
5.0 out of 5 stars Great entertainment!! Good quality!
Reviewed in the United States on March 13, 2020
Verified Purchase
We all have loved Murder She Wrote for years now. I wish I had all the seasons. This is a good quality dvd. It's very nice to have.
Read more
Helpful
Comment Report abuse

ChihuahuaMom
5.0 out of 5 stars Murder, She Wrote
Reviewed in the United States on June 21, 2013
Verified Purchase
I absolutely loved the TV series and didn't miss it if possible. Since it has not been brought back, I have ordered several seasons, and am trying to view them in order. I haven't watched this season yet, but I have never seen a 'bad' Murder, She Wrote. Angela Lansbury always does a superb role in these series. I would recommend any of the series, in order or not, they don't build on each other like a soap opera, so you can enjoy them in any order.
Read more
One person found this helpful
Helpful
Comment Report abuse

Carmen
5.0 out of 5 stars Murder, She Wrote My Favorite
Reviewed in the United States on May 13, 2014
Verified Purchase
Murder, She Wrote has always been my favorite show ever. I never get bored of watching the repeats at all. The Cabot Cove episodes are my favorite of all times. The one's without JB Fletcher are still great.
I almost have the whole collection in DVD now. Not that I want to be cheap but sorry to say they are getting very expensive and I'm only missing about 3 of them and they are all over $45 for one DVD. :(
Read more
One person found this helpful
Helpful
Comment Report abuse
See all reviews

Christopher Paul MORGAN
5.0 out of 5 stars Fabulous entertainment
Reviewed in the United Kingdom on August 12, 2017
Verified Purchase
Fabulous. I don't remember seeing this later series here in the U.K. It's real fun spotting the clues in these whodunits and working out who the murderer is. They must be very honest people in Cabot Cove (or whatever location Jessica Fletcher visits) because when the guilty party is caught by the cops at the end of every episode they always own up straight away and tell them why they did it. Mrs Fletcher also tells them exactly how she solved the mystery. This may not be a subtle show, but it is vastly entertaining.
Read more
2 people found this helpful
Report abuse

Ms. T. Carter
4.0 out of 5 stars Good condition throughout
Reviewed in the United Kingdom on December 3, 2019
Verified Purchase
Good condition throughout. The case all intact and DVDs work perfectly. Delivery was quick with no problems. It was a joy to receive and start watching this past season. Looking forward to purchasing the next one.
Read more
Report abuse

Amy Beard
5.0 out of 5 stars Brilliant
Reviewed in the United Kingdom on October 24, 2013
Verified Purchase
was very pleased with the product well packaged very happy with the purchase and very good price to pay .I found nothing wrong with the item i loved it and would buy more.I gave 5 stars because the service was very good item to buy .
Read more
One person found this helpful
Report abuse

Sonia Graham
5.0 out of 5 stars A great selection...
Reviewed in the United Kingdom on September 4, 2015
Verified Purchase
A guaranteed assortment of great mystery stories. Changing locations and cultures add variety and interest to many of the stories...hoping to collect many more of Ms. Lansbury's excellent recordings.
Read more
Report abuse
See all reviews
Pages with related products. See and discover other items: angela lansbury movie