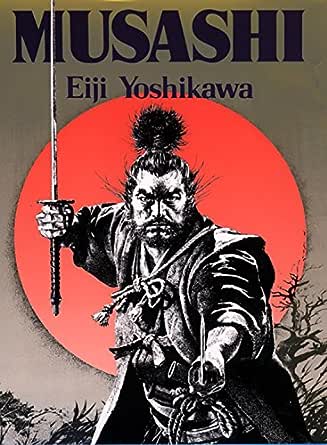 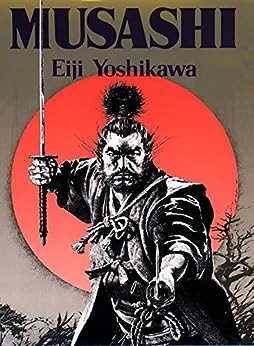 Musashi: An Epic Novel of the Samurai Era Kindle Edition

A stirring saga and one that will prove popular not only for readers interested in Japan.

The Gone with the Wind of Japan.

Listeners will be enthralled by this classic tale of feuding samurai locked in battle. Narrator Brian Nishii's performance is epic, giving life to the novel's sprawling cast of characters...Yoshikawa's imagery is steeped in historical Japanese environs, which alone make this immersive audiobook captivating. Nishii's tone is often playful and fun yet provides the necessary gravitas to carry listeners through this long, rewarding adventure set in ancient Japan.

-- "AudioFile" --This text refers to an alternate kindle_edition edition.

[THE OPENING PAGES OF THE NOVEL, WHERE MUSASHI IS INTRODUCED BY HIS GIVEN NAME, TAKEZO.]

Takezo lay among the corpses. There were thousands of them.

"The whole world's gone crazy," he thought dimly. "A man might as well be a dead leaf, floating in the autumn breeze."

He himself looked like one of the lifeless bodies surrounding him. He tried to raise his head, but could only lift it a few inches from the ground. He couldn't remember ever feeling so weak. "How long have I been here?" he wondered.

Flies came buzzing around his head. He wanted to brush them away, but couldn't even muster the energy to raise his arm. It was stiff, almost brittle, like the rest of his body. "I must've been out for quite a while," he thought, wiggling one finger at a time. Little did he know he was wounded, with two bullets lodged firmly in his thigh.

Low, dark clouds shifted ominously across the sky. The night before, sometime between midnight and dawn, a blinding rain had drenched the plain of Sekigahara. It was now past noon on the fifteenth of the ninth month of 1600. Though the typhoon had passed, now and then fresh torrents of rain would fall on the corpses and onto Takezo's upturned face. Each time it came, he'd open and close his mouth like a fish, trying to drink in the droplets. "It's like the water they wipe a dying man's lips with," he reflected, savoring each bit of moisture. His head was numb, his thoughts the fleeting shadows of delirium.

His side had lost. He knew that much. Kobayakawa Hideaki, supposedly an ally, had been secretly in league with the Eastern Army, and when he turned on Ishida Mitsunari's troops at twilight, the tide of battle turned too. He then attacked the armies of other commanders--Ukita, Shimazu and Konishi--and the collapse of the Western Army was complete. In only half a day's fighting, the question of who would henceforth rule the country was settled. It was Tokugawa Ieyasu, the powerful Edo daimyo.

Images of his sister and the old villagers floated before his eyes. "I'm dying," he thought without a tinge of sadness. "Is this what it's really like?" He felt drawn to the peace of death, like a child mesmerized by a flame.

Suddenly one of the nearby corpses raised its head. "Takezo."

The images of his mind ceased. As if awakened from the dead, he turned his head toward the sound. The voice, he was sure, was that of his best friend. With all his strength he raised himself slightly, squeezing out a whisper barely audible above the pelting rain. "Matahachi, is that you?" Then he collapsed, lay still and listened.

"Takezo! Are you really alive?"

"Yes, alive!" he shouted in a sudden outburst of bravado. "And you? You'd better not die either. Don't you dare!" His eyes were wide open now, and a smile played faintly about his lips.

"Not me! No, sir." Gasping for breath, crawling on his elbows and dragging his legs stiffly behind him, Matahachi inched his way toward his friend. He made a grab for Takezo's hand but only caught his small finger with his own. As childhood friends they'd often sealed promises with this gesture. He came closer and gripped the whole hand.

"I can't believe you're all right too! We must be the only survivors."

"Don't speak too soon. I haven't tried to get up yet."

The ground began to rumble like a caldron. Peeking through their arms, they watched the approaching whirlwind close in on them. Then they were nearer, lines of jet-black horsemen hurtling directly toward them.

"The bastards! They're back!" exclaimed Matahachi, raising his knee as if preparing for a sprint. Takezo seized his ankle, nearly breaking it, and yanked him to the ground.

In a moment the horses were flying past them--hundreds of muddy lethal hooves galloping in formation, riding roughshod over the fallen samurai. Battle cries on their lips, their armor and weapons clinking and clanking, the riders came on and on.

Matahachi lay on his stomach, eyes closed, hoping against hope they would not be trampled, but Takezo stared unblinkingly upward. The horses passed so close they could smell their sweat. Then it was over. --This text refers to an alternate kindle_edition edition.

Eiji Yoshikawa (1892-1962) was a Japanese historical novelist. Among his best-known novels, most are revisions of older classics. He was mainly influenced by classics such as The Tale of the Heike, Tale of Genji, Outlaws of the Marsh, and Romance of the Three Kingdoms, many of which he retold in his own style. He was awarded the Cultural Order of Merit in 1960, the Order of the Sacred Treasure, and the Mainichi Art Award just before his death from cancer in 1962. He is cited as one of the best historical novelists in Japan.