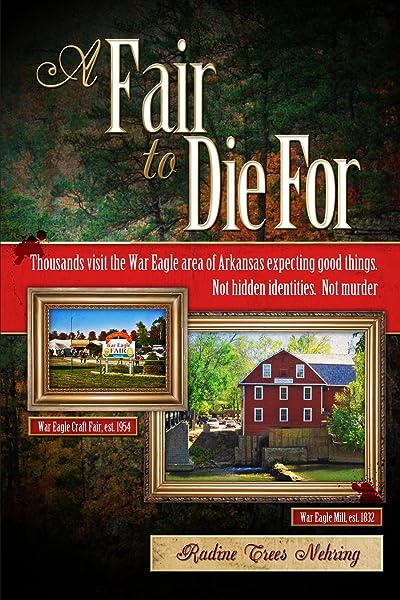 Music to Die for: The Second Something to Die for Mystery Paperback – October 1, 2003

...hooks [readers] with a story they cant put down. -- THE TULSA WORLD

A riveting story of kidnapping, murder, and family secrets that won't stay hidden. -- Barbara Brett, author of BETWEEN TWO ETERNITIES and, with Hy Brett, PROMISES TO KEEP

Highly recommended. -- I LOVE A MYSTERY

In this character-driven story, heroes have their values straight and fight for what they believe in. -- COZIES, CAPERS & CRIMES

Maybe murders can be bad news for tourism, but I was hooked...a compelling read. -- Joe David Rice, Arkansas Tourism Director

Radine Trees Nehring is an award-winning author and journalist who writes about unique people, places, and events in Arkansas, not only in her popular fiction and non-fiction books, but for radio news programs and magazine and newspaper features. Her Something to Die For Mystery novel series displays a broad knowledge of her favorite state and its most appealing residents, as well as her ability to weave a fascinating story.

Carrie retraced her path through the craft area toward the back door of the administration building. She'd started to pull the door open when a shouted "no" came through the small crack. What on earth? Was someone saying she couldn't come through this building now?

She was about to open the door farther to see who had shouted at her, but the hidden voice went on, obviously not speaking to her at all.

She stopped where she was, trying to decide what to do next, holding the heavy door open just enough so she could hear what was being said. If it was a private conversation, maybe she should knock or say hello before she went in.

A woman was talking. She wasn't crying, but Carrie could hear tears behind her words.

"No! He won't hurt her, Chase." A pause. "He loves her! I know him, and if we raise a fuss it'll only make things worse. He'll get stubborn and up the ante. Don't you see, if we just pay, he'll bring her right back. All he really wants is money. He'd never harm Dulcey."

A man's voice now, shaking, furious. "Oh, sure you know him, Tracy, you know him all right. But how do you know he's not on drugs? Does he still drink too much? And Dulcey is supposed to perform with us tonight. How're we gonna explain her being gone? I'm heading for his house right this minute. Y'all can go ahead and start the program without me. It's pretty obvious you don't give a..."

The woman screamed the word.

A lower, older woman's voice broke in, spreading like molasses over the echoing "No."

"Well, son, you know these folks are paying you to perform, so that's exactly what you're goin' to do. You'll fulfill your contract. Besides, Tracy's right, Farel'll be good to Dulcey, 'n' she's always enjoyed being with him."

Silence. Carrie shoved her knee against the crack in the door to help hold its weight. If she let the door shut now, they'd notice the click.

The male voice came again, and this time it was almost a whine. "Well, is this what you want us to do? You want us to sit and smile at the audience and say, 'Sorry, our daughter's been kidnapped by her mother's crook of a cousin and he wants a huge sum of money, so that's why our little star, Dulcey Mason, isn't with us tonight. We're so sorry.' Trace, you know he hates me. And it was your fault for letting her go out in Momma's yard alone. Anyone could have kidnapped her."

"Chase, Chase." It was the younger woman's voice, still sounding of tears...pleading. "It isn't really like kidnapping, and what else can we do? Farel's good with Dulcey; you know she's safe. Let's just pay him and get it over with. It's not that much money, not for us now. All we have to do is pay and he'll bring her back. He's desperate to have money to start over with. I told you, but you wouldn't listen, wouldn't loan him the money, and that's why he did this."

"Oh-h-h no, Trace, you can't fly that rooster in my coop! And, if ol' cousin Farel is so great, why's he want to leave the state in such a hurry anyway? Why the threats? On the phone he said if we didn't pay the ransom he'd take Dulcey far away. That sounds like a threat to me."

"He didn't mean it. For heaven's sake, Chase, go ahead and pay him. We don't want any police or publicity. You know that wouldn't be good for us, so what else is there to do?"

"Of course you're taking the side of your scummy relatives."

There was a gasp, then the older woman's voice.

"Now, now, son, there's no call for that. Of course it's worrisome, but we have a show to do and we're gonna do it. Let's go, we're mighty late already. We'll say Dulcey has a cold and we had to find a sitter. Come on. I don't see what else to do fer now. Besides, I bet Dulcey's having fun with Uncle Farel. She's purty independent, 'n' used to bein' with other folks when you two's out on the road."

Carrie heard movement and the scrape of a chair. She pulled back hurriedly, letting the door click shut, then opened it wide and stepped into the hall, releasing the door so it would slam behind her.

There was light coming from the room on the right. A man looked out. Chase Mason. She recognized him, of course.

"Well, h-hello there," Carrie said, thinking her voice sounded much too loud in the empty building. She swallowed, wondering if her halting words would give her away as an eavesdropper. But then, they were probably used to people being overwhelmed by their fame and would think that's what was causing her discomfort. She cleared her throat, spread her lips in a smile, and continued more steadily, "I'm your escort. The convention banquet is about to start. Shall we go eat?"

Gayle Rice
5.0 out of 5 stars Wonderful
Reviewed in the United States on December 8, 2012
Verified Purchase
Read all of this series I could get and would like more. Interesting and entertaining. Glad to have been introduced to a new author for me.
Read more
Helpful
Comment Report abuse

J. grant
5.0 out of 5 stars a good read
Reviewed in the United States on January 8, 2013
Verified Purchase
super interesting, can't put it down === love Carrie and her curiosity!!! If you like mysteries you will love this series!!
Read more
Helpful
Comment Report abuse

Amazon Customer
5.0 out of 5 stars a terrific Ozark cozy
Reviewed in the United States on January 20, 2005
As the Arkansas highway tourist information manager, widow Carrie McCrite attends the annual Department of Parks and Tourism Convention at The Ozark Folk Center State Park near Mountain View with several of her friends including her closest pal Henry King. Carrie especially looks forward to attending the craft classes that she signed up for and to attending the performances especially country and western stars Chase Mason and Tracy Teal, but dozes through the lectures.

However, instead of a weekend of relaxation mellowing in the remote local, all hell breaks lose. Someone abducts Farel, the four year old daughter of Chase and Tracy; however Carrie and Henry find the culprit dead and his house burned down in a deliberate fire. The child remains missing. As they work in tandem while their feelings for one another blossom Carrie and Henry desperately hope to save a little girl even at a risk to their own lives.

MUSIC TO DIE FOR is a terrific Ozark cozy that brings to life this region of the country. The mystery is cleverly designed so that the lead amateur sleuths and the audience seem to only find more questions and plenty of troubles, but no child. Henry is a delightful lead as his admiration and fondness for Carrie grow; she is an intriguing charter who when struggling asks the Lord for guidance. Fans of regional cozies will enjoy this tale and like this reviewer seek Radine Tree Nehring's first Ozark mystery, A VALLEY TO DIE FOR.