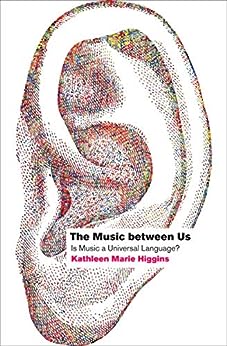 The Music between Us: Is Music a Universal Language? Kindle Edition

“The Music between Us approaches the question of music through a vast amount of recent and fascinating work that implicates, if not demonstrates, music’s central place in human nature: thought, feeling, synthesthesia, language, and community. It eschews claims of metaphysical essence or universals, instead speaking to deep and normative aspects of the musical in human life and behavior. Assembling an extraordinary amount of data and result from cognitive psychology, anthropology, linguistics, neuroscience, ethnomusicology, and sociology, Kathleen Higgins’s book is worth reading purely for its compendium effect.”--Daniel Herwitz, author of Aesthetics
-- Daniel Herwitz Published On: 2011-10-18

“The Music between Us is attractive and important not only because its philosophical arguments encompass music from all around the world and are informed by recent data from the sciences but above all for its warm, humanist perspective on the centrality and universality of music in human life. Kathleen Higgins' fascinating account considers music in relation to language, cross-cultural communication, and the emotional responses it calls forth, including how it anchors individuals to their world and serves as a balm to social discord. Here is a refreshing alternative to the narrow formalism that is so common in music aesthetics. A must read for anyone who has been intrigued by the way music beguiles us.”--Stephen Davies, author of Musical Understandings
-- Stephen Davies Published On: 2011-11-28

“A significant contribution to the burgeoning field of philosophy of music. With uncommon scholarly breadth and sensitivity, The Music between Us explores the age-old comparison between music and language—two of the most powerful and enduringly mysterious manifestations of human intelligence—turning the comparison inside out like a reversible raincoat, and showing how music can support both cultural diversity and cross-cultural appreciation of our essential humanity.”--Joel Rudinow, author of Soul Music
-- Joel Rudinow Published On: 2011-12-13

“Kathleen Marie Higgins’ The Music between Us provides a masterful, big-picture look at the concept of universals in music. In this eloquently written book, Higgins bridges musical aesthetics, ethnomusicology, and psychology as she urges us to listen outside our culture, and to share the ongoingness of life by participating in something larger than ourselves. Synthesizing significant research from numerous disciplines, and displaying musical examples from across the globe, The Music between Us indeed helps us know ourselves as joyous ‘musical animals.’”
-- Jennifer Judkins, UCLA Herb Alpert School of Music Published On: 2012-03-30

“The Music between Us is an intellectual tour de force. While anti-essentialist views of art and culture have revealed many new insights about the diversity of human experience and values, Kathleen Higgins reminds us that an emphasis on differences can lose sight of our mutual humanity. In lucid prose, she explores the significance of our musicality and the range of ways that music can bridge our differences.  I learned something new on almost every page.”
-- Theodore Gracyk, co-editor of The Routledge Companion to Philosophy and Music Published On: 2012-03-30

“Higgins has written a wonderfully comprehensive book about nothing less than to what extent music is a universal phenomenon….The author contends that though there appears to be dramatic variation across cultures, music universally reflects humans’ common ways of behaving—for instance, in connection with longing and mourning—and serves to physically instruct one on how to comport oneself in society. Higgins’ love of music and cultural variety is evident throughout. She writes in a relaxed, accessible, sophisticated style that makes the book useful to both inexperienced readers and specialists…. A welcome contribution to cross-cultural (and cross-species) philosophy of music….Highly recommended.”
-- P. Jenkins ― Choice

“Higgins acts as a generous, perspicacious guide through this complex interdisciplinary field of theories both illuminating and reactionary.”
― Times Higher Education

“Of late, a fair bit of musical aesthetics has been afflicted by cleverness. Higgins’s work, I am delighted to say, is not of this kind. Those who, like Higgins, deeply love music, actually know something about it, have open minds and ears, and are willing to look beyond the confines of Western aesthetics (incidentally not the indigenous aesthetics of the overwhelming majority of the world’s seven billion plus people) will find much to learn in The Music between Us. For showing us that there is a rich world out there beyond Western music, we should all be grateful to Higgins.”
-- Saam Trivedi ― Journal of Aesthetics and Art Criticism

“Though it takes the question of musical universality as its subtitle, The Music between Us does not really set out to answer it, at least not in the conventional sense. As Higgins’s brief summaries of prior discussions of music’s universality make clear, people have been so busy answering the question that they failed to really ask it; as a philosopher, Higgins sets out to do precisely that. She interrogates the terms of the question and turns it on its head in order to get at her primary goal, to argue that music can be a means to recognize and experience common humanity, even across divides.”
― MAKE --This text refers to the hardcover edition.

Kathleen Marie Higgins is professor of philosophy at the University of Texas at Austin. She is the author of The Music of Our Lives and Nietzsche’s “Zarathustra.”

William H. DuBay
5.0 out of 5 stars Why we love music and love life
Reviewed in the United States on February 7, 2013
Kathleen Marie Higgins, professor of philosophy at University of Texas, wants us to learn how to appreciate the music of other cultures as a bond expressing our common humanity.

That is not always easy. We may never get out of other people's music everything that they do. What Higgins does very well is dig out the underlying human capacity for music. She agrees with famous ethnomusicologist Charles Seeger who wrote: "Music, though not a universal language, is without question more nearly universal in all senses of the word, including world-wide perspective, than speech."

In her chapter on "The Music of Animals," she argues that animals really do create music and really do enjoy it. She says all the efforts of a male bird to attract a female with his beautiful song would be useless if she did not enjoy it. I was surprised to learn that many animals besides whales and birds sing, even rats.

Higgins spends most of the rest of the book talking about the function of music in our lives. In her chapter, "What's Involved in Sounding Human?" she makes the main point of her book that we enjoy music because it resembles so closely the physical activities of our bodies. This feature may be the cause of why our bodies resonate so well with music, causing us to sway, dance, march, and tap our feet. Even very small children move to the rhythm of music.

She often refers to the work of Oliver Sachs, whose brain-damaged patients were able to speak and think only by singing. I was surprised she did not take up Sachs' suggestion that music may be the language of the brain. Even the most common motions, like rubbing your hands or walking requires a cascading volume of nerve firings that ever so fluidly coordinate thousands of muscle fibers. It reminds us of nothing so much as someone conducting a great symphony orchestra. It may be that music not only mimics physical activity but causes it. Someday, I think, they may find that the genes in our DNA not only have the codes for building our bodies but also the scores for how they move.

Higgins is not comfortable with the idea that music is a language. She says it may be the other way around. In "The Music of Language," she points our the many musical facets of language, tone, inflection, rhythm, etc., and writes that learning language depends on our musical capabilities. Music gives us much more direct access to our emotions and reveals elements of thought that cannot be expressed in language. She argues that learning more about music will teach us a lot about language.

In "Musical Synesthesia," Higgins shows us how music affects different senses besides hearing. We hear with our whole bodies. She points out that hearing is our most acute sense and the most efficient in keeping us in touch with our environment. It can detect the presence of an agent in a few microseconds, several thousand times than than our eyes. The nerve trunks from the muscles all pass through the ear. In this way, the ear governs not only our posture, gait, and stride, but also the orientation of our body parts to one another and to the outside world.

I was surprised that she did not refer to the recent findings about mirror neurons, which enable us and other animals to know what others are thinking and feeling by observing their actions. In Western cultures, audiences are often sit passively during performances. This is why watching the conductors, musicians, singers, and dancers perform adds so greatly to our pleasure.

Her best chapters are on how music affects the emotions, especially joy. In the chapter "A Song in Your Heart," she quotes the ancient Chinese philosopher Xunzi who claimed, "Music is joy." This was not just his own opinion. He was pointing out that the Chinese character for joy and music are the same.

In "Comfort and Joy," she explains shows how music gives us the feelings of being at home in the universe and with our own kind. Many studies show us how hearing and musical capacities of infants enable them to establish the identity of their caregivers and of themselves. Music also joins us strongly with members of our own kind (for better or worse, she points out) and gives us the feeling of not being alone.

Higgins is a careful writer and scholar, clear in presenting her own opinions and those who would disagree. Nearly a third of the book is dedicated to footnotes. She is not always easy to read, but her book is entirely worth the effort.