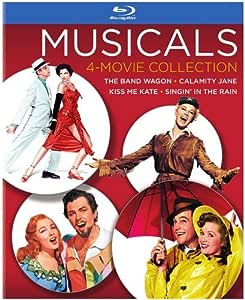 Various (Actor, Director) Rated:
NR
Format: Blu-ray
4.6 out of 5 stars 89 ratings
Available at a lower price from other sellers that may not offer free Prime shipping.

Silent movies are giving way to talking pictures – and a hoofer-turnedmatinee idol (Gene Kelly) is caught in that bumpy transition, as are his buddy (Donald O’Connor), prospective ladylove (Debbie Reynolds) and shrewish costar (Jean Hagen). The musical masterwork Singin’ in the Rain is celebrated with special features that salute not just this all-time favorite but also the musical legacy of its producer, songwriter Arthur Freed.

4.6 out of 5 stars
4.6 out of 5
89 global ratings
How are ratings calculated?
To calculate the overall star rating and percentage breakdown by star, we don’t use a simple average. Instead, our system considers things like how recent a review is and if the reviewer bought the item on Amazon. It also analyzes reviews to verify trustworthiness.

Ronald E. Weber
5.0 out of 5 stars DAZZERS
Reviewed in the United States on May 15, 2017
Verified Purchase
I avoided re-buying things I already had on dvd and laser, just to get the improved resolution of blu ray, but finally gave in to the temptation now that this lower price came into effect. The updates were warranted. All of the films look and sound wildly better, A great package of terrific material. It still galls me that they put SINGIN' IN THE RAIN in there, because any true member of the target audience for this collection already bought that on blu ray, instantly, when it appeared a couple of years ago. So, that means I have two blu rays of that title. Other than that, this is great. I don't approve of the packaging, though. There sleeves bound together (like the Kubrick and Laurel and Hardy sets) is awkward and cheap. It is impossible to remove a disc from them without getting fingerprints all over the playing surface. Therefore, I put the new discs into their old dvd albums. But KISS ME KATE and THE BAND WAGON are gorgeous.
Read more
10 people found this helpful
Helpful
Comment Report abuse

E. Hunter Hale
5.0 out of 5 stars KISS ME KATE IN 3-D & THREE OTHER GREAT MUSICALS!
Reviewed in the United States on February 6, 2017
Verified Purchase
I already had the Blu-ray of SINGIN' IN THE RAIN (which is nothing short of stunning) and a DVD version of THE BAND WAGON and KISS ME KATE (a full frame 1.33:1 copy) but decided to purchase the Blu-ray Musical Collection because I wanted the 3-D version of KISS ME KATE in it's wide screen format. Buy the four disc set was only half again as much as purchasing a single disc version of KISS ME KATE. THE BAND WAGON is stunning in Blu-ray and CALAMITY JANE is a lot of fun. The 3-D of KISS ME KATE is likely to best of any film done during the 1953-54 3-D heyday and it was the one 3-D film which wasn't screened theatrically in my town when originally released. Well Hitchcock's DIAL M FOR MURDER didn't get a 3-D showing either but it returned several years later in 3-D. KISS ME KATE uses 3-D in a very creative way that truly enhances the enjoyment of the film. Also the sound was recorded on three track magnetic and is marvelous to hear. The voices (songs) come from the front center and the music uses two tracks that give the effect of coming from the orchestra pit.
Read more
6 people found this helpful
Helpful
Comment Report abuse

Jan P.
5.0 out of 5 stars Worth buying even if you already have the DVD version
Reviewed in the United States on March 22, 2015
Verified Purchase
I already had DVDs of “The Band Wagon,” “Kiss Me Kate,” and “Calamity Jane,” but I took a chance on this purchase because I had read that the colors had been upgraded. This collection is worth it. Some people have been unhappy with the packaging, but I didn't find that to be a problem. The colors on the three I already had are so much more brilliant; it's worth the purchase price just for the difference in the visuals for” Calamity Jane” alone.

My TV and Blu-ray player are not 3D, and I had a little difficulty at first accessing the 2D version of “Kiss Me Kate.” But I posted my question here on amazon and got the information I needed. I had been watching something else, and even though I changed the Input from DVD player to Satellite and back again, the only message that came up was that it "could not read this disc." After I had completely turned off everything, though, I gave it another try and the message came up that I did not have 3D capabilities and to push the OK button for the 2D version. I don't know why I didn't get that message before, but it's working now. So if anyone else is having trouble accessing the 2D version, I suggest turning off everything and trying again.

I haven't watched “The Band Wagon” or “Singin' in the Rain” all the way through yet; but I played a little just to see what they looked like, and they both look great. The colors on “Calamity Jane” and “Kiss Me Kate” were terrific. If you love these old musicals the way I do, I recommend this collection very highly--and you can't beat the price per disc at only $7 or so.
Read more
5 people found this helpful
Helpful
Comment Report abuse

Mark E. Stenroos
5.0 out of 5 stars A Beautifully Produced Set
Reviewed in the United States on March 5, 2015
Verified Purchase
Wow! I received this set on March 3 from amazon and was immediately impressed with the packaging and production values.

First off - both the 2D and the 3D versions of "Kiss Me Kate" are included. I didn't even realize that was the case when I ordered this set.

Second - the packaging is really well done. There's a heavy paper case with each BluRay housed in a separate sleeve, much like the Universal Monsters or the Complete Star Wars Collections, except that the discs are easier to remove from this packaging. That case is housed in a sturdy slip case, so the discs are going to be well protected over the years. There are also 4 lobby cards included - one from each film. These are oversized and do not fit inside the BluRay packaging, which I consider a bit of a bummer as I think it would have been nice if the cards were housed inside with the discs. Hey - at least they included the lobby cards!

BTW - for those who complain about the packaging and the fact that you may need to grab the discs' playing side with your fingers to get them out, there are a few workarounds: 1. buy a box of eyeglass lens cleaner wipes and place one between your fingers as you grab the disc, or 2. you can simply shake the packaging gently, allowing the disc to make its way out of the sleeve. I found the discs very easy to remove from the packaging.

Further BTW - all 4 films are available separately on BluRay in plastic clamshell packaging. That's a more expensive way to buy them, and you don't get the lobby cards, but if you want your discs on plastic spindles, that's the only option available.

Third - as to the movie transfers, I have so far viewed all but "Annie Get Your Gun," and the image and sound are really good in the three films I've watched, thought KMK has a high level of grain. The video & audio improvement in the films themselves are especially noticeable when set against viewing the included extra features which were done for the DVD release - the DVD images don't have the clarity of the BluRay images, and I don't think any time or $ was spent upgrading these produced-for-DVD features for hi-def.

SJT
5.0 out of 5 stars Like ALL Warner US blu ray product
Reviewed in the United Kingdom on October 12, 2016
Verified Purchase
Just a word, to advise anybody interested that despite Amazon's double-blazoned warning that this set is Region A locked and therefore only playable in the US or on a chipped machine, it isn't. Like ALL Warner US blu ray product, it's region-free.
Read more
55 people found this helpful
Report abuse