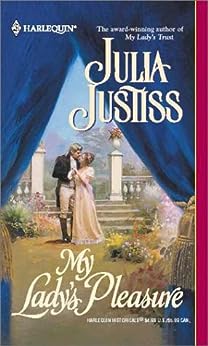 In this engrossing but sometimes patchily plotted Regency-era romance from Justiss (My Lady's Trust), a sheep-farming widow and a world-weary gamester dodge society's rules for a chance at love. Lady Valeria Arnold, hurt by her husband's calling out another woman's name upon his deathbed, and Teagan Fitzwilliams, hardened by years of scorn from his aristocratic family, find their lives overturned upon a chance meeting in Valeria's barn, where Valeria allows Teagan to seduce her. The more decorous setting of a London ball sets the stage for their next encounter, but Teagan knows that by even speaking a few words to her, he may stain her reputation. Valeria refuses to accept his decision to avoid her, so they decide to be merely well-chaperoned friends whose simmering attraction deepens into love. But when Valeria gains an inheritance and a higher social standing, she is catapulted beyond Teagan's reach unless he can find a way to repair his reputation. Though Justiss easily convinces readers of the impermeability of class, the resolution of the lovers' conflict relies too heavily on out-of-the-blue relatives and letters from beyond the grave, robbing the hero and heroine of the chance to shape their own destinies. Still, the tension between the couple crackles, bonding them on several convincing levels.
Copyright 2002 Cahners Business Information, Inc. --This text refers to an out of print or unavailable edition of this title.

B. D. Mann
3.0 out of 5 stars Only One Major Flaw
Reviewed in the United States on June 26, 2010
Verified Purchase
I absolutely loved it. Great, well developed characters and a believable story line. I always love well written stories where deserving characters triumph over adversity against all odds. Ms. Justiss does this with both the hero and heroine and she does it in a totally believable way - the exception noted below. Until the final scene Ms. Justiss had deservedly earned a full four stars for this work - it would have been five stars but for the unnecessary depiction of graphic sex.

The final scene, however, blew it for me. All through the book Sir William was shown to be an honorable, moral, kind, and agreeable person. He was totally supportive of Valeria from the beginning. Believably, he showed interest in her at the beginning simply because of his friendship with Lady Winterdale. But as the novel progresses he sees Valeria for whom she really is and gradually develops honest feelings for her. In addition, he defends Teagan as being an honorable man when the bulk of society condemns him. Sir William patiently waits for Valeria as she works through her issues and finally, courageously approaches her to propose marriage. Though he is rebuffed, he kindly and patiently defers to Valeria's request to wait a while longer. Everything about Sir William is positive. His only fault is that Valeria is actually in love with Teagan, consequently there is no sizzle between Valeria and Sir William. All in all, Sir William could be an outstanding candidate as a hero in another story by revealing a little more heroic depth to his character.

All that said, Ms. Justiss elects to have this honorable man unjustly roughed up, tied up, and sent on his way by Teagan and his associates when all he was doing was escorting Valeria on a visit to Sir Williams' parents. This is simply not consistent with the just and honorable man Teagan has been demonstrated to be. Teagan, of all people, understands being unjustly handled. How much better it would have been had Ms. Justiss amended her story at the point where the coach door is flung open. Then, as Teagan removes Valeria from the coach, he displays honor and respect to both Valeria and Sir William as he pleads his undying love for Valeria and his apologies to Sir William before he allows Sir William to depart. The end result would be the same and Ms. Justiss would have been consistent with the character of Teagan. Sir William would then have been dealt with honorably and respectfully as his character deserved.

Sorry, Ms. Justiss, but that final scene blew it for you. Three stars only.

Ann Aguirre
5.0 out of 5 stars Pretty much the perfect book
Reviewed in the United States on October 26, 2010
Verified Purchase
If you love unconventional heroines and misunderstood bad boys, this book is for you.

Valeria is a strong, self-sufficient widow. She lost her husband to a fever before their love could flower, and now she lives on a farm in the middle of nowhere, struggling to make ends meet. She's never known much pleasure, but she is determined to make her own way, and let nobody rule her life.

Teagan is a rogue, who has been forced to make his living at the tables after his mother's family cut them off because of her impetuous marriage to her father's Irish groom. He's outwardly beautiful, an untouchable harlequin figure who prowls around the perimeter of the ton, relieving shallow fribbles of their coins. Deep down, however, he's wounded and broken because no one has ever given him anything without expecting something in return. You will lose your heart to him, utterly. He's one of my top ten heroes, no question, up with those by Laura Kinsale and Loretta Chase.

And from their first meeting, Valeria and Teagan are beautiful together.

It's well-written, intense, and heart-wrenching. I recommend you grab this book on Kindle, download, and see for yourself.
Read more
2 people found this helpful
Helpful
Report abuse

Hana Ogi
5.0 out of 5 stars My Lady's Pleasure
Reviewed in the United States on March 9, 2016
Verified Purchase
Another great book by Ms. Justiss! Didn't want to put the book down! !Ms. Justiss is such an amazing author! I enjoy her works so much!
Read more
Helpful
Report abuse

Susan Beamon
5.0 out of 5 stars Another good story
Reviewed in the United States on May 7, 2018
I like Regency romances best of all romance sub-genres. This one is a good example of the style. It had just the right amount of spice and angst. I especially liked the way the hero second guessed himself and his motives until he could find the truth of his family's past.
I won my copy of this book through a Fresh Fiction contest with the author.
Read more
Helpful
Report abuse

Stephen
5.0 out of 5 stars It sizzles!
Reviewed in the United States on July 7, 2002
My Lady's Pleasure sizzles from the very first scene, with chemistry galore between the hero and heroine. Like all of Julia Justiss's heroes, Teagan Fitzwilliams is strong, sexy, and larger than life. By the middle of the book, you will not only be in love with him, your heart will ache for him, and you won't be able to put down the book until you know he has overcome his lot in life. The heroine, Valeria Arnold, is sensible and compassionate, and I thoroughly enjoyed following her through the pages. Julia Justiss is always a "must buy" on my list!
Read more
5 people found this helpful
Helpful
Report abuse
See all reviews
Back to top
Get to Know Us
Make Money with Us
Amazon Payment Products
Let Us Help You
EnglishChoose a language for shopping. United StatesChoose a country/region for shopping.
© 1996-2021, Amazon.com, Inc. or its affiliates