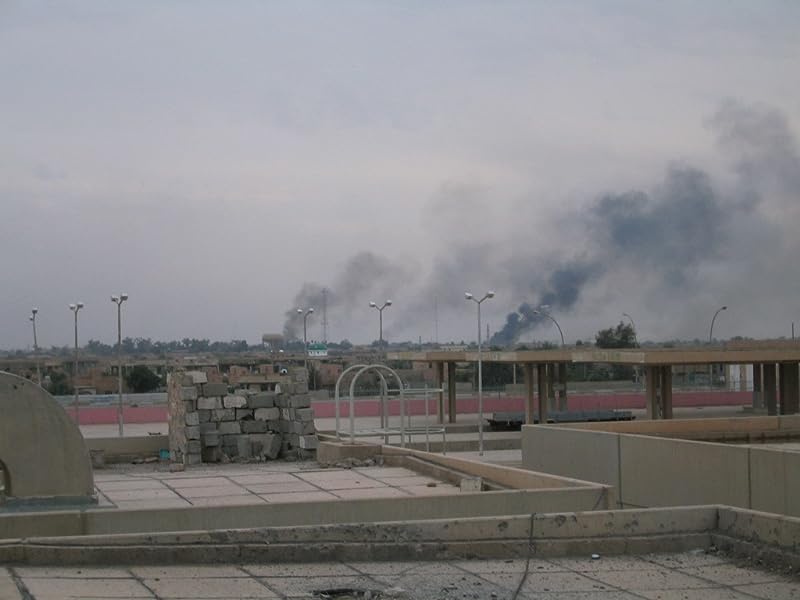 This is the first paperback edition of the riveting story of legendary U.S. Marine First Sergeant Brad Kasal. It is a page-turning account of Kasal's courageous mission to rescue fallen comrades while under intense enemy fire during the Battle of Fallujah. At a house in a walled neighborhood, Kasal and his squad became involved in a close-quarter, two hour duel with fanatical Chechen fighters. During the fight, Kasal was shot seven times, almost losing his leg, and sustained 47shrapnel wounds using his body to shield a wounded Marine from an enemy grenade. Because of his actions in the skirmish, Kasal was awarded the Navy Cross, the nation's second highest award for heroism. The book is a new addition to the Leatherneck Classics Series.

Nathaniel R. Helms is a Vietnam veteran and former police officer, who lives in St. Charles, MO. He is the author of My Men Are My Heroes: The Brad Kasal Story selected in 2012 for the USMC Commandant's "Recommended Reading List" and as a "Marine Corps Legend" book by the Marine Corps League.

Start reading My Men are My Heroes on your Kindle in under a minute.

4.7 out of 5 stars
4.7 out of 5
203 global ratings
How are ratings calculated?
To calculate the overall star rating and percentage breakdown by star, we don’t use a simple average. Instead, our system considers things like how recent a review is and if the reviewer bought the item on Amazon. It also analyzes reviews to verify trustworthiness.
Top reviews

Floating Apex
5.0 out of 5 stars Cannot adequately describe what one will learn about the Marines..
Reviewed in the United States on May 26, 2018
Verified Purchase
,,, and the other services. This book is a biography of an extraordinary leader, but an additional lesson is provided about the extraordinary men he led and served. I sugest reading "House to House" by Bellavia., along with is book, to better understand the Second Battle of Fallujah.
Read more
3 people found this helpful
Helpful
Comment Report abuse

Robert
3.0 out of 5 stars A book that needs to be read
Reviewed in the United States on December 15, 2012
Verified Purchase
This is one of those books that manages to succeed despite its failings. The story this book has to tell is one everyone should hear. Yes, the book’s poor execution detracts from the readability of the book, but I would encourage you to slog through the antiseptic prose and lack of personality to reach the important underlying story. Understand that this book isn’t as much about Brad Kasal as it is about his men. The title of the books is My Men Are My Heroes. It is not I Am My Own Hero. If you can remember that as you read the book, the book starts to make a little more sense to you and becomes more readable.

Kasal’s story is one that reminds us of those things that are truly important in life. This book does not focus as much on the actions in which Kasal took part, but more on the life beyond those actions -- both before and after. Sitting comfortably on our couches at home, it is easy to forget that the time a Marine spends at war is quite limited compared to the number of years in which he lives outside of the war. Yet that time becomes a defining moment for these men that inevitably affects every aspect of their life and the lives of those who interact with them. And that is where this book succeeds.

This book does a good job of helping the reader better understand the Marine as a whole. This book takes you from the young man who dreams of becoming a Marine to the battle tested warrior and beyond. It gives a fuller picture of the Marine and his mindset. And that mindset isn’t an egocentric “it’s all about me” mindset. Again, reference the title of the book.

Take the time to read this book and consider what Kasal’s story is really about. This isn’t a war story so much as it is a life story. Of course when you’re a battle tested warrior, I suppose it is safe to say that your life story is indeed a story of war and its far reaching affects on your life. That my not be a war story in the classic sense, but it is still a story of war nevertheless.

EclecticReader
5.0 out of 5 stars Great Read
Reviewed in the United States on November 15, 2019
Verified Purchase
This is a book that should be required reading for all Marine NCO’S. It proves that the best leaders are not the ones who have to scream and belittle. True leaders share every experience with their people.
Read more
Helpful
Comment Report abuse

S. Reeder
5.0 out of 5 stars Leadership in action
Reviewed in the United States on June 10, 2018
Verified Purchase
Mr. KASAL'S story is an interesting look at what a true leader is and should be. As former military I have seen good and bad leaders and the good ones invariably were the ones who lead by example and lead from the front with concern for their men and women's welfare and understanding that hard training is necessary to keeping these people alive. I can only pray that future leaders get a chance to read this book and learn it's lessons.
Read more
One person found this helpful
Helpful
Comment Report abuse

M. Byrne
3.0 out of 5 stars ok book.
Reviewed in the United States on June 8, 2009
Verified Purchase
The book satisfies those who want to know the story behind the picture. It's not particularly well written (it is somewhat disjointed), but I think the author did a decent job with what he had to work with. We don't really get to hear the details about Brad Kasal that make him a real character and I suspect that is because he is still in the Marine Corps and doesnt want to let his book confirm the Marine reputation for being the hell raisers most of us already know they are. The author seems to skirt around this and tell us, "you get the point, right?"

I found some of the descriptions of the battle particularly interesting, like Psyops blasting AC/DC. The recovery aspect was touching and though I felt the author held back, there was still truth in his words. I give this book three three stars because it was an enlightening story about a battle we dont hear much about, and a glimpse into the life of one of the toughest men in America, but I felt that much of what could have been said was left out.

Kyle Kmann
5.0 out of 5 stars Great for EVERYONE
Reviewed in the United States on April 19, 2012
Verified Purchase
Marine, civilian, or anyone else. This book was written for people who aren't all that familiar with the military lifestyle. It's basically a journey through Brad Kasal's Marine Corps career. As a Marine myself, I almost read it all in one sitting. It had me nodding and smiling. It also had me inspired, and on the edge of my seat at times. There are a some good pictures inside which help out a lot. Some are gruesome. Like I said, this is a great book for anyone who wants a REAL good accurate look into the Marine Corps, it's more personal and intimate than it is political. Which I like. This book explains to people why we love the Marine Corps, while at the same time not necessarily agreeing with our government. One of my favorite books ever. And I'm one of those dudes who never reads.
Read more
3 people found this helpful
Helpful
Comment Report abuse
See all reviews

gary.
5.0 out of 5 stars one heck of a book.
Reviewed in the United Kingdom on March 29, 2016
Verified Purchase
this is one heck of a book. feels like you are with them in the battle very hard to put down once you start to read the book.
Read more
Report abuse

Elisa&Sandro
5.0 out of 5 stars Compelling war story
Reviewed in the United Kingdom on November 24, 2013
Verified Purchase
This book tells the story of one of the most problematic engagements the US military found itself in. Brad Kasal is a real hero and this book is an excellent read.
Read more
One person found this helpful
Report abuse

Abhijit Banerjee
5.0 out of 5 stars Five Stars
Reviewed in Canada on June 4, 2018
Verified Purchase
"So much is owed by the many to the few"..........
Read more
Report abuse
See all reviews

Page 1 of 1 Start overPage 1 of 1
This shopping feature will continue to load items when the Enter key is pressed. In order to navigate out of this carousel please use your heading shortcut key to navigate to the next or previous heading.
Back
Next
Pages with related products. See and discover other items: music major, naval institute press books