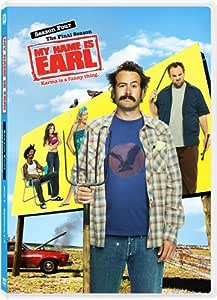 My Name is Earl: Season 4

Karma should be a four-letter word. Just ask Earl, the lovable loser with a hilarious laundry list of dirty deeds that need undoing, from stealing a childrens bookmobile to getting his babysitter pregnant the hard way! And, while Earls brother Randy starts a karmic list of his own, his ex-wife, Joy, and her new husband are movin on up to the suburbs. Trouble is, you can take the girl out of the trailer park, but you cant take the trailer park out of the girl. Hilariously irreverent and outrageously over-the-top, My Name is Earl Season Four proves, once again, that karma is a funny thing.

Stills from My Name is Earl: Season Four (Click for larger image)

4.8 out of 5 stars
4.8 out of 5
715 global ratings
How are ratings calculated?
To calculate the overall star rating and percentage breakdown by star, we don’t use a simple average. Instead, our system considers things like how recent a review is and if the reviewer bought the item on Amazon. It also analyzes reviews to verify trustworthiness.

My Name is Earl (2005-2009) begins with the protagonist deciding to atone for all of his past misdeeds. He makes a list and attempts to rectify all of the bad things he did to people during his misspent life. The series starts strong, there is a clear goal, but while attempting to right his past wrongs, often in very peculiar ways, the protagonist adds more crimes to his list than he’s able to work off. After four seasons the series ends without the protagonist finishing his list. It's a failed mission. I started losing interest long before the series ended. By season four they had completely given up on the list. It was forgotten. The series was about nothing in the final season and ends with a "To be continued" in the middle of an episode that had nothing to do with the list or the protagonist's first season goal.

Too often I felt like I was watching the same episode over and over. In too many episodes you literally watch the same scene over and over. I’m not a fan of ground hog day type scenes, shows, movies, or flashbacks, etc. The constant use of narration to tell the story didn’t work for me either. Highlights of the show were the guest actors like Beau Bridges, Timothy Olyphant, Danny Glover, Ricardo Rivera, and Betty White. The turtle episode ended with a giant close up of a turtle saying, “Relax. No turtles were harmed during the making of this show. So please, no letters, Crackpots.” That was funny.

BUTTERFLY50
5.0 out of 5 stars DRY GOOFY ACTS AND JOY's voice with that gum chewing...
Reviewed in the United States on September 3, 2013
Verified Purchase
This is just a funny show..I started watching this show while in theater/down range in the military waiting for a plane to take us back to Camp Phoenix from Bagram 2010/2011 a twelve month loooong tour in Afghanistan....it was just playing and I could not stop watching it...the soldiers who were in the waiting area where I were trying to watch the NBA FINALS , unfortunately, they could not because everyone was too busy laughing at 'MY NAME IS EARL'...this show is so dry stupid, it is just funny...and the crab man that is married to joy, OMGOODNESS!!! joy is a hoot...she makes the show...however, everyone compliment everyone else...this is what makes the show so hilarious...watch the last season, you will be rolling...my most funniest episode is when Betty White is playing an evil witch and her daughter is a prostitute...that front lase wig is gorgeous...and when joy git fungus from a homeless man sleeping in a hot tub...OMGOODNESS, you will be laughing so hard you may throw up..look at her big a$$ toe...lol....
Read more
5 people found this helpful
Helpful
Report abuse

The Professor
5.0 out of 5 stars Continue the Laughter
Reviewed in the United States on January 19, 2020
Verified Purchase
Loved this series when it was on TV. Getting continue that enjoyment and laughter while watching the DVDs.
Read more
One person found this helpful
Helpful
Report abuse

Lydia
5.0 out of 5 stars Collection Complete :)
Reviewed in the United States on October 31, 2018
Verified Purchase
This season completed my collection. I've been a fan of the show for many years, and now I have all four hilarious seasons. It's too bad that the show was cancelled and there are only four seasons.
Read more
One person found this helpful
Helpful
Report abuse

Thomas H.
5.0 out of 5 stars Must Watch
Reviewed in the United States on February 11, 2018
Verified Purchase
Fanboy rating 5/5.

I love My Name is Earl. Bought all 4 seasons when Netflix decided to remove it.
Read more
3 people found this helpful
Helpful
Report abuse

writerjb
4.0 out of 5 stars Lots of Laughs !
Reviewed in the United States on December 9, 2017
Verified Purchase
This is a very funny show. Wouldn't recommend it for young children or teens, but it's great for adults. Everyone I've told about the show watched and loved it. Clever dialogue, great cast and acting, and seriously crazy plots. I didn't want the series to end.
Read more
Helpful
Report abuse

Neil
5.0 out of 5 stars This is a great series
Reviewed in the United States on July 22, 2020
Verified Purchase
Just the best show, I can watch it over and over again.
Read more
Helpful
Report abuse

S. Szabo
4.0 out of 5 stars Bad Karma for NBC
Reviewed in the United States on December 15, 2011
Verified Purchase
If NBC doesn't believe in Karma it should.
Earl did slide in Season 3 but got back to its roots in 4.
And it deserved another season. And should have gotten one.
But it was taken off and, inexplictably, didn't find another home.
Cast off and abadoned, Karma has come to roost at NBC.
Like the Red Sox when they traded away Babe Ruth, NBC has gone to the bottom.
Do good things and good things will happen.
Do bad things and bad things will happen.
NBC won't find it's Karma. it's on Fox with Raising Hope.
Read more
5 people found this helpful
Helpful
Report abuse
See all reviews

TurboRay
4.0 out of 5 stars Any now the end is near!
Reviewed in the United Kingdom on December 11, 2018
Verified Purchase
My Name is Earl came to an end, and obviously they weren't expecting it! The production value really went up a gear in the 4th and final season! I enjoyed 3/4 of the episodes, but some were a little week and i hated the Inside Probe double episode! Well worth watching if you're a fan!
Read more
Report abuse

susan harrington
1.0 out of 5 stars Review
Reviewed in the United Kingdom on October 29, 2020
Verified Purchase
First DVD is missing. Other discs are all squashed into the one box
Read more
Report abuse

C. J. Greaves
5.0 out of 5 stars Love it
Reviewed in the United Kingdom on July 1, 2018
Verified Purchase
I love it
Read more
Report abuse
See all reviews