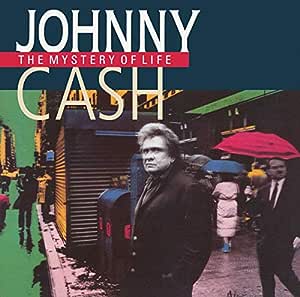 The Mystery Of Life [LP]

Includes FREE MP3 version of this album.
Provided by Amazon Digital Services LLC. Terms and Conditions. Does not apply to gift orders.
Complete your purchase to save the MP3 version to your Amazon Music Library on its release date.

The Mystery of Life is the 77th album by Johnny Cash, released in 1991, and his last for Mercury Records. The songs featured are culled from both recent sessions and from leftovers from Cash's first Mercury session in 1986 for the album Johnny Cash is Coming to Town.It includes new recordings of two songs already associated with him from his Sun and Columbia days, "Hey Porter" and "Wanted Man". "I'll Go Somewhere and Sing My Songs Again" is a duet with Tom T. Hall. Pressed on 180-gram vinyl.

4.9 out of 5 stars
4.9 out of 5
16 customer ratings
How does Amazon calculate star ratings?
Amazon calculates a product’s star ratings based on a machine learned model instead of a raw data average. The model takes into account factors including the age of a rating, whether the ratings are from verified purchasers, and factors that establish reviewer trustworthiness.
Top Reviews

leahtard
5.0 out of 5 stars Sounds New
Reviewed in the United States on June 13, 2017
Format: Audio CDVerified Purchase
It was a gift for my mother and she loved it. I bought it used and it sounds new. no skips or scratches
Read more
Helpful
Comment Report abuse

Barbara sears
5.0 out of 5 stars Includes one of his greatest songs I never heard!
Reviewed in the United States on April 30, 2019
Format: Audio CDVerified Purchase
The song “Goin By the Book” is new to me and man, what a great song!!!
Read more
Helpful
Comment Report abuse

The Procrastinator
4.0 out of 5 stars 3 stars for non cash fans maybe
Reviewed in the United States on April 28, 2003
Format: Audio CD
For those of you who bought rockabilly blues or another reissue from that time like it and weren't satisfied, I'd say this is much different. The remakes of Hey porter and Wanted man are great and the guitar is pretty fitting. Kickin' but rough like Cash's voice on here. Goin' by the book is an honest to God Rock song. And it is a good one that Cash sings naturally. A song about apocolypse kind of stuff that seems pretty familiar these days. Beans for Breakfast is probably one of the funniest songs Cash ever did to the contrast of goin by the book and is mentioned in the liner notes written by June Carter Cash. This song is tough to explain but imagine a song about a man who- on second thought nevermind. I wouldn't do it justice. Just say that it is hysterical and absurd- a new favorite of mine. There is a duet with Tom T. Hall here on one of his songs. In my opinion everything clicks and the U2 session was really not bad but didn't really click with the album itself. I only heard it once but I don't recall it being a duet so much as a u2 backs cash session and u2's crew produces it. Easy Rider and the Mystery of Life I think would be enjoyable to all of his fans. This in my opinion clicks way better than Rockabilly blues and is now one that I consider to be a classic. I love the album. Hell, I love anything Wanted man is on. The sound quality by the way is GREAT. Crisp, clear, bright sounding music. This is good, particulary after a few listens. Maybe every single song won't be memorable to you, but this is not a slouch record with one or two good ones like so many albums are. This is an evenly good effort. 35:04 time.
Read more
10 people found this helpful
Helpful
Comment Report abuse

Johnny Heering
3.0 out of 5 stars I'll go somewhere and sing my songs again.
Reviewed in the United States on August 20, 2005
Format: Audio CD
This album came out after Johnny Cash was dropped by his longtime label Columbia Records, but before he made his "comeback" with American Recordings. In many ways, these are the "forgotten" years of Johnny's career. This album is somewhat of a mixed bag. There are some great songs here and there are some not-so-great songs. There are two songs here that I love. One of them is "The Greatest Cowboy of Them All", who is Jesus, by the way. The other one is "Beans For Breakfast", which is a very funny song about a hungry, nasty, lonesome man. Of course, "Hey Porter" and "Wanted Man" are great songs, but these remakes don't quite measure up to Johnny's original versions of the songs. Most of the other songs are decent, if somewhat forgettable. "Angel and the Badman" isn't bad, but it uses the exact same melody as Johnny's old hit "The Man in Black". Of course, I should mention the bonus track, "The Wanderer", which is a U2 recording that Johnny sings. It's a good song, but it doesn't match the "sound" of the rest of the songs on the album. This CD will probably only be of interest to serious Johnny Cash fans, casual fans need not apply.
Read more
7 people found this helpful
Helpful
Comment Report abuse

</><
5.0 out of 5 stars 1991 Classic Cash CD !
Reviewed in the United States on January 22, 2009
Format: MP3 Music
I bought this back in 1991 when it first came out, didnt sell at all, back then, before his 1994 revial of his career, NO ONE cared about Johnny Cash.
This album is superb, it has a very polished sound. The song selection Johnny chose is great, has a very good rock like sound to it in many of the songs.
The song "Going by the Book" was relases as a single and had a very well done video to accompany it, but it rose to just No. 70 on the County charts, what a disgrace from the country music fans.
But as we know, Rick Rubin took Cash and remolded him and made him a legend agian and once agian Cash was cool!

This cd is a excellent statement of very good music, regardless if the country music extablishment never appreciated it.

The Wanderer (with U2) is a bonus track and not on the original release.

john thomas
3.0 out of 5 stars one song
Reviewed in the United States on January 25, 2014
Format: Audio CD
I was never a huge Johnny Cash fan. He would have a song every now and then that I would like and would buy the album it was off of. Songs like Any Old Wind That Blows, A Thing Called Love and Riders In The Sky. And growing up my parents liked him so it seemed like he was playing on the stereo about a 150,000 times a day.
The one song on this cd is Goin' By The Book. With a rock style lead guitar and a story about the second coming this is not your typical Gosphel song. And as time goes by it seems more relevant.
The rest of the cd is pretty good with a couple of re recordings of songs that he had done earlier in his career. Hey Porter and Wanted Man. And the rest of the cd is o.k.
Read more
Helpful
Comment Report abuse
See all reviews from the United States

Charroman
5.0 out of 5 stars The Link to American Recordings
Reviewed in the United Kingdom on May 22, 2012
Format: Audio CDVerified Purchase
Being a lifelong Presley and Rock n Roll fan Johnny Cash has always been sort of on my radar. I had his Sun sides and liked a lot of the hit and well known tracks but was never what you would call a big fan. I liked his songs but often felt his vocal paled in comparison to Presley, Orbison or even Jerry Lee. the first of the Rick Rubin American Recordings got me back into Johnny and I picked up this CD only recently along with a couple of the prison live albums. I have to say that this CD has changed my opinion on his vocal abilities and considering this was cut when he was passed 50 (I think) he sounds in remarkable form and there are a number of great tracks. Beans For Breakfast shows his range beyond that of any track I can recall in his career and is a standout with a lot of humour but the whole album has a class and richness that is worth repeated listening. It was a hint of what was to come at American and works now as a step back to show that he always had that special talent and had lost none of his fire and humour. I have since bought other Mercury recordings from the same period and his re-working of the Sun tracks are good to my ears. On the Mystery cd there is a great re-cut of Hey Porter. Buy this cd you won't be disappointed
Read more
3 people found this helpful
Helpful
Sending feedback...
Thank you for your feedback.
Sorry, we failed to record your vote. Please try again
Report abuse

no name
5.0 out of 5 stars R London
Reviewed in the United Kingdom on January 22, 2013
Format: Audio CDVerified Purchase
Long sought after a lost recording, worth the wait. Not easily found here in the UK good value, will now be content.
Read more
Helpful
Sending feedback...
Thank you for your feedback.
Sorry, we failed to record your vote. Please try again
Report abuse