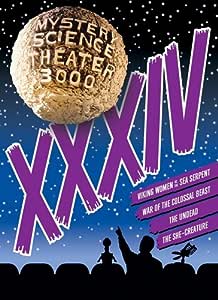 This isn’t long ago, in a galaxy far, far away. This is the not too distant future, next Sunday A.D., so these aren’t the episodes you’re looking for. But know this, friend: Mystery Science Theater 3000 is also an epic tale of heroes and villains, two robot sidekicks, alien races and snappy one-liners. Joel and Mike, the unlucky witnesses to the cheesiest movies in any galaxy, may not have the Force with them, but they have an even more powerful weapon: the riff! And they wield their jokes with sublimely funny accuracy at the dark side of cinema. Join our rebel force in the epic battle against four generally grievous movies from that galactic empire once known as American International Pictures. It will be an attack of the clowns you won’t soon forget.


And may the riff be with you.

War Of The Colossal Beast

4.9 out of 5 stars
4.9 out of 5
59 global ratings
How are ratings calculated?
To calculate the overall star rating and percentage breakdown by star, we don’t use a simple average. Instead, our system considers things like how recent a review is and if the reviewer bought the item on Amazon. It also analyzes reviews to verify trustworthiness.
Top reviews

Michael King
5.0 out of 5 stars WAR OF THE COLOSSAL VIKING WOMEN VS. THE UNDEAD SHE CREATURE
Reviewed in the United States on December 13, 2015
Verified Purchase
Volume 34 of "Mystery Science Theater 3000" has a superb selection of movies. Joel Hodgson hosts "The Saga of the Viking Women and Their Voyage to the Waters of the Great Sea Serpent" (1957). That sword and sandal (or spear and thong) epic was directed by the great Roger Corman. The story is all wet, and the seasick sea serpent makes little more than a cameo in the movie. Watching little Jonathan Haze (Little Shop Of Horrors) defeat muscular Michael Forest (Apollo in an episode of "Star Trek"), was like watching a wrestling match with a predetermined winner. That disc includes the documentary "It Was A Colossal Teenage Movie Machine: The A.I.P. Story," a lengthy, informative look at the legendary American International Pictures movie studio.

"The Amazing Colossal Man" (1957) was directed by Bert I. Gordon (Mr. BIG), and starred Glen Langan as Lt. Col. Glenn Manning. Joel hosted that movie in MST3K's third season. It was released on VHS video by Rhino Entertainment in 1996. Unfortunately, because of copyright problems, the MST3K version of that movie has never been officially released on DVD. Fortunately, I still own the video and a working VCR, and was able to watch that before I watched its sequel, "War of the Colossal Beast" (1958). That film was also directed by Bert I. Gordon (Mr. BIG), but starred Dean Parkin as Lt. Col. Glenn Manning. Since the gigantic man has a disfigured face and only grunts and groans, the difference is negligible. The riffing by Joel and the 'bots is terrific, but what really makes this disc a classic is the inclusion of the short subject, "Mr. B. Natural" (1956), which precedes the movie. Mr. B Natural is an androgynous pixie, played by a woman, who helps a young boy master his instrument. As Joel says, "Mr. B, you're hot!" It's the funniest and most famous of all the MST3K shorts.

Mike Nelson hosts "The Undead" (1957), which was directed by Roger Corman. In that movie, the beautiful Pamela Duncan (Diana Love/Helene) regresses through hypnosis back to a past life in the Middle Ages, where she is about to be beheaded as a witch. Most of this strange film takes place in that time period, with the characters speaking pseudo-Shakespearian drivel. The supporting cast features the gorgeous Allison Hayes as the witchy woman Livia, Mel Welles as the mad gravedigger Smolkin, and Billy Barty as the impish Imp. That movie, as well as the following film, were somewhat inspired by amateur hypnotist Morey Bernstein's book, "The Search For Bridey Murphy."

Mike also hosts the final film in this volume, "The She Creature" (1956). In that movie, Chester Morris (Dr. Carlo Lombardi) regresses the beautiful Marla English (Andrea Talbott/Elizabeth Wetherby) through hypnosis, back to a past life in England over 300 years ago. The slimy Dr. Lombardi continues to regress her to a past life as a prehistoric humanoid type of sea creature, complete with crustaceous cleavage. He uses the physical manifestation of that creature to commit vicious murders. Lance Fuller plays the skeptical Dr. Ted Erickson, the moral counterpart to the villainous Dr. Lombardi. Lance's wooden acting provides humorous fodder for a host segment with Mike and the 'bots. I hope volume 35 of "Mystery Science Theater 3000" is as great as this volume!

Robert I. HedgesTop Contributor: Pets
HALL OF FAMETOP 1000 REVIEWER
4.0 out of 5 stars Mr. B Natural Saves The Day!
Reviewed in the United States on November 26, 2018
Verified Purchase
I hate to rate any MST3K set less than five stars (I think I've only done it once before), but this set is just not my favorite. Sure, some of the riffing is great, and the presence of Mr. B Natural is always a delight in the short paired with "War of the Colossal Beast", but honestly none of the films in this set thrilled me.

"Viking Women vs. the Sea Serpent" is a boring sword and sandal epic from Roger Corman. I never like the sword and sandal films (especially anything with "Hercules" in the title) and despite some decent riffing, this is one better off forgotten.

"War of the Colossal Beast" is the best of the set and is actually the inferior sequel to "The Amazing Colossal Man" from the mind of Bert I. Gordon. Sadly the original was done by MST3K early in their run but is embroiled in a copyright issue which means that it's not available on DVD; "War of the Colossal Beast" picks up as a sequel in which Glenn Manning is now deformed with his face partially scarred to disguise he's being played by another actor (he can only make grunting sounds here as well). It's low budget cinematic cheese that's well suited to the MST3K treatment, and while it's the standout of the set, it's still overshadowed by Mr. B Natural!

"The Undead" and "The She-Creature" are both ultra-slow movies about returning to an earlier time to either be a witch or a prehistoric sea monster. "The Undead" is again from Roger Corman and deals with witchcraft in the Middle Ages, while "The She-Creature" is the marginally more entertaining of the pair, though solely due to the hilarious monster costume. There are a few good riffs to be had in both of these, but there's a reason why I've only seen them once. Yawn.

Nick PusloskieTop Contributor: Classic Rock
5.0 out of 5 stars Typical horrible movies made watchable
Reviewed in the United States on December 17, 2015
Verified Purchase
The 34th set is just as much fan as the 1st. And as usual, only made watchable by the captives on the SOL.

The Saga of the Viking Women And Their Voyage To The Waters Of The Great Sea Serpent. Whew! The name is much better than the movie. What really made this one very nice was the Bonus Feature "It Was A Colossal Teenage Movie Machine: The A.I.P. Story." And the short "The Home Economics Story" is one of the funniest ones they have ever done (and they have done a bunch). This short made the torture of the movie worth it.

War Of The Colossal Beast. Yes, it is as bad as it sounds. Again, what made it worthwhile is the short - "Mr. B. Natural." This has to be THE funniest one ever. How the writers ever get beyond their gag reflexes for a movie like this is beyond my comprehension. So enjoy this piece of....well, you know; the SOL crew suffered to bring it to us.

The Undead. The idea was good. As usual, it was the execution that went horribly wrong. The SOL crew makes it an enjoyable journey nonetheless. Roger Corman does his best to make us lose it - and he nearly succeeded - but not quite.

And finally - The She-Creature. My instinct is to make some jokes about the movie being about my ex, but I won't - although it was very hard not to. The movie, as with the rest of the ones in this release, has to be seen to be believed. And the fact that as the final credits roll, you can say "I made in through another set - bring on XXXV!" That is after your stomach has settled and you get over that they made a movie named after your ex.

Jacquetta Newman
4.0 out of 5 stars Four Stars
Reviewed in Canada on January 17, 2016
Verified Purchase
We were very happy with this collection.
Read more
Report abuse
See all reviews

Page 1 of 1 Start overPage 1 of 1
This shopping feature will continue to load items when the Enter key is pressed. In order to navigate out of this carousel please use your heading shortcut key to navigate to the next or previous heading.
Back
Next
Pages with related products. See and discover other items: mystery science theater 3000, kevin costume