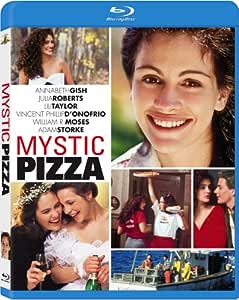 Various (Actor, Director) Rated:
R
Format: Blu-ray
4.7 out of 5 stars 1,325 ratings
Available at a lower price from other sellers that may not offer free Prime shipping.

4.7 out of 5 stars
4.7 out of 5
1,325 global ratings
How are ratings calculated?
To calculate the overall star rating and percentage breakdown by star, we don’t use a simple average. Instead, our system considers things like how recent a review is and if the reviewer bought the item on Amazon. It also analyzes reviews to verify trustworthiness.

C. Ricucci
4.0 out of 5 stars Fifty years later, I remember what it was like to be that age.
Reviewed in the United States on March 10, 2017
Verified Purchase
I'm 70 years old, just watched this movie for the third time, and I love it as much now as the first time I saw it. It is, in turns, funny, dramatic and poignant, with doses of heartache and feel-good. It's about 3 young women in a small fishing town, learning about life and love and their accompanying joys and disappointments. I thought all three actresses in the main roles--Annabeth Gish, Lili Taylor, and the (then) relatively unknown Julia Roberts--were very good in playing their characters, though I especially got a kick out of Taylor as the exuberant JoJo in her struggle to remain true to herself while being passionately in love with Bill (Vincent D'Onofrio) who wanted her to make a life commitment. I'd categorize it as a romantic "dramedy" (Webster says it's a real word). In so many places it reminds me of my feelings and experiences at the age of these characters. I'm sure I'll watch it again.
Read more
46 people found this helpful
Helpful
Comment Report abuse

Sheila LSTop Contributor: Cooking
5.0 out of 5 stars Better than I thought it would be
Reviewed in the United States on October 27, 2015
Verified Purchase
i just finished watching this movie and was pleasantly surprise at how much I enjoyed it. I was just looking for a good comedy & this was listed as a comedy. I would not call this strictly a comedy because there was also some sadness in the movie.

This movie is about 3 women who worked in a pizza place--2 sisters and a friend. Even though the 3 women were so different from each other their relationship with one other worked. Even with their differences they still had two things in common--their loyalty & their love for one another. Even when one of the sisters (Roberts) was angry with her sister, when her sister was hurting and needed someone, Roberts was there for her. This movie was about relationships--relationships between friends, between friends and their families and relationships with the women and their boyfriends.

This is the first time I have seen Julia Roberts in a movie in a long time and she did not disappoint. She gave an excellent performance as well as the other actresses.

There were no sex scenes in it per say, but enough that I would not want young children to see this movie--a little too mature for kids. Some profanity, but only occasionally--not real frequent.

All in all I enjoyed this movie and am glad that I watched it.
Read more
13 people found this helpful
Helpful
Comment Report abuse

Kyle
5.0 out of 5 stars A Very Good RomCom
Reviewed in the United States on January 29, 2019
Verified Purchase
I never really gave romantic comedies, especially ones with Julia Roberts, with the exception of Pretty Woman, a chance, but there is a magic to this film. It's set in its own little universe in a small little town called Mystic. I will definitely come back to Mystic, again. A treat for the lonely.
Read more
7 people found this helpful
Helpful
Comment Report abuse

Iloveromance
5.0 out of 5 stars Absolutely love this movie!
Reviewed in the United States on August 8, 2020
Verified Purchase
This is a wonderful movie about two sisters and a best friend living in Mystic Connecticut as they go through friendship and relationship heartaches. I loved this movie and it's definitionally one of my favorites. Loved Julia Roberts in one of her earliest roles and Anabeth Gish has always been a favorite of mine. Look for a young Matt Damon in this as well. And don't be surprised if you suddenly have a craving for pizza when it's over! It happens to me a lot!
Read more
2 people found this helpful
Helpful
Comment Report abuse

BJL
4.0 out of 5 stars Cute movie for a girls night
Reviewed in the United States on July 21, 2019
Verified Purchase
I really liked this rom-com. I am from a small town and I connect so much with this movie and the young women in this movie. I could see however how it might be a little difficult for a male to understand everything the females are thinking/ why they do what they do. It's a fun watch for a feel good movie. I would honestly watch this again for a girls night. There is a bit of language and scenes where there is sexual interaction hinted at but I don't recall actually seeing anything that involves
seeing any nudity.
Read more
2 people found this helpful
Helpful
Comment Report abuse

Mary Renee
3.0 out of 5 stars Cheesier than pizza
Reviewed in the United States on April 4, 2019
Verified Purchase
It had some moments, but to really like this, you have to like extra cheese. Sometimes the character's laugh for no reason. They're like "Hey what's in that?" and then they all laugh and I'm like "uh... was that a joke, or just a basic inquiry bout pizza and the the director told Julia Roberts to do that laugh thing?" I think Matt Damon is the little brother of her boyfriend. I kept expecting something seriously bad to happen. But it didn't. 3 stars because not all movies need to be focused or exciting. Some can just be lighthearted and realistic.
Read more
3 people found this helpful
Helpful
Comment Report abuse

2eagles
1.0 out of 5 stars waste of time money
Reviewed in the United States on September 27, 2018
Verified Purchase
avoid at all costs even if "free" with prime membership.
Read more
8 people found this helpful
Helpful
Comment Report abuse

Winterbull
5.0 out of 5 stars Love this movie
Reviewed in the United States on March 26, 2019
Verified Purchase
Video was in perfect new condition. Came quickly.
This was and still is a wonderful movie about sisters/friends learning about life and love sometimes the hard way. Julia Roberts does her usual wonderful job bringing the character to life. Ms Conchata creates a wonderful middle aged childless restaurant owner who keeps the 3 waitresses under her wing.
Read more
One person found this helpful
Helpful
Comment Report abuse
See all reviews

Paul
4.0 out of 5 stars Undemanding viewing for a quiet night in
Reviewed in the United Kingdom on May 2, 2015
Verified Purchase
As the billing implies Annabeth Gish was expected to become the big star here, but history hasn't quite worked that way with Julia Roberts being the one to go on to major stardom. Slightly sad really, and given a free vote just from this film AG would be my choice for stardom too.
All three of the friends/protagonists get a fair crack of the whip however, and each has her own appeal. Each of the girls has her own set of dilemmas to handle, and does so in her own fashion. As a team they function well and are ably supported by the lesser characters. There is not a huge amount goes on, but for normal folks life is composed largely of small incidents, which expand in importance to fill whatever drama-gap there may be. A largely credible story and a rather appealing setting is a big help, add some minor humour (yes, the fish incident is funny, but the teeth are funnier IMO) and you have a decent result.
The film is very much of its time, and none the worse for that, with an innocence that is not that common these days. Undemanding viewing for a quiet night in, but neither sloppy nor silly, it gets a solid 4 stars in this corner.
Read more
3 people found this helpful
Report abuse

Kasimir
2.0 out of 5 stars A solid premise, but it all went wrong
Reviewed in the United Kingdom on May 9, 2020
Verified Purchase
"Mystic Pizza" is an American film from 1988, so this one is already over 30 years old. It was made by Donald Petrie and it is one of Julia Roberts' first films, at least in a major role. But not even Roberts can save this film. It's bad through and through and there are very few solid moments only. 2/5 was still really generous here. I do not recommend the watch and I was pretty glad this was over so quickly. At best, a guilty pleasure, but not even as something like that it delivers.
Read more
Report abuse

Don
5.0 out of 5 stars Julia's first?
Reviewed in the United Kingdom on May 23, 2011
Verified Purchase
I believe this to be Julia Roberts' first film, at least in a major role, and well worth a watch. An ensemble piece telling three interlocking stories - not a new idea I know - this film carries the characters well and each thread sits neatly with the others. In fact there is really a fourth tale in which all three prime characters are players.

With many superb films later in her career I might be hard pressed to say it's her finest but it sits easily with the best she has done. The supporting cast does an excellent job but it's easy to tell Roberts is on her way to a top career.

If you are a Roberts fan, don't leave this DVD of your 'to get' list!
Read more
Report abuse

A. D. Gherson
5.0 out of 5 stars Another good Julia Roberts movie.
Reviewed in the United Kingdom on April 8, 2019
Verified Purchase
She is so good and although this is one of her earlier efforts I really like it. Great movie and a ovely story. Highly recommended for a good all round film. See it and enjoy it.
Read more
Report abuse

Roland
1.0 out of 5 stars Unpleasant film, waste of good talent - do not buy.
Reviewed in the United Kingdom on October 11, 2019
Verified Purchase
I only watched a small portion of this dvd as it contained far too much and unnecessary bad language and nastiness. Not to my taste at all. Better it was never made.
Read more
Report abuse
See all reviews