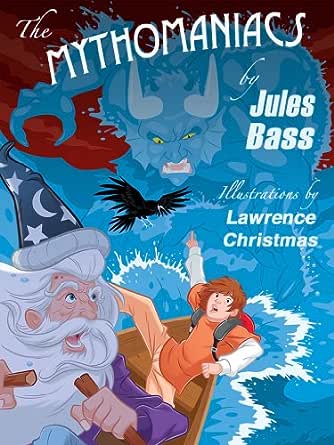 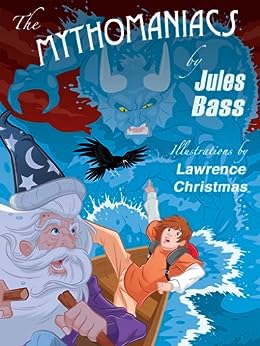 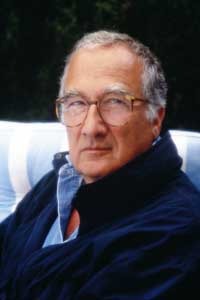 From Luisa LaFleur of The Children's Book Review:
The Mythomaniacs begins with a quote from Edgar Allen Poe, "All that we see or seem [i]s but a dream within a dream." The quote is the perfect opening hint that the reader is about to embark on an extraordinary journey. The book begins with a mystery: Gilbert Myrddin wakes up in a hospital having inexplicably aged several decades. He resembles an old man, complete with grizzled exterior and long, white beard. How has this happened and why? His father, Henry, blames himself for fiddling with the spells in an old family heirloom book. From here, Jules Bass takes the reader on an intricate ride through a series of short stories that provide small pieces to the larger puzzle that is the mystery of Gilbert's sudden aging.

This is a compelling story about a family with the gift of writing, the gift of illustrating and the gift of making magic. Henry, the patriarch of the Myrddin clan, owns a bookstore and writes stories that his son Gilbert illustrates. Each story is teeming with intricate details--some stories are old favorites imbued with a new flavor while others are new stories that are destined to become cherished treasures. ... The author's seamless ability to combine new and old stories and continue the thread within the larger mystery of Gilbert's predicament is a joy to read.

The Mythomaniacs is well-suited to middle-school readers but is also sure to enchant younger readers as a read-along story. ... It is also a great stepping-off point for introducing readers to some of the great classics: such as Edgar Allen Poe's The Raven, Lewis Carroll's nonsense poem Jabberwocky and the legend of King Arthur and the Knights of the Round Table.

Jules Bass has produced several animated films, including The Hobbit, The Last Unicorn, Rudolph the Red-Nosed Reindeer, Frosty the Snowman, as well as several hit animated television shows such as ThunderCats. Jules has written two children's books for Barefoot Books: Herb, The Vegetarian Dragon and Cooking With Herb. They have been translated into seven languages and reprinted in paperback. Herb received a "Pick Of The Lists" from American Bookseller, Lifeworks Magazine's the "Real Life Award," IRA-CBC "Children's Choices Award", "top-of-the-children's list" at American Book Sellers Association. The London Times called Herb one of the best books of the season. It was short-listed for the Kate Greenaway Award and praised by Paul McCartney as: "A magical read for all new thinkers, young and old..." Herb made his television debut on The Food Network.

Bass' new novel for middle-grade readers from Eltanin Publishing, The Mythomaniacs, takes place in Devon, in the south-west of England, and from there transports the reader into many worlds of fantasy including a quest that leads back to Arthurian times.
To learn more visit julesbass.com

4.9 out of 5 stars
4.9 out of 5
13 customer ratings
How does Amazon calculate star ratings?
Amazon calculates a product’s star ratings based on a machine learned model instead of a raw data average. The model takes into account factors including the age of a rating, whether the ratings are from verified purchasers, and factors that establish reviewer trustworthiness.
Top Reviews

Lorna Zelenuik
5.0 out of 5 stars Charming Book!
Reviewed in the United States on January 28, 2014
Verified Purchase
Many years ago my children grew up with "Frosty the Snowman" and "Rudolph, the Red-Nosed Reindeer". When I heard that Jules Bass had written a new children's book, "The Mythomaniacs", years later I had to buy it to see what new magic he had come up with. The author has a marvelous way with words, complimented by the charming illustrations of Lawrence Christmas. This is a book that older children will enjoy, as it will give them the opportunity to use their imagination to visualize what the author is saying. And also this is a book that adults will love to read to the smaller ones using all the appropriate sound effects which will enhance the imaginations of the listeners. This is a five star charming children's book, so run, don't walk to buy it. You and your children won't regret it!
Lornak Zelenuik

JAT-CAT
5.0 out of 5 stars Quests Within A Quest
Reviewed in the United States on March 10, 2014
Verified Purchase
Author, Jules Bass, certainly has a rich and
zany imagination to have created so many wacky
original characters in The Mythomaniacs. There
is the quest - and within the quest many worlds
that our hero, 15 year old Gilbert Myrddin, must
pass through in order to reach his goal – and each
world has its own set of madcap characters:
To name but a few: E. B. Webmaster (the murderous
spider) and his evil crew: The Batty Brothers –
who are introduced with a hilarious creepy poem:

“They’ll claw your eyes and tangle your hair,
Nibble your nose ‘till it’s meatless and bare,
Grasp your tongue in their prehensile paws,
Chomp your ears with their steel-trap jaws,
Bleed out you neck with their dagger fangs,
Beware if the rat-bird who upside-down hangs.”

Not a creature to be unwary of. And there’s
Dapper-Whipper-Snapper (where does the
author get these names?) – with his sharp
frog-tongue…The One-Eyed-SighClops: all
of whom live at the Webmaster’s lair:

“My lair is gone at morning sun,
When misty air is said and done,
And a thousand lovely webs are spun,
Dare visit me – IT WON’T BE FUN !

Young Gilbert meets up with friends who can help:
led by Zook, a misshapen zucchini and his family
of hilarious squashes.

I could go on for many pages of descriptions: of The Cat
Who Could Change Colors, The Giant, Chewlwyd
Mighty-Grasp, The Lucky-Devil, Eviticus (more snake
than man!)...Santa Junior who takes his father’s sleigh
on a joy ride and joyous it’s not to be. My favorite
was EvilFishMaster who walks on land with the aid
of his trident spears…Merlin, as you’ve never seen
him before (Jules paints him as quite the comedian),
along with the beauteous witch, Viv, who pretends to love
him in oder to steal his powers.

And the places: Dead Man’s Garden, The Room Of
Riddles, Pumpkin Island. (Ok. I’ll stop, and allow you
to discover the rest for yourself. All I can say is you
won’t be disappointed as the pages and original,
colorful illustrations by Lawrence Christmas, whiz by.

All this from the writer who gave us ThunderCats!
If you have a KindleFire just tap twice on the illustrations
and they will jump up to full screen I’m sure you’ll
read it straight through (322 pages) as I did at one sitting,
before I sent a copy to my twelve year old grandson who
loves to read mythological stories.

leonora b.
5.0 out of 5 stars A GREAT QUESTING ADVENTURE
Reviewed in the United States on December 30, 2013
Verified Purchase
This is a book of quests and they keep coming as the boy tries
to overcome difficult situations and odds in order to rescue his
sister (a major character) and his friends (I won’t add a “spoiler”
here and tell you what the situations entail; suffice to say that by
the end of the 322 pages I’m sure the reader will be left wishing
it was longer).

I am an adult who loves to read good youth-oriented literature
(like The Wind In The Willows, Harry Potter, The Hobbit, Dickens,
Twain, and especially Seuss and Thurber.) I note that the New
York Times Sunday Book Review now lists middle grade books
as a separate category, and since I like to read this genre of books
before I give them as gifts to my young readers, this is a bonus.
The Mythomaniacs manages to be both myth and a reasonably
believable adventure story at the same time. Not an easy writing task.

I just bought a new Kindle HD and I noticed that if you tap twice on
the illustrations they jump to full screen. Give it a try. I hope that
this is just the start of a series
Read more
Helpful
Comment Report abuse

Howard Brooks
5.0 out of 5 stars MYTHO-MAGIC
Reviewed in the United States on December 11, 2013
Verified Purchase
The Mythomaniacs novel really moves along at
warp speed with new characters and situations
In almost every chapter – while the main plot is
clear and compelling. The novel-length book
starts with a quest and like all quests there are
roadblocks at every turn – all of which have to
be overcome if our hero, fifteen year old Gilbert
is to save the day (I won’t include a spoiler to tell
you how he does this and how close he comes to
failure.

I also loved the fact that I could read the individual
quest stories (which are self-contained) to my younger
sister (who really appreciated the many colorful illustrations
pictures which helped her visualize the action.
Whatever your age you won’t be disappointed.
Read more
One person found this helpful
Helpful
Comment Report abuse

ron massaro
5.0 out of 5 stars Sure to be a Film
Reviewed in the United States on December 14, 2013
Verified Purchase
The Mythomaniacs has all
the ingredients: story and characters that
work in animation – live action and animation.
Reminded me of the film “Honey I Shrunk
The Kids”, which I loved (getting kids and
adults into situations that seem impossible to
escape from). It’s a fast read and the artist who
did the many color illustrations help fuel the
imagination; at least it did mine. I only wished
there were more of them.
Read more
Helpful
Comment Report abuse

Jennifer
5.0 out of 5 stars Move over Harry Potter
Reviewed in the United States on December 14, 2013
Verified Purchase
Give The Mythomaniacs a read...it's one of the more original books for middle-graders that I've read this year. It has a "Merlin" in it-but one you've never encountered before - he's wild and funny and in trouble! The fifteen year old boy sets off on an adventure to save his younger sister after one of his magic tricks goes terribly wrong. Bass' novel sets traps, obstacles-as in any good quest- that involves new sets of characters in every chapter...until the surprising end.
Read more
Helpful
Comment Report abuse

Melissa
5.0 out of 5 stars Fabulous for all ages
Reviewed in the United States on December 17, 2013
Verified Purchase
Bass has hit the mark with this fabulous book. I highly recommend it for anyone that loves, myths, fairy tales, and a fun good read.
Read more
Helpful
Comment Report abuse
See all reviews from the United States