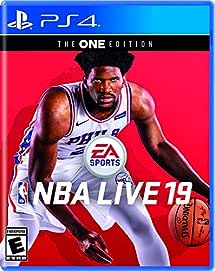 Pre order today and start your quest to global dominance with:

NBA LIVE 19 redefines the way you play a basketball game. Real Player Motion and 1v1 Everywhere gives you control in every possession, providing you the ability to change momentum in any game and dominate your opponent.   Pursue basketball glory with the freedom to create your path in The League and The Streets, in the return of THE ONE.  No longer a solo affair, build your squad of superstars, legends, and cultural icons to join your quest for greatness on courts across the globe.

Real Player Motion: Reimagined animation pipelines and player models redefine every move you make with more authenticity, mobility and responsiveness.  All new animation sequences and signature styles replicate the movements and mannerisms of your favorite NBA greats providing you with a vast variety of player animations and smooth transitions across the court.  From pulling a mid-range basket and dribbling to aggressive defense and post whistle player reactions.

1v1 Everywhere:  Change game momentum on every possession with more 1v1 control and responsiveness in all on-ball opportunities and interactivity against your opponent.  Just like the best players in the NBA, take control and be aggressive on both sides of the ball to create more space between you and your defender to get open and swish threes or lock down opponents and swat the ball to force a turnover on defense.

New Adaptive AI System:  Every Game Feels Different.  Influence the entire game as your behavior and attitude on the court affects how your teammates and opponents react.  Hype up your squad or intimidate opponents and their fans.  You want to try and lock down Westbrook? Be prepared for him to come at you. Trying to dunk on players can make you a target for hard fouls, heated exchanges and trash talk.  NBA players react just like their real-life counterparts, bringing in a new level of emotion and realism into Sports games.

4.4 out of 5 stars
4.4 out of 5
180 customer ratings
How does Amazon calculate star ratings?
Amazon calculates a product’s star ratings based on a machine learned model instead of a raw data average. The model takes into account factors including the age of a rating, whether the ratings are from verified purchasers, and factors that establish reviewer trustworthiness.
Top Reviews

Gregg B.
4.0 out of 5 stars A REAL review from somebody who likes Live AND 2K
Reviewed in the United States on September 11, 2018
Verified Purchase
First of all,let me state that I have played sports games since the days of Bases Loaded,Tecmo Bowl and Double Dribble so I am passionate about these type of games. As a basketball game you truly can't go wrong this year with either Live or 2K,they both are tremendous games each with their own strengths and weaknesses. Since NBA2K debut on the Dreamcast,it has been the ultimate basketball simulation while Live's quality literally became almost unbearable to play,culminating with the low point NBA Live 07 for the Xbox 360,maybe the most broken sports game ever made. 2K has dominated since,for good reason. But last year's NBA Live finally had EA doing what they should've been doing all along. They didn't try to compete simulation for simulation with 2K since that's a battle they currently are light years from winning and embraced trying to be the more FUN game,and they succeeded. It was the first year i played Live more than 2K in years. Sure,2K was the more realistic game and had way more depth to it,but I always put in Live instead. 2k was better,Live was more fun.
Which brings me to Live 19,and they are getting SO CLOSE to being on par with 2K and may even bring in some 2K fans as converts. The gameplay is beyond smooth,graphics are a leap from last year,and player progression is so much fun and there's no grind. 2k19 is a beautiful game as well with terrific gameplay and for hardcore simulation is still the way to go,but microtransactions are holding it back as a smack in the face to the fan base. $60 should be enough for a great experience,not a $100 special package or buying tons of VC for an additional $40. With Live you have everything you need right out of the box and sure,I'm giving it 4 stars and not 5 because the game can get deeper and probably still needs to,but for the more FUN game out of the box,buy this one

Custodio andrade
5.0 out of 5 stars Try the game or things for yourselves you make your own decisions
Reviewed in the United States on September 12, 2018
Verified Purchase
Beautiful game try for yourself and don’t worry about what others are putting into your heads I’ve loved the game each year starting from nba live 15 which was ok then a more improved nba live 16 to nba live 18 nba live 19 has improved with each layer of the game try not to let biased gamers who never touch the game stop you from taking this nba live journey with us if you haven’t already try looking at all the improvements from the first nba live this gen nba live 14 15 16 18 and now 19 one thing as a gamer which I learned years ago which messed up my head and stopped me from buying amazing games from all platforms including ps4 Xbox and Nintendo and last gen also I kept listening to game reviews and others people’s opinions normal people just like me and you which have a label called game reviewers we as gamers have to be our own reviewers and judge for ourselves and try hard to keep biased thoughts out of our bodies can’t tell you how much good games I missed out on cause of what some have said which is my fault but now that I’m older I’ll test out games you can buy these games or rent them used and return them if you don’t like them a lot of stores will do that depending on the stores you go to sorry for keeping this long and I’m not the best at saying what I truly want to say what’s in my head but nba live 19 for has been super fun you can rent the game buy renting I used somewhere so it’s like your not listening to me or another person because if you love them game then hey you made a good decision and took that risk and if you don’t then you have a return period to send the games back as a gamer try not to be a fanboy who’s biased try giving games or things a chance and it might surprise I I’ve gotten a few games over the years that a lot of people said we’re not good but when I tried some for myself I they’ve become some of my favorites games and the ones I didn’t like I don’t play anymore no harm done but hope whoever reads this understands what I’m saying oh and also try only listening to people who have the varified purchase next to there names can’t tell you how much people who haven’t bought something or have it with them leave comments to make the item seem good or bad but yeah to me I’m loving nba live 19 and happy with how the games have gotten more stable and great over the years I’m hoping you like the game as much as I am if not remember you have that return period
Read more
10 people found this helpful
Helpful
Comment Report abuse

T. Herbert
3.0 out of 5 stars Fun but still not there yet
Reviewed in the United States on February 12, 2019
Verified Purchase
I wish I had a ps2. Unfortunately $400.00 plus is too much to ask. If I had a ps2 I would be playing NBA Live 2003. Here we are 15 years later and there still isn't a better basketball game than Live 2003.
Gameplay this year is fun, unfortunately if you are not interested in multi player online, sports games don't care about you. All EA needs to do is to make a multi team franchise mode and this game would finally be on par with the excellent 2003 version. Instead, they only allow you to control one team per franchise and you can't even watch any games that your team is not involved in. Sure, you can always use the play now feature to see other matchups, but that's a waste of time because it has no impact on the franchise. If your team doesn't make the playoffs the season ends. If your team gets eliminated in the playoffs, the season's over. Of course, you could just play on rookie and win every game every year but if your motto is "It's in the game." then it ought to be in the game where you can watch the playoffs play out on the court rather than having some arbitrary simulation in which you're told X team wins.
I could go with the other cartoonish basketball series that does allow multi player franchise mode but that game is just boring. They treat basketball as if it's a fighting game, where you have to do combo button pushes just to dunk the ball.
"The One." If you want your basketball game to play like an RPG, you could enjoy "The One." But if I wanted an RPG, I'd buy an RPG. Just make a multiteam franchise mode with EA style gameplay and you'll have the perfect basketball game.
Online. Let's see, they want you to pay a subscription to play online with a bunch of whiny quitters that don't pass the ball. No thanks.

angelo
5.0 out of 5 stars buono
Reviewed in Italy on May 16, 2020
Verified Purchase
arrivato perfetto
Read more
Helpful
Sending feedback...
Thank you for your feedback.
Sorry, we failed to record your vote. Please try again
Report abuse
Translate review to English

Elizabeth Moore
5.0 out of 5 stars Great in career mode
Reviewed in Canada on January 17, 2019
Verified Purchase
Great game because you do not need to use Wallet $ to do things in career mode. Great game!
Read more
Helpful
Sending feedback...
Thank you for your feedback.
Sorry, we failed to record your vote. Please try again
Report abuse

Page 1 of 1 Start overPage 1 of 1
This shopping feature will continue to load items when the Enter key is pressed. In order to navigate out of this carousel please use your heading shortcut key to navigate to the next or previous heading.
Back
Next
Pages with related products. See and discover other items: PS4 Games Under 20 Dollars