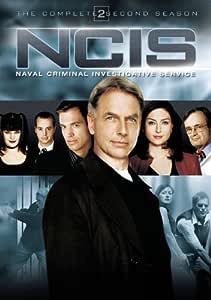 NCIS takes the CSI formula, throws in a good dose of JAG, and comes up with an entertaining series that takes advantage of the actors' likeability. The season begins with the introduction a couple new regulars--agent Timothy McGee (Sean Murray) and assistant medical examiner Jimmy Palmer (Brian Dietzen). And one cast member departs the show by the end of the season. The six-disc set includes all 23 episodes, which aired on CBS during 2004-2005. The show's sophomore year begins with "See No Evil," in which a Navy officer (guest star David Keith) is forced to embezzle millions of dollars, or risk having his wife and blind daughter killed by a kidnapper (played by Tom Cruise's cousin William Mapother). Led by Jethro Gibbs (Mark Harmon), the crack NCIS team comes through to save the day and reveal the mastermind behind the twisted case. Gibbs doesn't display much more emotion this season than he did in the show's debut, but he's just as sarcastic (and even tempered) when being threatened. During one altercation, the mafia threatens to kill his father, brothers and uncles. Non-plussed, Gibbs calmly says that while he has no male relatives still alive, he'd be happy to fax over the numbers of his three ex-wives.

With the help of his ace medical examiner Dr. Donald "Ducky" Mallard (David McCallum from The Man from U.N.C.L.E), Gibbs and his team are almost invincible when it comes to solving complicated crimes. Whether he's piecing together the bones of a body, or performing an autopsy on a crisply burnt poodle, Ducky is matter-of-fact as he talks to his dead "clients." Of his nervous but eager assistant Jimmy, Ducky notes, "He means well, but sometimes I have an overwhelming urge to slap him." This season, viewers get to see the romantic (and slightly gross) side of Ducky as he briefly romances a doctor half this age. Also on hand to aid (and annoy) Gibbs are happy-go-lucky Tony DiNozzo (Michael Weatherly), former Secret Service agent Caitlin Todd (Sasha Alexander), and forensics expert Abby Sciuto (Pauley Perrette), who can solve anything if you say "please" and bring her a Big Gulp to sip. Look for a gentle guest appearance by Charles Durning as a Medal of Honor recipient who wants to turn himself in for killing his best friend and fellow comrade during World War II. While the plot twists won't surprise most viewers, the acting, writing, and spirit of the episode leaves the viewer feeling satisfied. --Jae-Ha Kim

Page 1 of 1 Start overPage 1 of 1
This shopping feature will continue to load items when the Enter key is pressed. In order to navigate out of this carousel please use your heading shortcut key to navigate to the next or previous heading.
Back
Next
Pages with related products. See and discover other items: castle seasons, mystery dvd box set, Explore boxes for cords, Explore lightning fans for iPhones