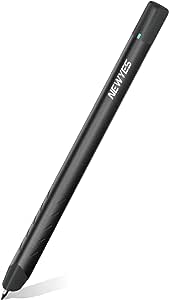 NEWYES Smartpen Sync to The Mobile Devices for Notes with APP (Syncpen 1.0),Black

NEWYES is a professional brands that specialized in electronics and environmental-friendly products. NEWYES Smart Pen has a specially designed algorithm with a unique micro dot pattern and build in camera that captures the exact location of everything you write and draw! Keep the records of your notes forever!

Keep the Records of Your Notes Forever

Multifunctional Usage with Your Phone

Keep the Records of Your Notes Anywhere

3.4 out of 5 stars
3.4 out of 5
18 customer ratings
How does Amazon calculate star ratings?
Amazon calculates a product’s star ratings based on a machine learned model instead of a raw data average. The model takes into account factors including the age of a rating, whether the ratings are from verified purchasers, and factors that establish reviewer trustworthiness.

Sabrina
5.0 out of 5 stars Great Price & Value
Reviewed in the United States on July 22, 2019
Color: BlackVerified Purchase
As a former Live Scribe owner, I purchased the NewYes Smart pen while looking at the updated Live Scribe and Neo Pens. I was attracted to the price as well as the ratings of the other NewYes products on Amazon and online. The pen is larger than a traditional pen but easier to hold than the Live Scribe model. It’s well made of solid lightweight aluminum.

Glows:
1. Great Price
2. Simple set up. Charge it, download the app, write and sync.
3. The notebook is well made. It has a smooth cover and high quality paper.
4. The text recognition is excellent. It captured both my cursive and print. There are a few subtle adjustments that I need to make to my causal writing to make sure it recognizes all characters.
5. There is an ability to record sound as you work via the phone or tablet.
6. Your offline text can be recorded as a video and exported. Users can share their thoughts/ visions.

Grows:
1. It would be great to have a few videos or getting started. However the pen is new to the line. I am sure as more people discover it, there will be more consumer reviews & videos.
2. There are a few nuances to getting used to the software. If you work offline it’s important to open the right note in order to synch the updates. Otherwise, it starts a new note.
3. It only works with the designated notebooks. That is standard with Live Scribe also.

F. Reid Shippen
3.0 out of 5 stars Great- until it isn't. And app has a long way to go.
Reviewed in the United States on November 10, 2019
Color: GreyVerified Purchase
First the good- the pen works well. Fairly easy to set up, if you follow the instructions here on Amazon or online (the manual suffers a bit in translation). For a good few months, the pen worked very well. I found the capture to be very consistent- notes were clear and the system generally worked very well. Their notebook is nicely made (and especially like the cover) and easy to write on. I enjoyed using the pen a good deal... there were only two issues.

First- the app is mediocre at best. It takes effort to import notes, it's not seamless- the pen will occasionally lose contact, and although it has an option to re-import from the pen, this will sometimes split the notes into different "notebooks". The app is mobile-only, so you cant link with a laptop, and the coding is certainly version 1.0- it's clunky and awkward. You can't sort or organize notes, which gets unwieldy when you have a lot of them in there. Combining notes is also not possible- a real issue when the system breaks a note page into different notes in the phone. BUT. The biggest problem is that there's no way to automatically import into other apps (Evernote, Notion, Word) OR choose your export format. So, for example, when using Evernote- you find yourself having to (laboriously) find the note(s), export them to photos, and then import into Evernote in order for them to be readable. Personally, I'm all about having a smartpen just automatically import into an Evernote notebook, like Readdle's ScannerPro can do so easily.

BUT THAT'S NOT THE BIG ISSUE.

A few months after purchase, I went to use the pen and the battery was dead. I plugged it into a battery pack and it worked fine and recharged. Next time I grabbed it, it was dead again. Strange. So I came home and plugged it in, charged it, unplugged it, and let it sit. It's supposed to sleep when inactive, and it doesn't, so the battery dies very fast. Useless. I figured that maybe there's a hard reset that might help, but there's no manual, and no support online. No response from the company either.

So- buy this pen, enjoy it for a few months, then enjoy it further as a lightweight $130 paperweight. No thanks.

note: My guess is that this pen is a Chinese knockoff from stolen IP that's imported and sold by a company stateside. That's why it's poorly supported by its software, there's little to no support and the quality is low.
Read more
14 people found this helpful
Helpful
Comment Report abuse

Amazon Customer
1.0 out of 5 stars Not as good as Livescribe Echo: The recording mechanism isn't consistent or clear
Reviewed in the United States on October 9, 2019
Color: GreyVerified Purchase
I had high hopes for this pen to be a solution rather than using Livescribe. However, the recording mechanism isn't as robust as Livescribe. If you are taking a lot of notes that require recording, you have to remember to select the "recorder" icon. However, the recording doesn't always save to the note. I learned it the hard way this week. I selected the recording option and it did not save to the notebook. I am going to switch back to Livescribe. If you want dependable note recordings...don't use this pen.
Read more
5 people found this helpful
Helpful
Comment Report abuse

R Turner
5.0 out of 5 stars NEWYES Smartpen is a great productivity tool.
Reviewed in the United States on September 27, 2019
Color: BlackVerified Purchase
This pen is easy and efficient to use. It works with the NEWYES Notebook. The pen uses high resolution technology with the microdot pages in the notebook. The pen itself is 160 mm long with a diameter of 10 mm. It is lightweight. The charge last 8 Hrs. Fully charges in 1.5 hours. Charges by Micro USB port on the end of the pen . Attractive and stylish pen.

It has a application to integrate the storage of what's written in the notebook. It is real time sync.
Its nice to have paper copy and digital copy of notes. The app allows for the user to select actual screen text color. It will change in digital copy. You can erase mistakes and edit on digitized copy. Once finalized you can send it to most social media platforms or to email you desire. The app can be downloaded on Google Play, and Apples app store.
Its a great product! I am a engineer so I take a lot of notes and have to constantly distribute them to various platforms. Check out the website at NEWYES.com
Read more

Mitko1982
3.0 out of 5 stars Great, but gaps in transferring to phone
Reviewed in the United States on September 24, 2019
Color: BlackVerified Purchase
Great pen - comfortable, quality of the transcribed input is really good.

Maybe it's just my phone but about 10% of what I write down doesn't transfer to the app. This usually happens when the pen has been disconnected from the phone and I sync the note later on. Sometimes it works, sometimes it only transfers part of the content.

My phone is a Google Pixel 3 in case that helps. A bit frustrating - will update to 5 stars if the software bugs are fixed. If it works well with your phone, it is a 5 star product.
Read more
3 people found this helpful
Helpful
Comment Report abuse

Thomas J.
1.0 out of 5 stars Wasted money unfortunately
Reviewed in the United States on December 29, 2019
Color: BlackVerified Purchase
Translated my notes into ineligible gibberish. Waste of money. Had high hopes. Ordered in August but just getting around to reviewing.
Read more
One person found this helpful
Helpful
Comment Report abuse
See all reviews from the United States

Page 1 of 1 Start overPage 1 of 1
This shopping feature will continue to load items when the Enter key is pressed. In order to navigate out of this carousel please use your heading shortcut key to navigate to the next or previous heading.
Back
Next
Pages with related products. See and discover other items: Explore voice recorder pens for lectures