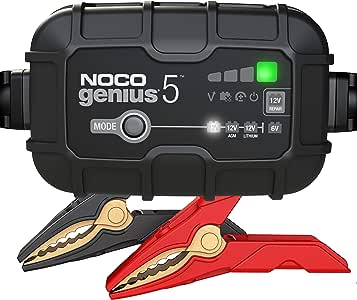 Visit the NOCO Store
4.7 out of 5 stars 1,713 ratings
| 276 answered questions
#1 Best Seller in Boat Battery Chargers
Available at a lower price from other sellers that may not offer free Prime shipping.

4.7 out of 5 stars
4.7 out of 5
1,713 global ratings
How are ratings calculated?
To calculate the overall star rating and percentage breakdown by star, we don’t use a simple average. Instead, our system considers things like how recent a review is and if the reviewer bought the item on Amazon. It also analyzes reviews to verify trustworthiness.

Photo/Video Gearhead
5.0 out of 5 stars Magic
Reviewed in the United States on January 24, 2020
Verified Purchase
My car battery was discharged to the point that my Battery Tender Plus 1.25A charger/maintainer would not even attempt to charge it. I purchased a Noco Genius5 charger/maintainer that has successfully charged my battery without requiring that I activate Noco's 'force mode' that will charge a battery that has become discharged to 0 volts.

Below are three points to keep in mind if you decide to buy a Noco charger/maintainer.

3. As the Owner's Manual indicates, you MUST disconnect your battery from your vehicle prior to activating 12V Repair mode; otherwise, you risk damaging your vehicle's electronics.

Derek
5.0 out of 5 stars It lives, it dies, it lives again!
Reviewed in the United States on February 9, 2020
Verified Purchase
This brought back the battery in my truck (year old or so battery). I drive it 2-3 times a week to keep it chrged and all that (not a daily). One day I came out to zero volts. It sat that way for a week, and no regular charger could keep it alive more than a few hours. I used the force feature to start it, and once it said it was "charged" I switched it to recovery. Might be some damage in the life, but it starts like new.
Read more
49 people found this helpful
Helpful
Comment Report abuse

Pauldo82
5.0 out of 5 stars Big power, small package.
Reviewed in the United States on January 6, 2020
Verified Purchase
I've recharged/repaired the batteries in all my vehicles - two of which are approaching 3 years old. All batteries now start my vehicles as if they are brand new. It's really nice to use as a tender on our weekend car, because it takes up so little space. I'm very happy with this purchase and will probably purchase a smaller version for use with my motorcycle.
Read more
42 people found this helpful
Helpful
Comment Report abuse

TechNerd
5.0 out of 5 stars Excellent New Generation Battery Charger
Reviewed in the United States on January 11, 2020
Verified Purchase
This charger was able to get a troublesome battery all the way up to float voltage (fully charged) with no problem. I had two old chargers that simply couldn't do it, and they are much heavier and bigger.

Michael
1.0 out of 5 stars Not recommended as a trickle charger
Reviewed in the United States on September 6, 2020
Verified Purchase
I purchased this because one of the customer questions on Amazon was answered by the manufacturer as follows:

Question: Can I use this to maintain the charge in my car and leave it unattended for months during winter storage?
Answer:Yes, it can safely maintain a battery all winter long.
By NOCO Support MANUFACTURER on December 9, 2019

However, as you will see on the cover page of the user manual (image attached) it says not to use it unattended. (I added the red highlight in the attached picture.)

I'm sure that it will probably work, but the point is that this is not a must-have purchase. I bought it for peace of mind and convenience on a car that would be stored through the winter. However, that peace of mind is out the window if the manufacturer feels they need to make a disclaimer upfront.

Bottom line, it may work as charger, but it is not (according to the manufacturer's manual) recommended to maintain batteries unattended. I suppose the battery maintainer portion is technically true if you are willing to move into your garage and sleep with your car during the winter months [grin].
Read more

Robert Bruce
5.0 out of 5 stars Battery Charging and Maintenance
Reviewed in the United States on January 25, 2020
Verified Purchase
I have a year 2002 BMW car that's driven infrequently. On several occasions when I went to use it, the battery was weak and was just able to start car. So I bought the NOCO GENIUS5, which is a perfect match for the cars battery type and capacity characteristics. The NOCO GENIUS5 restored the car battery to full charge, and is now operating in maintenance mode. With the GENIUS5, now when I need the car, its ready to go.
Read more
32 people found this helpful
Helpful
Comment Report abuse

LAWSONRANGER
5.0 out of 5 stars Recovered an old battery
Reviewed in the United States on February 26, 2020
Verified Purchase
Tried it out for the 1at time on an old motorcycle battery that had been sitting for years in the basement. Tested the voltage on the battery before and afterwards. Brought the battery back to life.
Read more

brandon
1.0 out of 5 stars DOESN'T CHARGE LITHIUM LIFEP04 TO CORRECT VOLTS
Reviewed in the United States on March 28, 2020
Verified Purchase
I bought 10 chargers as I have lot lithium lifepo04 batterys 100ah. wont charge them to full.. 13.2-13.4 battery average around at max charge and should be 13.6v . all chargers get super hot . so hot it starts to burn your hand!!
Read more
14 people found this helpful
Helpful
Comment Report abuse
See all reviews

Gary J
5.0 out of 5 stars Updated version of the Genius G3500. Seems to work great so far
Reviewed in Canada on May 29, 2020
Verified Purchase
Nice little plug and play charger. Light weight and compact. I had an aging 12V car battery that I hooked up to repair mode. Took all night but in the morning it tested green and holds a charge. Repair mode is actually a "thing" and aging batteries really can be given new life by desulfating. Thought it was just a marketing scam at first but by all accounts it really works.

Note: The repair mode instructions in the manual and online are incorrect. They say "Standby Press and Hold 3 Seconds " which is not correct. The correct way is to Press and Hold (3-4 seconds) to get into 6V mode , then select "Repair" mode. A few YouTube videos also show you how. Once I figured that out it worked great!

Wish it had a 12v power source mode so I could have kept my car electronics working while the battery was disconnected for repair but its not something done that often anyway.
Read more
24 people found this helpful
Report abuse

David Bailey
5.0 out of 5 stars Saved a very expensive and very old Jaguar battery
Reviewed in Canada on June 2, 2020
Verified Purchase
Jag batteries go in the trunk, naturally. They are vented so are quite expensive. I last replace mine nine yrs ago and it has tried to die twice. I started using a trickle charger and that was such an easy fix. Just once a month or so over the weekend... with covid the car sat for 60 days and of course was stone dead, less than 1V. Normal chargers will not work and this NOCO was cheaper than a new battery so i tried it. After two “rescue” cycles the battery took a full charge and is working like new again.
Read more
21 people found this helpful
Report abuse

lordkythe
4.0 out of 5 stars Good quality, works but a bit finicky
Reviewed in Canada on May 23, 2020
Verified Purchase
Interface is fairly tedious to use, even reading the instructions it is not clear. The repair indicator looks like a button, but it is not. A bit of playing around gets you going though. It is not 100% accurate when it comes to securing a good connection to the battery; it will behave strangely if it is not and a visually clean connection is not necessarily good enough to proper operation. If you try to condition/repair/charge and the unit doesn't seem to work well, reseat the connection to the battery and it should solve the problem. It brought back a bad generator battery after proper conditioning cycles (took a few), it's now fully functioning and holding a charge.
Read more
Report abuse

Joshua cormier
5.0 out of 5 stars Very very easy to use, foolproof
Reviewed in Canada on April 29, 2020
Verified Purchase
Vwey amazing, bought this for my 2x90 ah agm batteries in my car, charger is very small, and charges my batteries nicely, trickle charge is going to take me 28 hours for my two (i have huge batteries). I recommend this product 100000% very great product.
Read more
17 people found this helpful
Report abuse
See all reviews
Pages with related products. See and discover other items: Explore gel battery trickle chargers for cars