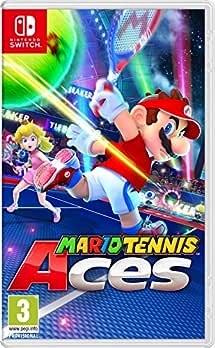 A brand new Mario Tennis game is bringing a new level of skill and competition to Nintendo Switch: Mario Tennis Aces! Mario steps onto the court in classy tennis garb for intense rallies against a variety of characters in full-blown tennis battles. New wrinkles in tennis gameplay will challenge your ability to read an opponent's position and stroke to determine which shot will give you the advantage. And this time the game adds the first story mode since the Mario Tennis: Power Tour game on Game Boy Advance, offering a new flavour of tennis gameplay, with a variety of missions, boss battles and more

4.6 out of 5 stars
4.6 out of 5
1,051 global ratings
How are ratings calculated?
To calculate the overall star rating and percentage breakdown by star, we don’t use a simple average. Instead, our system considers things like how recent a review is and if the reviewer bought the item on Amazon. It also analyzes reviews to verify trustworthiness.
Top reviews

Daniel
5.0 out of 5 stars Fun game!
Reviewed in the United States on December 16, 2020
Platform: Nintendo SwitchEdition: StandardVerified Purchase
I like the game play and the graphics! I play when I need a break from stress!
Read more
One person found this helpful
Helpful
Report abuse

steven Luxmore
3.0 out of 5 stars Not an improvement on previous titles
Reviewed in the United States on December 28, 2020
Platform: Nintendo SwitchEdition: Standard
The ramping of difficulty in this game is out of control. Going from boorishly easy to borderline impossible in 1 match. Trick shots with the thumbstick never seem to move character in correct direction. The game is entertaining but Mario tennis on the N64 and Game Cube are much better games.
Read more
Helpful
Report abuse
See all reviews

Picard
4.0 out of 5 stars Aces shines best in its gameplay
Reviewed in the United Kingdom on June 23, 2018
Platform: Nintendo SwitchEdition: StandardVerified Purchase
What Ultra Smash on Wii U lacked in terms of features, Tennis Aces does a superb job of correcting those mistakes. The truth is, this was a release sorely needed to keep the Mario tennis franchise relevant.

Aces shines best in its gameplay, which is precise, slick and chock full of controls. Some might even say that the sheer number of controls is overwhelming (particularly if you are new to tennis games), but the good news is that you can play in a Simple Mode that limits the gameplay to only the essential inputs.

Zone Shots, Special Moves, slowing down time and more are all incredible additions that can drastically alter your strategy, provided that you master them. And this is where patience is due, as you'll be rewarded for learning how to pull-off these tricks at the right moments. Despite the greatness of these moves, I've actually found the Simple Mode more enjoyable because there is less pressure, though this is subjective.

Swing Mode allows you to play the game using the motion controls of one Joy-Con, which is your racquet. Being a veteran of Wii Sports, I half expected to be swinging the controller whilst the CPU did all the graft, but as it turns out there is still a lot of manual control involved. Not only can you move the player and control the type of contact using the buttons, but synergy between the position of the Joy-Con and the impact on the swing is amazingly lifelike. This may well be the biggest test within the game...

If the game falters however, it's unusually due to a lack of Nintendo polish. Animations and many of the graphics have simply been carried over from Ultra Smash, with the former sometimes looking a little lacklustre and robotic. There are no easy options to select a stadium in free play (Rather, you have to 'deselect' the stadiums you don't want to play on!), few customisation options with regards to equipment and attire, an inability to select the match length, a forced split-screen and no option to change the difficulty level of the CPU.

4/5 seems fair as I've no doubt that many of the missing features could easily be corrected in future updates. What's most important is that gameplay is on the ball, and I can see myself having hours of fun with friends and family.

MT
2.0 out of 5 stars Just stupid
Reviewed in the United Kingdom on July 21, 2018
Platform: Nintendo SwitchEdition: StandardVerified Purchase
Really don't like this game. It's clearly based on the very original Super Tennis from the SNES days (with the 'Change Court' routine) - but that was an awesome, sensible tennis game.

This is just daft and nonsensical. The adventure mode is fun enough I guess - get to hone your skills a bit and try some different things.

There's very little skill involved - you essentially swing and hope - sometimes you hit, sometimes you don't. But all the trick shots, power ups and zone winners and whatever just actually don't make it fun to play at all. Especially against computer components as they seem to power up 20x quicker than you do and they're constantly firing at you. So there's no really long rallies; just a few quick shots and it's point over.

But you have to sit through endless replays/cut screens/flashy graphics and just totally interferes. You end up hammering the A key just to get on to the next point. It's really irritating. And in challenge mode when you lose (and you'll play various levels repeatedly) you have to sit through the same monotonous closing scene again and again. At least you can skip some of the scenes on occasion.

Maybe it'll appeal to someone younger; but for me, it's just not very fun. One of those games that you wouldn't mind picking up for a fiver in a few years but definitely not worth the ticket price, especially when you compare it to epic games like Zelda.

Have got to the final stage of the adventure; always win the doubles game (it's almost as if you literally can't lose that one) but haven't beaten Luigi yet. Suspect I will get bored and just abandon it, rather than actually try and get through and complete it.

Si (product tester)
5.0 out of 5 stars Really cool and fun game for all the family
Reviewed in the United Kingdom on June 22, 2018
Platform: Nintendo SwitchEdition: StandardVerified Purchase
Arrived today in the mail it’s a really amazing I like the fact the you can use the motion part but unfortunately you can’t use it on all the game e.g the tournaments or adventure maybe that will unlock in a update soon
All in all this game is a great game would say it’s like the wii sports
Would also recommend this to all switch game players well worth the money
Read more
13 people found this helpful
Report abuse

Kingoffighters
4.0 out of 5 stars Serving up a treat
Reviewed in the United Kingdom on June 23, 2018
Platform: Nintendo SwitchEdition: StandardVerified Purchase
What a fun game.
This game is so very accessible that anyone can play, yet if you want depth and challenging tennis you can get that here too.
Its a nice looking game with every character really getting to pop from the screen. Courts have various themes and each is lovingly crafted to feel straight from one of the many games that Mario has jumped his way through. Even stage hazards are here to add some chaos to the proceedings which just adds to some of the strategy of play.
Like I say this is accessible to anyone. So much so if you liked Wii tennis the motion control is back and feels like that.....just with a Mario lick of paint.
The adventure mode is here offering a variety of challenges and things to do. Even adopting a small RPG like mechanic where you level up and even aquire new tennis rackets.....that can break so use wisely.
Lastly online works fine. After the open tournament I was skeptical as some connections were awful. But I have yet to experience that here so kudos to Nintendo

This is another great game to add to your switch library. Much like the console its based on its very versatile and all of fun.
Would like to have seen a few more modes personally or even guest characters a la Link, Samus or Kirby. Something like a SSB roster you know
But what's here is fun. And very intense if you play with someone of an equal skill level.
Serve this at your next gathering and hours of fun is guaranteed
Read more
3 people found this helpful
Report abuse

Alexander V.
4.0 out of 5 stars A good Duece, but no Ace
Reviewed in the United Kingdom on July 10, 2018
Platform: Nintendo SwitchEdition: StandardVerified Purchase
I have ways been a Mario tennis fan way back to the N64 days, my favourite being Mario POWER Tennis on the GameCube oh boy that game was an absolute blast! Of course those times have been and gone and now Mario Tennis has needed to Innovate it's formula to stay fresh with all new power moves. If I said I didn't like the game I would be telling find, I really like this game alot but I do feel at the same time I just can't love it like I did the GameCube version.
The story mode is very lackluster to start of with, not mush depth and feels very thrown together. There is only subtitles for when characters talk and there are no cut scenes and I feel like im playing a £30 Gameboy advance game not a £60 Nintendo switch game.
BUT, Let's put that all aside and turn to the gameplay, this is where the game really hits it's stride, singles and doubles matches with a nice solid bunch of characters with or without power moves is a good showing and the game is alot of fun.
All I will say is apart from online play or playing against friends I don't know how much longevity this game will have for you or even myself.
All I know is I love a solid tennis game and if you love mario then this is it.
But I wouldn't hope on this game keeping you completely invested for months to come.
Read more
3 people found this helpful
Report abuse
See all reviews