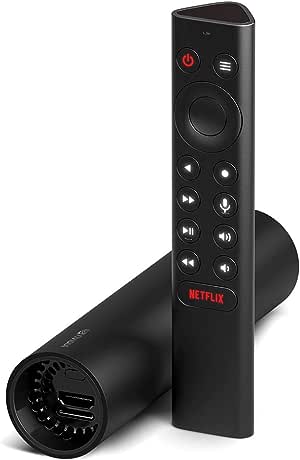 NVIDIA SHIELD TV is the ultimate streaming media player for the modern living room. Enjoy a cinematic experience with the highest quality 4K HDR entertainment, thousands of apps, thousands of games, and the Google Assistant built in. SHIELD TV is a high performance streaming media player, now up to 25% faster with the new Tegra X1+ processor. Enjoy Netflix, Prime Video, and Vudu in stunning 4K with Dolby Vision HDR and Dolby Atmos and Dolby Digital Plus surround sound. Upscale HD video to 4K in real-time using the power of AI and the Tegra X1+ processor. Cut the cord with apps like YouTube TV, Hulu Live TV, Sling TV, and PlayStation Vue. Cast your favorite apps to your TV with Chromecast 4K built-in. Use the built in Google Assistant to see results on your TV, control playback on your favorite shows, share your photos, see your Nest cam, display your calendar, check the traffic, play the latest songs, dim the lights, and so much more, all with your voice. Control SHIELD hands-free with Alexa and Amazon Echo or with Google Home. The all-new SHIELD remote is more advanced than ever with motion-activated backlit buttons, voice control, Bluetooth control, an IR blaster to control your TV, buttons for power, volume, fast-forward, rewind, play/pause, plus a user-customizable button. Plus, never lose your remote with a built-in remote locator. Connect a game controller (sold separately) for access to AAA gaming with GeForce NOW, NVIDIA’s engineering breakthrough in cloud gaming. Instantly transform your SHIELD TV into a GeForce-powered PC gaming rig. With hundreds of supported titles and features like cloud saves and cross-play on laptops and desktops, you can pick up a game from wherever you left off. Level up to SHIELD TV and never look back.

4.6 out of 5 stars
4.6 out of 5
1,887 global ratings
How are ratings calculated?
To calculate the overall star rating and percentage breakdown by star, we don’t use a simple average. Instead, our system considers things like how recent a review is and if the reviewer bought the item on Amazon. It also analyzes reviews to verify trustworthiness.

David S.
5.0 out of 5 stars Fixes all of the problems of past versions
Reviewed in the United States on October 28, 2019
Edition: SHIELD TV
Finally.  I've waited for this device for years.  Every time Apple or Amazon or Roku release a new device I cross my fingers it checks all the boxes, and they never have, not even past Nvidia devices - until now.  There is always one feature missing, at least.

The new Nvidia Shield finally solves the problems that kept them, In my opinion, from making it the perfect streaming box until now.

The primary issues I always had with the previous versions have finally been fixed.

I'm not going to review the software... you either like Android TV or not, I don't feel like I need to get into that.  This is simply about the hardware.

The number one thing, the remote.  My goodness, why did it take so long for someone to make a good remote for a set top box?  The Apple TV remote is easily the worst that has ever been made, and while others make usable remotes they still aren't great.  Nvidia gets the remote right here, really right.  While at first glance the triangle design may seem odd, once you hold it in your hand you realize the benefit of this shape.  It feels really good in the hand.  It's comfortable to hold.  It's hefty and feels well made without being too heavy.  The button feel is really nice.  The back-light is fantastic.  And, finally, power and volume buttons which didn't even take any setup to get working on my LG OLED and Sonos Playbar.  It just worked.  It's a GREAT remote and if you're just using a TV and the Shield it's the only remote you will need.  It has CEC of course, you can use your TV remote... if you really wanted too...

Secondly, they finally added Dolby Vision.  Why on earth did this take so long???  For whatever reason, it's finally here.  FINALLY.

I was always a fan of the previous Shield but stopped using it a couple of years ago.  The incredibly stupid remote and lack of Dolby Vision kept it collecting dust in my closet even though I liked the speed and features.  The old Android interface was never great either but since the past few updates to Android TV it's now pretty good.

And finally, the form factor.  Man, what a stupid looking device until now.  It's like a bunch of people got together and asked themselves how they could design the most ridiculous thing to sit under a TV.  The 'pro' version still looks the same, but the smaller version is finally something sensible.  Like the remote at first glance it may look a bit silly... but if you think about it, and use it, it's a genius form factor.  Rather than a stick or a dongle or something that needs to hang down, sit under, stick out, be mounted etc., it's perfectly designed to plug into your HDMI on one end and power on the other, and hang perfectly behind your TV.  It's really smart design, just like the remote.  I predict you're going to see companies following this design... once you see it you think 'why didn't someone do this before???'.  It just makes sense.  It just works.

2. 32bit app support is a joke when previous nvidia shield and the 2019 pro all use 64bit. i understand that nvidia did this for 2gb ram size but they should just put 3gb for the tube and 4gb for the pro. so cheap.

Jim
1.0 out of 5 stars It's not TV the way you want it.
Reviewed in the United States on October 31, 2019
Edition: SHIELD TVVerified Purchase
No downloader. No browser, yes you can get Puffin, but Puffin no longer supports downloading. No accesss to anything useful in the play store. All the reasons you buy a streaming box are not in this box and it's a real hassel to get them in. With so many point, click and relax boxes out there, hard to imagine wanting to fight this thing.
Read more
143 people found this helpful
Helpful
Comment Report abuse

B-Brewer
2.0 out of 5 stars Crippled Hardware
Reviewed in the United States on November 1, 2019
Edition: SHIELD TVVerified Purchase
This version of the Shield will not run 64 bit applications. There are several games and Apps in the Google PLAY store that are not compatible with this version of the Shield. The picture quality on my 4K set is not as sharp with shield as my Roku Ultra.
The Shield will be going back to Amazon.
Read more
89 people found this helpful
Helpful
Comment Report abuse

The Fox
1.0 out of 5 stars Very limited amount of apps that can run on this unit for the price.
Reviewed in the United States on November 3, 2019
Edition: SHIELD TVVerified Purchase
Very disappointed. Borderline useless since it can not access the full play store. Very limited app access. Way overpriced for not having the capability to run all android apps. I will be returning it.
Read more
86 people found this helpful
Helpful
Comment Report abuse

Toonces
5.0 out of 5 stars They should call it Shield 2
Reviewed in the United States on October 31, 2019
Edition: SHIELD TVVerified Purchase
They fixed all the problems from the original including the remote thank goodness they finally fixed the remote. my Plex streaming on my remote Plex server has never been faster.
Read more
35 people found this helpful
Helpful
Comment Report abuse

TSR.Twins
5.0 out of 5 stars Nice remote Great design space saver
Reviewed in the United States on October 30, 2019
Edition: SHIELD TVVerified Purchase
-Fast, cant beat the speed of Nvidias box. I've probably had about 20 diffrent boxes and by far Nvidia Shield is the fastest, this version just make the experiencethat much better.
-New remote is great. Easy push responseis fast, not sure if theres an air mouse feature but in either case the remote is a great addition.
-Steaming seems to be just as good as before tho I really never had an issue other then where the stream was from.
-The SD card slot is a little tough to access due to the compact design but works fine.
-Great inline design no more worries about where to put it.
- wall plug is more slim line much easier to store and use with multi plug

Amazon Customer
1.0 out of 5 stars Only 32 Bit Android operating system ...
Reviewed in the United States on November 6, 2019
Edition: SHIELD TVVerified Purchase
It is running 32 bit Android system not the 64 BIT as prior Shields and 2019 Shield Pro.... Will not run new 64 Bit Apps.
Read more
31 people found this helpful
Helpful
Comment Report abuse
See all reviews

Page 1 of 1 Start overPage 1 of 1
This shopping feature will continue to load items when the Enter key is pressed. In order to navigate out of this carousel please use your heading shortcut key to navigate to the next or previous heading.
Back
Next
Pages with related products. See and discover other items: Explore tv tuners for laptop