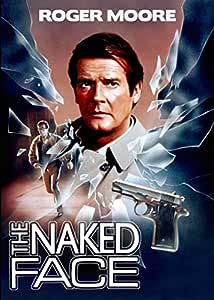 The Naked Face is a shocking and suspense-filled thriller that takes Roger Moore (The Spy Who Loved Me) out of the world of James Bond and into the world equally dangerous and violent. He stars as a doctor targeted for murder in this gripping film version of the Sidney Sheldon best-selling novel wonderfully directed by Bryan Forbes (Seance on a Wet Afternoon). Dr. Judd Stevens (Moore), an affluent Chicago doctor, suddenly finds himself trapped in a waking nightmare, surrounded by shadowy figures bent on his destruction. Who are these mysterious figures and what are their sinister motives? As the mystery deepens, the web tightens around him and when the police appear to have deserted him, Dr. Stevens is forced to confront his would-be assassins alone. The all-star cast includes Rod Steiger, Elliott Gould, Anne Archer and Art Carney.

Fr. Dr. Robert
5.0 out of 5 stars Five Stars
Reviewed in the United States on October 29, 2017
Verified Purchase
Loved this film when it debuted. Overjoyed that it is FINALLY available on DVD
Read more
Helpful
Comment Report abuse

travelwilma
5.0 out of 5 stars Great suspense movie
Reviewed in the United States on June 17, 2013
Verified Purchase
I thoroughly enjoyed this movie because it offered both good acting and suspense. If you want a movie with good acting, suspense plus a surprise ending, this is the one.
Read more
2 people found this helpful
Helpful
Comment Report abuse

Pedro M.
4.0 out of 5 stars Four Stars
Reviewed in the United States on September 14, 2015
Verified Purchase
Not one of Rogers best but I like it...
Read more
One person found this helpful
Helpful
Comment Report abuse
See all reviews

MAD DOG
4.0 out of 5 stars YOU KNOW WHY ROGER MOORE'S CALLED ROGER MOORE DON'T YOU.....
Reviewed in the United Kingdom on October 10, 2018
Verified Purchase
Well well well, this little gem of a film came right out of the blue for me, especially when I thought I knew it all, being a dedicated Roger Moore fan. I own most of his films within my vast collection of DVDs and Blurays, but The Naked Face some how slipped through my fingers. How? God I was mad at myself for not knowing about this wonderful film.

Roger Moore plays Dr Stevens, a Chigago psychiatrist who's suddenly put in serious danger with several attempts on his life. In steps the local plod to investigate, lead by two detectives played by Rod Steiger and Ellliot Gould. However Steigers senior detective holds a grudge agaist Dr Stevens because he gave evidence in court following the murder of his partner which resulted in the perp being successfully being locked up because of his mental state rather than prison. With the bodies mouting up, the cops do their best to put the poor Dr Stevens in frame as prime suspect instead of looking at the investigation objectively.

Sure, the film looks a little visually dated and the plot from the cops point of view has more holes than the local WCs in the park which are peppered with a perverts paradise of viewing stations. But The Naked face is packed full of suspense and some excellent twists and turns that you won't see coming. Not in the way you may think anyway.

Roger Moores acting is pretty much perfect, showcasing how good he was and how largely overlooked he was outside of Bond. His performance in The Naked Face is as good as The Man Who Haunted Himself and nearly as good as Gold. Putting simply, Roger Moore is a legend and one of the best Brit actors we have ever had, and continue to watch on our screens.

The Shape 78
3.0 out of 5 stars Could of Been Better
Reviewed in the United Kingdom on January 20, 2018
Verified Purchase
Not the best film, I found Rod Steiger to be annoying. But I did enjoy Roger Moore's performance, but sadly I found the film to be badly written.

Am not sure you get the same feeling when you read the book, but I found the whole outcome of the story to be rubbish, talk about an anti-climax?, plus the ending scene was laughable.. But overall am glad I watched this film, I mean Roger Moore was pure class. Loved him.

The DVD is region locked, so you will need a region free DVD player. The screen ratio is in 1.85:1, and you do get English Subtitles, but sadly no bonus features.
Read more
2 people found this helpful
Report abuse

Russell Ongaro
3.0 out of 5 stars Roger Moore stars in The Naked face
Reviewed in Canada on February 27, 2018
Verified Purchase
Roger Moore steps back from playing james bond, and stars in this old fashioned thriller about a physiatrist who gets mixed up in a assassination plot because he is treating a patient with a dark secret. I wont spoil it you have to watch but its worth it at the end. The scenes with Rod steiger are pricless because steiger plays a cop and he is very intense and dosent let Moore of the hook when Investigating the crimes that are happening. Art carney has a small role as a quirky PI trying to help Moores character Good film.
Read more
Report abuse

JT
5.0 out of 5 stars What a ripper
Reviewed in Australia on August 16, 2019
Verified Purchase
I’m A Huge Roger Moore fan from the saint to all the bonds he did this movie is excellent
Read more
Report abuse