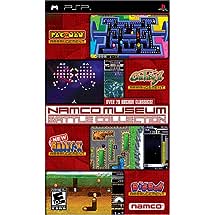 Namco Museum: Battle Collection collects classic 80s arcade hits, while giving a few of them a facelift. Enjoy the original versions of beloved games in all their 8-bit glory, or try the enhanced 16-bit versions for a new take on the classic action. Games include: Bosconian - Survive against an army of space stations, while avoiding asteroids and other obstacles Rally X - Players drive around a maze while avoiding chasing cars, laying smoke screens, and collecting flags Also includes Tower of Druaga, Dragon Buster, Grobda, and King & Balloon Uses the PSP's Wi-Fi capabilities for 4-person multiplayer

4.3 out of 5 stars
4.3 out of 5
133 global ratings
How are ratings calculated?
To calculate the overall star rating and percentage breakdown by star, we don’t use a simple average. Instead, our system considers things like how recent a review is and if the reviewer bought the item on Amazon. It also analyzes reviews to verify trustworthiness.
Top reviews

citan-uzukiTop Contributor: Coloring
5.0 out of 5 stars Arcade Games on the PSP
Reviewed in the United States on February 28, 2007
Verified Purchase
I can remember back in the early 1980's when games such as Pac-Man, Galaga, and Dig-Dug were all the rage. Looking back to those days, I can recall spending most of my allowance in the arcades, playing Dig-Dug and Tempest. Eventually, I grew up, moved on to college, and forgot about video games. It was the introduction of Sony's Playstation that got my interest back in games.

Recently, I purchased an XBox 360. I downloaded Dig-Dug and other arcade games from the Marketplace and started playing these classic games again. I wanted a portable version for my Sony PSP and bought this copy, from a seller here at Amazon.

The games have been updated to work with an analog stick. I can now use the analog stick/button on my PSP to control Dig-Dug, for example. The games are fun again. And this time, I can take the game with me. I can play these classic arcade games on my PSP, wherever I am.

I can easily recommend this game to anyone who is looking for a casual game for their Sony PSP. The graphics are actually much better than the Playstation version. Also, the PSP's WiFi capability will allow you to play against other players, just like you did back when you were in high school (yeah, I'm old).

How does the game play on the PSP? For the most part, playing these games on the Sony portable is satisfying. Ofcourse, you do not have the same controls as the old arcade machines. However, in all fairness, neither can you carry an old arcade machine in your coat pocket. So it is a fair trade-off. If you really want the arcade experience, then get the PS2 version.

Ron S.
4.0 out of 5 stars Super fun, but for how long?
Reviewed in the United States on October 9, 2005
Verified Purchase
This collection really brings you back. This UMD is great fun!! However, it gets tiring fast. How many times can one play PacMan anyway?

I like being able to rotate the display to play the PSP vertically; nice touch!

Haven't had a chance to check out the multiplayer functionality yet, but I'm sure it will be a blast.

I actually prefer the suped up versions of the games to the originals, but playing them again is great!

If you're a nostalgia buff, this game is for you!!
Read more
3 people found this helpful
Helpful
Comment Report abuse

Charliecat
5.0 out of 5 stars So much fun! A lot of great games
Reviewed in the United States on August 10, 2006
Verified Purchase
This is a great game for PSP! It has a lot of the original old arcade style games (Pac Man, Ms. Pac Man, etc.) but also has some update versions of some of the old games. Both are a lot of fun to play. This is the first UMD I've gotten for my PSP and am thrilled with it. It gives me the opportunity to have a lot of different games and only had to buy one UMD. Highly recommend it for anyone who loves the video games of the 80's.
Read more
Helpful
Comment Report abuse

Va.Geo
4.0 out of 5 stars Harder than I thought
Reviewed in the United States on March 25, 2014
Verified Purchase
Although the games are harder than I thought ( or remembered), there is a nice variety of old school games here.... Even if you're gaming Challenged ( I don't want to say a crummy gamer, like me ). Loads of entertainment ( for the kids, as they watch dad muddle his way through, then call for HELP!!!) Worth the price, retrofolks!
Read more
Helpful
Comment Report abuse

conor kelly
1.0 out of 5 stars Didn’t come with case??!!
Reviewed in the United States on December 14, 2017
Verified Purchase
It came with no case. Just a scratched up disk!!!
Read more
Helpful
Comment Report abuse

Pros:
entertaining
fast paced
Lasting quality (since there is no campaign it lasts as long as you want it to)
large selection of traditional arcade games

Cons:
the assortments are quickly finished
some of the games become repetitive quickly
cost

This product may have its pros and cons like any game.
Overall this a great product and one I highly recommend
Read more
One person found this helpful
Helpful
Comment Report abuse

Julio
5.0 out of 5 stars CLASSIC
Reviewed in the United Kingdom on March 26, 2013
Verified Purchase
I bought this because of some classic games from the 80's. But there are some others I really like there.
Read more
Report abuse