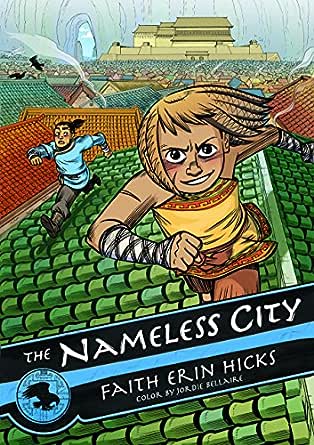 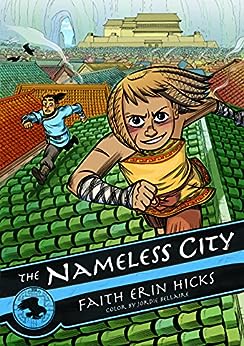 Gr 4–6—Rat and Kaidu meet on the streets of the Nameless City. They are from different worlds: Kaidu is from the Dao clan, the current occupiers of the city, and Rat is a girl living on the streets and struggling to survive under Dao rule. But they form a fast friendship traversing the city using parkourlike exploring. As they get to know each other, they delve into the secrets of the Nameless City's history and come to realize that the only chance the city might have to survive is through unity instead of endless conquest. Though this is a visually appealing, action-packed story from a talented graphic novel artist, the seemingly deliberate lack of any cultural context is distracting and problematic. The story seems to take place in a Chinese-inspired world featuring Chinese junk ships, Chinese-style clothes, and words such as Dao, Yisun, Liao, and Yanjing, yet there is no further evidence that the setting is indeed China or anywhere in Central Asia. This appropriation of disparate elements of Chinese culture comes across as opportunistic; the author's fictional world borrows specific cultural aspects and ignores others strictly for the purpose of storytelling. This makes for a hollow and unsatisfying read on place and culture, and it keeps readers at a distance. Even the name of the book hints at a historically fraught practice: the continued occupation of the city is cited as the reason it is "nameless." Readers will be left wondering which people first named the place. VERDICT The borrowing of vaguely Asian-influenced cultural markers without deeper engagement or authenticity is too troubling to overlook. Not recommended.—Angie Manfredi, Los Alamos County Library System, NM --This text refers to the paperback edition.

"The artwork is breathtaking...lending each panel a richness that appropriately reflects a multifaceted culture." ―New York Times

"Faith Erin Hicks breathes life into her characters with gale-force winds. The Nameless City makes you feel everything its heroes are experiencing inside and out, from adolescent angst to the scrape of terra cotta tiles under a leaping boot." ―Bryan Konietzko, co-creator of Avatar: The Last Airbender

"Faith Erin Hicks is one of the best creators working in graphic novels today and The Nameless City is a fantastic introduction to an exciting new series. Looking forward to reading more!" ―Kazu Kibuishi, author of the Amulet series

"This tale of unexpected alliances has everything: winning characters, a sumptuous setting, and sharp observations about power and history. Hidden depths abound in The Nameless City." ―Scott Westerfeld, author of Uglies andZeroes

"The beauty and construction of the Nameless City will leave you breathless. Faith has created a world so detailed and believable, it makes me want to explore the back alleys to see what is there." ―Jeff Smith, author of the Bone series

"Hicks’s sequential artwork is polished, and though males hold nearly all the political power, the female characters are mighty warriors the men respect (and sometimes fear)." ―Publishers Weekly, starred review

"Offer this winning graphic novel to fans of Fullmetal Alchemist and Avatar: The Last Airbender, who will appreciate its mix of fun and adventure and its exploration of questions of identity, belonging, and history. A superb beginning." ―Kirkus Reviews, starred review

" With comprehensive worldbuilding, well-rounded characters, and entertaining action, this expertly executed story will find a home with a wide variety of readers." ―Booklist, starred review

"Historical fiction fans will likely find this a gripping narrative about how people adapt to, quietly fight against, but mostly just endure lives under the control of others." ―The Bulletin of the Center for Children's Books

Faith Erin Hicks is a writer and artist in Vancouver, British Columbia. Her graphic novels include Zombies Calling, The War at Ellsmere, Brain Camp (with Susan Kim and Laurence Klavan), Friends with Boys, Nothing Can Possibly Go Wrong (with Prudence Shen), the Bigfoot Boy series (with J. Torres), The Last of Us: American Dreams (with Neil Druckmann), the Eisner Award-winning The Adventures of Superhero Girl, and the Nameless City series. --This text refers to the hardcover edition.
Read more

4.9 out of 5 stars
4.9 out of 5
102 global ratings
How are ratings calculated?
To calculate the overall star rating and percentage breakdown by star, we don’t use a simple average. Instead, our system considers things like how recent a review is and if the reviewer bought the item on Amazon. It also analyzes reviews to verify trustworthiness.
Top reviews

Kindle Customer
5.0 out of 5 stars the two somehow become best friends. Unlike a lot of children's fiction
Reviewed in the United States on August 26, 2017
Verified Purchase
Kaidu was born to the warrior caste of the Dao people. The orphan girl, Rat, was born in the Nameless City. They meet when Kaidu is sent to the City to be trained as a soldier. Born to two sides of the war that conquered the City, the two somehow become best friends. Unlike a lot of children's fiction, this book deals honestly with the racism, sexism and class prejudice Rat must suffer. as the daughter of a conquered people. I also enjoyed the way the city was drawn: a vast city spreading to the horizon which is at the same time a trap and a labyrinth for people not born of the City. Another review called this book a classic children's adventure. I agree. The way this book dealt with the serious themes while still being a fantastic adventure story reminded me strongly of classics like the Narnia series and Bridge to Terebithia.
Read more
One person found this helpful
Helpful
Comment Report abuse

Josh H. Knight
5.0 out of 5 stars Great Adventure!
Reviewed in the United States on May 10, 2016
Verified Purchase
Reading graphic artists describe the nuts-n-bolts of their craft, you learn that cityscapes are often viewed as a necessary evil, real back-breaking work to create. That's why Faith Erin Hick's Nameless City is so exquisite and alive as you follow Kaidu and Rat roof-running through their adventure in it. It's a character itself, fleshed out and made three dimensional ... something we think we know but still find surprisingly unique and mysterious. And that's the crux to Ms. Hicks and this novel: She's a master craftswoman who has written a first-rate story that's easy to fell in love with. Thankfully, it looks like it might be a series!
Read more
5 people found this helpful
Helpful
Comment Report abuse

Wonderful friendships, unique characters, a beautifully developed 'history' and geography, and a very meaningful way to consider colonialism, militarism, and 'us vs. them' mentalities. We love her art so much--it inspired my younger daughter to experiment with re-creating some of her favorite panels.

Kindle Customer
5.0 out of 5 stars You won't regret the purchase
Reviewed in the United States on April 7, 2017
Verified Purchase
I have been a fan of Ms. Hicks ever since I stumbled onto her " Demonology 101" website oh some (mumblety mumble) years ago. Her art is not photorealistic, but it is fresh and honest and expressive. I will purchase the next book in this series as soon as I can finish hunt-and-pecking on this damon tablet "keyboard".
Read more
One person found this helpful
Helpful
Comment Report abuse

Fletcher
5.0 out of 5 stars The start of what will a very fun and interesting story
Reviewed in the United States on June 10, 2016
Verified Purchase
Fans of Faith Erin Hicks will not be disappointed with this entry into her bibliography. The art is amazing and the story is good. If I have a complaint, it's that I devoured the comic just a little too quickly, making it feel very short, even though it was a healthy length for a graphic novel. I'm very much looking forward to the next entry in the series.
Read more
Helpful
Comment Report abuse

Angela Boyle
5.0 out of 5 stars Another hit
Reviewed in the United States on June 15, 2016
Verified Purchase
Faith Erin Hicks' art is great, but she is really at her best when she is writing and drawing. The only ripper is that this is the first of a trio! Good character development - I was really rooting for people by the end of the book. And for nearly everyone. It isn't black and white, good versus evil. Everyone is more layered than that.
Read more
Helpful
Comment Report abuse

Julienne G.
5.0 out of 5 stars Great Read. Makes A Great Gift.
Reviewed in the United States on January 23, 2020
Verified Purchase
The Nameless City trilogy is so good. I've enjoyed each part of the trilogy and also gave the books as a gift. The recipient read it immediately and also enjoyed it. Highly recommend this series to everyone!
Read more
Helpful
Comment Report abuse
See all reviews

E1f
5.0 out of 5 stars Action packed adventure novel involving multicultural friendships
Reviewed in Canada on October 10, 2016
Verified Purchase
Read this graphic novel in a single sitting; I lost track of time. When Kids doing things they're not supposed to, it makes for a grand adventure of discovery, especially when living in a new city, with no friends. I look forward to the second book in the series.
One caveat: there is a scene at the end which might be too graphic for children but otherwise fine for teen readers.

Andrew Foster
5.0 out of 5 stars Excellent graphic novel.
Reviewed in Canada on April 5, 2016
Verified Purchase
Fantastic book. Faith Erin Hicks always delivers with great stories with amazing characters, very solid art and engaging writing.
I have really enjoy seeing Hicks' art and storytelling evolve over the years from her webcomics to her published work. This has got to be her biggest and best project yet.
I would recommend this book for girls and guys.
I am eagerly awaiting the next chapter, The Stone Heart." I've already preordered my copy!
Donourself a favour and check this one out!