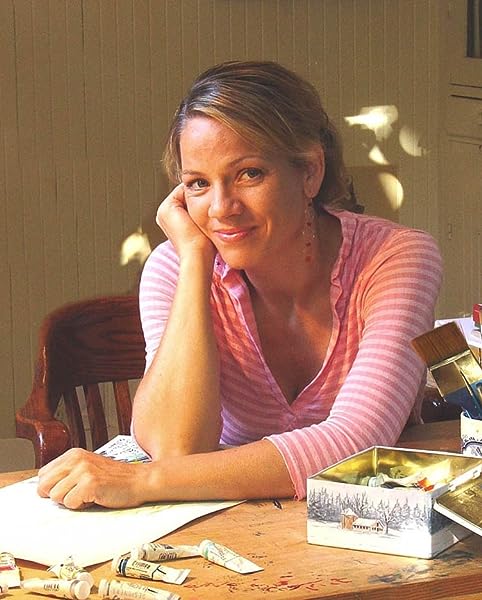 Betty MacDonald was born Anne Elizabeth Campbell Bard in Boulder, Colorado, in 1908. The daughter of a mining engineer, she spent her early years in some of the mining towns of Idaho, Montana, and Mexico. When she was nine, her father took the family—his wife and five children—to Seattle, where Betty lived until shortly after her marriage.

Mary GrandPré is perhaps best known for creating the jackets and illustrations for the Harry Potter books. She has also illustrated The Blue Shoe, a novel for young readers by Robert Townley, as well as many fine picture books, including Chin Yu Min and the Ginger Cat by Jennifer Armstrong and Lucia and the Light by Phyllis Root. You can read more about Mary GrandPré and her work at www.marygrandpre.com.

It was Christmas Eve. Big snowflakes fluttered slowly through the air like white feathers and made all of Heavenly Valley smooth and white and quiet and beautiful. Tall fir trees stood up to their knees in the snow and their outstretched hands were heaped with it. Trees that were bare of leaves wore soft white fur on their scrawny, reaching arms and all the stumps and low bushes had been turned into fat white cupcakes. Mrs. Monday's big, brick Boarding Home for Children wore drifts on its window sills, thick frosting on its steep slate roofs, big white tam o'shanters on its cold chimneys and by the light of the lanterns on either side of the big iron gates you could see that each of the gateposts wore a round snow hat. Even the sharp spikes of the high iron fencehad been blunted by the snow.   However, in spite of its snowy decorations, in spite of the beauty of its setting, and even in spite of its being Christmas Eve, Mrs. Monday's was a forbidding-looking establishment. The fences were high and strong, the house was like a brick fortress and the windows, with the exception of one small one high up and almost hidden by the bare branches of a large maple tree, were like dark staring eyes. No holly wreath graced the heavy front door, no Christmas-tree lights twinkled through the windows and beckoned in the passer-by, no fragrant boughs nor pine cones were heaped on the mantel of the large cold fireplace, for Mrs. Monday, her niece Marybelle Whistle and all but two of her eighteen boarders had gone to the city to spend Christmas. Nancy and Plum Remson (Plum's real name was Pamela but she had named herself Plum when she was too little to say Pamela), the two boarders who remained, were left behind because they had no mother and father. No other place to go on Christmas Eve.

You see, six years before, when Nancy and Plum were four and two years old, their mother and father had been killed in a train wreck and the children turned over to their only living relative, one Uncle John, an old bachelor who lived in a club in the city, didn't know anything about children, didn't want to know anything about children and did not like children. When the telegram from the Remsons' lawyer came notifying Uncle John of the tragic accident and the fact that he had just inherited two little girls, he was frantic.

"Dreadful!" he said, fanning himself with his newspaper. "Gallivanting around the country getting killed. Dreadful and careless! Two little children! Heavens! What will I do with them? I'll have to move from this nice leather chair in this nice comfortable club and will probably wind up washing dishes and making doll clothes. Dreadful! Heavens!" Beads of sweat sprang out on his forehead like dew and he fanned himself some more. It was while he was folding his newspaper to make a bigger and better fan that he noticed the advertisement. It read:

With trembling hands, Uncle John tore out the advertisement and wrote a letter to Mrs. Monday. He received an immediate answer and three days later he was on his way to inspect this delightful boarding home so chock-full of good food and tender loving care for little children.

It was springtime in Heavenly Valley and the fields were golden with dandelions, the slopes were foaming with cherry blossoms, the sky was lazily rolling big white clouds around and meadow larks trilled in the thickets. Uncle John was entranced. "Had forgotten the country was so beautiful!" he said to his chauffeur. "Certainly the place for children. Beautiful, beautiful!"

When they drew up to the imposing entrance of Mrs. Monday's Boarding Home for Children, Uncle John was most impressed. "Nice, solid, respectable place," he said, noting the very large, sturdily built brick house surrounded by the high spiked iron fence."Well built," he said to his chauffeur, who had jumped out to open the heavy iron gates for him.

"It certainly is," the chauffeur said, wondering to himself why a boarding home for little children should have such a wicked-looking fence. Surely not just to keep the rolling lawns from oozing out into the road!

Start reading Nancy and Plum on your Kindle in under a minute.

4.8 out of 5 stars
4.8 out of 5
109 global ratings
How are ratings calculated?
To calculate the overall star rating and percentage breakdown by star, we don’t use a simple average. Instead, our system considers things like how recent a review is and if the reviewer bought the item on Amazon. It also analyzes reviews to verify trustworthiness.
Top reviews

Jim
5.0 out of 5 stars Ageless appeal, Betty MacDonald
Reviewed in the United States on November 6, 2017
Verified Purchase
I have a first edition I received from a bookstore manager when it first came out. She asked me to read it and let her know if I liked it. I enjoyed it then, I bought one for my grandsons, they will let me know. Betty MacDonald was a local author, I heard her speak when I was a child, and I am 74. The book is as good now as it was then.
Read more
10 people found this helpful
Helpful
Comment Report abuse

Bookworm
5.0 out of 5 stars Love
Reviewed in the United States on January 1, 2018
Verified Purchase
My fourth grade teacher, in Oregon was reading this to the class. Before I got to hear the end, we moved to Idaho. 40+ I finally found the book and finally got to read and reread the entire story.
Read more
10 people found this helpful
Helpful
Comment Report abuse

BostonMama
5.0 out of 5 stars Great Christmas Book!
Reviewed in the United States on February 3, 2019
Verified Purchase
I get a Christmas book for each of my children every year, and while my 9 year old (4th grader) still loves and appreciates the family tradition of reading beautiful Christmas picture books together, she also loves novels. At this age, it gets harder to find a good holiday read, but this fit the bill perfectly! My daughter loved this book, and thanked me profusely for getting it for her. I think it will be one of those books she remembers and seeks out for her own children someday. Wonderful holiday read for middle/upper elementary school through middle school kids. Great find! Great stocking stuffer as well.
Read more
3 people found this helpful
Helpful
Comment Report abuse

Kelly
5.0 out of 5 stars Fantastic, imaginative story
Reviewed in the United States on December 3, 2018
Verified Purchase
I’m reading this aloud to my 11 yo son and 8 yo daughter- both love it! Funny, silly, sweet, sometimes sad, and all the fun of an adventure without anything gross, rude, or otherwise objectionable like so much of the modern youth literature. Highly recommend.
Read more
5 people found this helpful
Helpful
Comment Report abuse

Victoria A. Byington
5.0 out of 5 stars Review of Nancy and Plum
Reviewed in the United States on September 18, 2016
Verified Purchase
This wonderful vintage book arrived right on time and in excellent condition. My best friend and I were discussing books we loved as children and Nancy and Plum was her favorite. Since she is having a birthday soon, I thought she would enjoy the memories. I am very happy with my purchase. There is little wear and tear on this book. (Hardback)
Read more
3 people found this helpful
Helpful
Comment Report abuse

Roxie R Tempus
5.0 out of 5 stars Terrific!
Reviewed in the United States on January 7, 2020
Verified Purchase
What a wonderful story to read anytime but especially at Christmastime. You will love Nancy and Plum the second you are introduced to them. You will cheer them on each step of the way. The ending is absolutely perfect!
Read more
One person found this helpful
Helpful
Comment Report abuse

S. Schwan
5.0 out of 5 stars The Comeback of a Childhood Favorite
Reviewed in the United States on December 28, 2011
Verified Purchase
That this book should reappear, eons after my worn-out copy fell apart from loving use by my nieces, delights me. The fact that it is illustrated by Mary Grand Pre of Harry Potter fame just makes it all the better. I had bought a copy-on-demand from an Amazon partner years ago, but it held none of the appeal of this paperback edition.

As a child, I read and reread the story of two resourceful and plucky sisters. My best friend and I, imaginations stimulated by Birdsall's engaging tale, often played "orphans" who had to run away from cruel circumstances and a villainous caretaker. The book encouraged me to dream, to imagine what could "be" in my own life, despite the facts that my orphan status was only that I was 8 years younger that my closest sibling and my villainous caretakers were simply parents who had to work hard to make a living for our family, years before two-parent paychecks were common.

Reading it again brought back the satisfaction of knowing there are kind people in the world to this day--people who make a difference in children's lives. The book is a keeper and one that I am happy to recommend to the latest generation.

Page 1 of 1 Start overPage 1 of 1
This shopping feature will continue to load items when the Enter key is pressed. In order to navigate out of this carousel please use your heading shortcut key to navigate to the next or previous heading.
Back
Next
Pages with related products. See and discover other items: Best Books for 5th Grade Boys