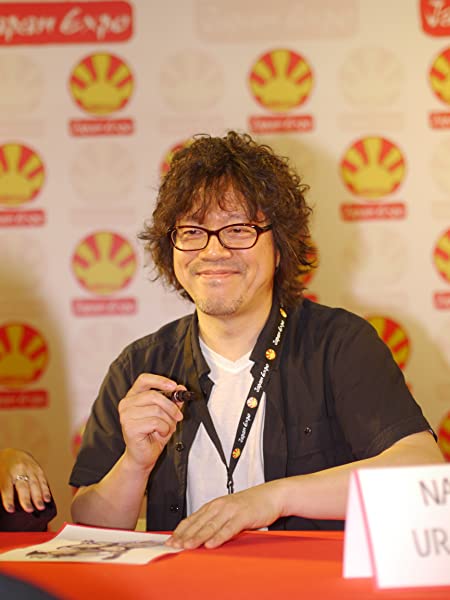 Zac Hanscom
5.0 out of 5 stars Spoiler-Free Review
Reviewed in the United States on January 2, 2015
Verified Purchase
20th Century Boys, Vol. 4: Love and Peace mostly focuses on the mysterious Shogun, who was introduced in the previous volume. He lives in Thailand, he fixes problems, he's made an enemy of the Friends and he might by Kenji's childhood friend, Otcho, who disappeared in Thailand a few years earlier. After about 160 pages about Shogun, Kenji has gone underground, walking the streets in a pink bunny suit and hiding out in a deserted subway station with his family and a few vagrants. Meanwhile, the Friends have become a political party and have widespread power in Japan.

Like the three volumes before it, Vol. 4 ends on a cliffhanger, and unless you're binge reading the entire series, it's a good idea to reread the last few pages of the previous volume before going on to the next one. Otherwise, it's a little hard to get started. I really liked Shogun's story and how he connects to the story in 1969 and 2000 (the year 2000 is technically still the 20th century, for those of you that forgot), and his character is very well fleshed out in this volume. ****1/2
Read more
Helpful
Comment Report abuse

Chihiro
5.0 out of 5 stars Going to sound like a broken record. . . it's great.
Reviewed in the United States on November 17, 2009
Verified Purchase
Urasawa is one of the best storytellers and artists around. I can't say enough good things about 20th Century Boys and Pluto. I'm one of those people who can tell how a tv show or book is going to end at the beginning.
Urasawa keeps me guessing about what will happen next. Please check out Monster and Master Keaton too.
Read more
Helpful
Comment Report abuse

andy
5.0 out of 5 stars Great Story
Reviewed in the United States on August 5, 2018
Verified Purchase
I love the story.. I can see why Naoki Urasawa is considered one of the GODS of Manga.
Read more
Helpful
Comment Report abuse

Kid KyotoTop Contributor: DC Comics
5.0 out of 5 stars Still going strong!
Reviewed in the United States on July 24, 2011
After 4 volumes of build up 20th Century Boys starts to move. Most of the action is now happening in the summer of 2000. The Friends have infiltrated the Japanese government at the highest levels and are moving ahead with their plans.

Most of the book focuses on 'Shogun' a mysterious criminal in Thailand with a soft spot for protecting women. We soon see his role in the overall story.

I really can't say anything more, Urasawa's story is dense and well plotted and still unfolding, but it's clear he has a plan and this is worth the ride.
Read more
Helpful
Comment Report abuse
See all reviews

Amazon Customer
5.0 out of 5 stars Worth the read
Reviewed in the United Kingdom on June 24, 2020
Verified Purchase
This is messed up, love it! You just don’t know who to believe.
Read more
Report abuse
See all reviews