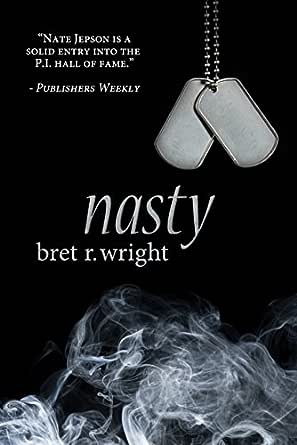 You've subscribed to A Nate Jepson Mystery! We will preorder your items within 24 hours of when they become available. When new books are released, we'll charge your default payment method for the lowest price available during the pre-order period.
Update your device or payment method, cancel individual pre-orders or your subscription at
Your Memberships & Subscriptions
There was an error. We were unable to process your subscription due to an error. Please refresh and try again. 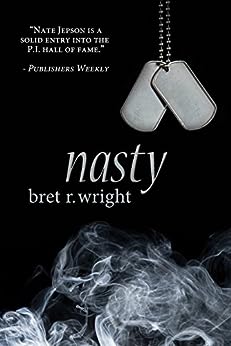 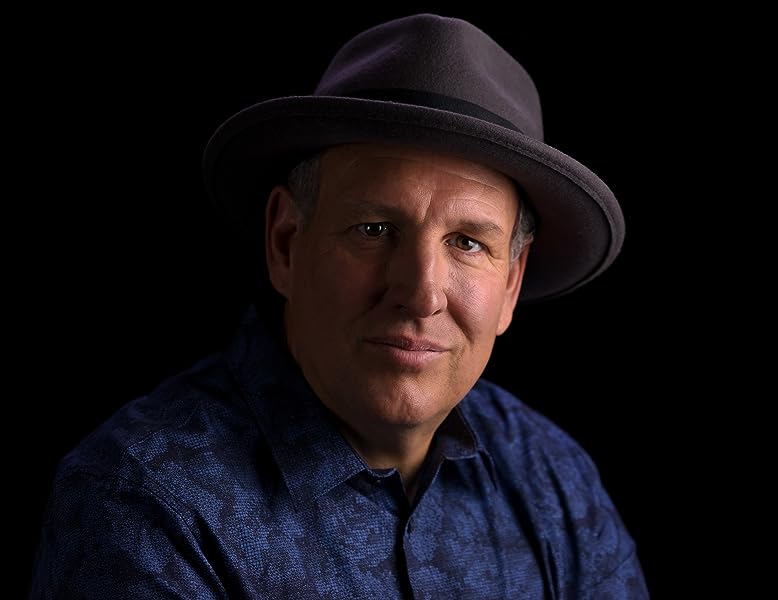 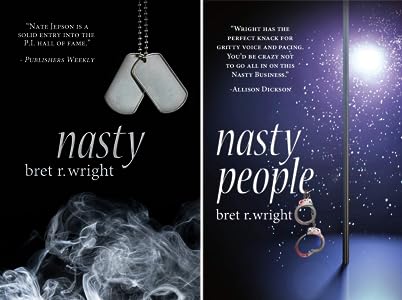 Nate Jepson (a.k.a. Nasty) is a solid entry into the P.I. hall of fame. He's a rugged and tough [former SEAL] who mistrusts traditional law enforcement and who has few but loyal friends. [...] His manners may be rough, but he's charming enough to earn the trust of pretty motel concierges and pseudo-good guys. In fact, one of the latter will end up in his car with a bag full of drug-laced beef jerky, putting him in the midst of an Asian mafia power-grab that endangers not only his life but the lives of all of his friends [...] The scenery and history of the Pacific Northwest play a nice supporting role. --Publishers Weekly

Bret R. Wright s Nasty floors the accelerator on the first page and doesn t hit the brakes until you close the back cover. Nate Nasty Jepson is a Seattle P.I., as adept at busting cheating spouses as he is locating the perfect burrito. Wright dials up the action as Nasty gets caught in a world of kidnapping, drug-smuggling, and murder, and the only thing flying faster than the bullets are Nasty s wiseass asides. Any fan of crime fiction searching for a propulsive, entertaining read to sate their appetite need only remember one thing: It s time to get Nasty. --Kerry Dunn, author of Joe Peace

Bret R. Wright s Nasty floors the accelerator on the first page and doesn t hit the brakes until you close the back cover. Nate Nasty Jepson is a Seattle P.I., as adept at busting cheating spouses as he is locating the perfect burrito. Wright dials up the action as Nasty gets caught in a world of kidnapping, drug-smuggling, and murder, and the only thing flying faster than the bullets are Nasty s wiseass asides. Any fan of crime fiction searching for a propulsive, entertaining read to sate their appetite need only remember one thing: It s time to get Nasty. --Kerry Dunn, author of Joe Peace --This text refers to the paperback edition.

A retired US Navy Chief Petty Officer, Wright has travelled the world extensively. When not abroad, he spent much of his time in the Pacific Northwest, as well as in Southern California. Always one to wear many hats, he is now a secondary English and Social Studies teacher, a freelance journalist, and author. He is married to his high school sweetheart, who was also the editor of their school literary magazine and was the first person to publish his work. He lives with his wife and youngest son, splitting their time between the Colorado Springs area and Santa Fe, New Mexico. --This text refers to the paperback edition.

That and the sentence, "Damn, damn, damn, and damn" are simply brilliant, ha-ha!
The first 20 pages are intense, hilarious, and descriptive as h*ll and had me hooked immediately!
It was tempting to give a chapter-by-chapter (or in some cases, a page-by-page) review as I was reading this because, seriously, this is some GREAT reading!!
Wright’s attention to detail, and the patience in which he writes with is astonishing. And, his sense of humor is friggin’ awesome!
Good example is a chapter title like "Dance of the Middle Fingers". Very original!
(Would make a h*ll of a song title!)
Oh, another thing I loved in "Nasty" is the awesome homoerotic verbal interplay between Nate and his friend (sorry, I'm blanking on his name at the moment).
That sh*t was on par with some stuff Peter Straub has done in a couple of his novels, and what Stephen King did in my favorite chapter of "The Shining", Conversations at the Party.
Something else I really liked is that I could hear music behind certain scenes, and could so easily visualize seeing them as if watching a really good well made movie. But, as visual as it was, and so easy to picture scenes playing out like a movie, I kept realizing there is no way any filmmaker can do it justice, because the best aspect of it all was Bret's 'voice' throughout, the inside thoughts, random musings, unless there was narration throughout.
I used to be proud of my new novel “Secret Agent 00-Behave!” until I started reading this, and now, I'm like forget that garbage, I'm gonna promote this instead, ha-ha. 😉
But, seriously, it is great writing!!
While reading, there was only one time I felt the inner editor in me come out, and it was right after Janis was taken, and Nate started his trek to find info on fireworks.
When it was mentioned that he had no luck at the first three places, I expected it to then jump to him going on to the next place, but then when Wright so brilliantly referenced back to all three places later with important info (or characters), I kind of felt like an idiot for not seeing that coming.
Oh, and really loved the female characters!
This is one awesome novel I can’t recommend highly enough! If you’ve not read it, you are missing out on something really great!
And what an amazing author! Like Ellroy and Leonard combined, but better.
Can't wait to read "Nasty People"
Read more
One person found this helpful
Helpful
Comment Report abuse

The story strings the reader along as a good mystery does, by tantalizing us with unanswered questions and giving us clues that raise still more questions. Even more significantly, the solutions to the various mysteries make sense without being predictable -- something a lot of mystery writers can't pull off.

For me, there were a couple of coincidences that stretched my credulity a bit, and the book could have used one more copy edit (I can relate), but these are minor issues that didn't detract from my enjoyment of the story.

Wright has a solid, well-told, entertaining book his first time out of the gate. I can't wait to read what he offers us next!
Read more
4 people found this helpful
Helpful
Comment Report abuse

Hart Johnson
4.0 out of 5 stars Great debut!
Reviewed in the United States on February 20, 2015
Verified Purchase
Nate Jessup is a PI in the Pacific Northwest and as the story begins, Nate is in the wrong place at the wrong time. He is held up by a desperate man who really just wants help getting away from the beach where they encounter each other, or more specifically, the MEN on the beach who are trying to kill him. Nate ends up with his car exploded and some people after him who think he has something that he doesn't.

The tone of this has a lot in common with the hard boiled detective stories of old, but I felt like it had a lot more heart. Nate isn't a caricature—he has some demons, sure, but he is also balanced—a good person who has just been through some stuff. I also loved the Pacific Northwest setting, though that may be because I have roots there myself.

Overall I loved the tension, story and the nice sprinkling of humor to keep this balanced. And excellent debut.
Read more
2 people found this helpful
Helpful
Comment Report abuse

mzbeastle
4.0 out of 5 stars Hard boiled detective, with a slap of humor and a good story
Reviewed in the United States on March 8, 2019
Verified Purchase
Not only was it fun finding the source of each chapter's title as I read the chapters, the whole ambiance and flow of the story worked for me. It was fun, entertaining and had enough action to keep me going.
I'd definitely read more by this author!
Read more
Helpful
Comment Report abuse

Chris Mandeville
5.0 out of 5 stars Six Star Keeper
Reviewed in the United States on February 20, 2015
Verified Purchase
Why can't I give this 6 stars? Nasty speaks to my soul, from his hilarious insights and one-liners right down to his McSeats. Wright's (or is it Nasty's?) unique voice hooked me immediately, then the pacing, the plot, and the deliciously nasty character left nothing to disappoint. I'd bet 100 greasy, pseudo-meat bi-products that Wright has a best-seller on his hands. And perhaps sponsorship offers from Subaru and the Mukilteo Tourism Board. This one's a keeper.
Read more
2 people found this helpful
Helpful
Comment Report abuse

Elizabeth Puglisi
5.0 out of 5 stars Well done!!
Reviewed in the United States on December 11, 2016
Verified Purchase
I thoroughly enjoyed this book. It's a great PI tale of just my style, ranking up there with Elmore Leonard and Nelson DeMille. There's the right touch of humor, believable characters, engaging story and surprise. The writing is spot on, the pace is lively. I hope we get to see more Nasty in the future.
Read more
2 people found this helpful
Helpful
Comment Report abuse
See all reviews